Media: The Ministry of Defense has postponed the signing of a contract for the supply of MiG-35 to 2016 year 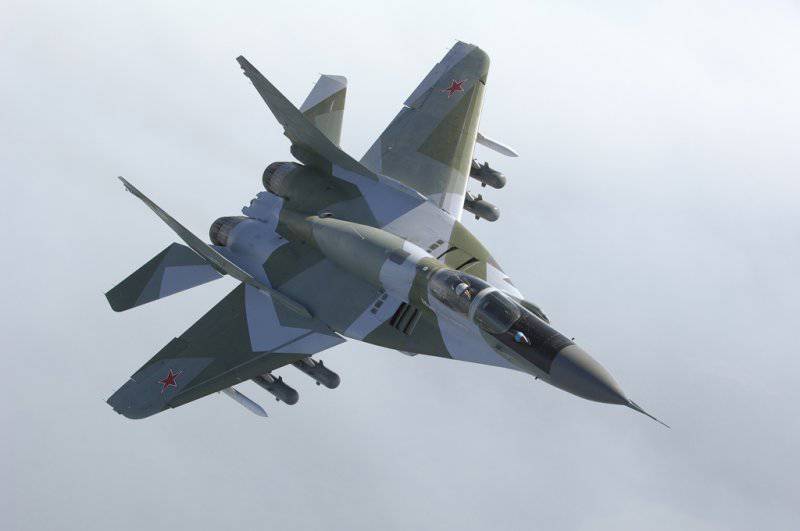 The Russian Ministry of Defense, at the request of the Ministry of Finance, has postponed the signing of one of the largest defense contracts with the Russian Aircraft Corporation (RSK) MiG for the supply of 37 MiG-35 fighters for three years, a high-ranking military official said.

According to the source, the Ministry of Defense and RSK MiG really planned to conclude a contract for 37 aircraft with a total amount of about 37 billion rubles back in June of this year. However, due to the protracted work on the provision and justification of calculation and calculation materials, the government could not sign an order on the definition of a corporation as the sole performer of this task.

“At the same time, we received a proposal from the Ministry of Finance to transfer part of the expenditures allocated under the state armament program to 2014-2016 for the year 2016,” a source told Kommersant in the Ministry of Defense. “After the analysis, we decided to shift the purchase of the MiG-35 to the right.” At the same time, the total number of fighters assigned for procurement in the state armaments program - 37 units - will remain unchanged.
As stated earlier by the Deputy Minister of Armaments Yuri Borisov, the funds allocated for the purchase of some samples of military equipment, "just return to the budget with a request to give them back to us after 2016 of the year." According to Mr. Borisov, the total amount of expenses transferred in this way can be a maximum of 100 billion rubles.

The first official information about the purchase of military fighters MiG-35 appeared in 2012 year. Then the CEO of the corporation Sergey Korotkov, without mentioning the exact number of aircraft, stated that the supply of new fighters to the Air Force will begin in the 2014 year. It should be noted that President Putin promised to bring the cars of this type to the troops soon, during his direct line on 13 TV this April.

Sources close to the United Aircraft Building Corporation (it includes the RSK MiG), argue that the adoption of such a decision rests with the customer: "We must reckon with this." According to one source, for RSK MiG, concluding a contract with the military this year would be a great help for the future - this would make the work of the enterprise more stable by adding additional capacity to its facilities.

The chance for recharging capacity was at RSK MiG in case of winning the Indian tender for the supply of a medium multipurpose combat aircraft (MMRCA), for which Russia put out its MiG-35. The deal included the supply of 126 fighters and was valued at more than 10 billion dollars. However, the MiG-35 eventually dropped out of the competition.

Despite this, to date, RSK MiG fulfills several foreign contracts for the supply of MiG-29 Myanmar and MiG-29K / KUB fighters in India, for upgrading the Indian MiG-29, as well as 1 in June, is preparing to transfer the first batch of six MiG-2013М / М29 to Syria (the entire contract from 2 of the year is designed for 2007 machines).

In terms of the Ministry of Defense, the package is less impressive: in 2012, a contract was signed for 20 MiG-29K fighters and four MiG-29KUBs for the needs of the Naval fleetwhose deliveries are due to be completed in 2015. The current portfolio of orders, numbering about 50 aircraft, is enough to load the corporation for the next two to three years, predicts the director of the Center for Analysis of Strategies and Technologies Ruslan Pukhov. “Therefore, the transfer of this contract for 2016 for RSK MiG is not so terrible,” he added.

However, until the conclusion of the contract for the MiG-35, the RSK MiG may receive additional workload in the form of a contract for the MiG-29CMT fighters. According to sources in both the aviation industry and the Ministry of Defense, the parties are ready to consider the possibility of purchasing a batch of aircraft of this type with a delivery time of up to 2016 of the year. Now in service with the Russian Air Force is 28 MiG-29SMT. They were transferred to them in the 2008 year after Algeria’s refusal to accept them due to quality claims. After the contract with Algeria, concluded in 2006, with the participation of Vladimir Putin, was canceled, Defense Minister Anatoly Serdyukov agreed to take the planes, but they had to be seriously refined, as the Defense Ministry put forward even more serious demands than Algeria. But now the project "SMT" can be resumed.

Ctrl Enter
Noticed oshЫbku Highlight text and press. Ctrl + Enter
We are
The RAC "MiG" are working on the concept of the fifth generation fighterThe 20 rating of the largest arms deals, decisions on which were made in 2012
Military Reviewin Yandex News
Military Reviewin Google News
43 comments
Information
Dear reader, to leave comments on the publication, you must to register.