Tender in the rhythm of samba 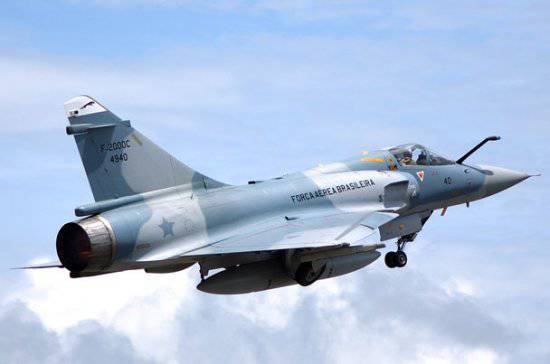 The leadership of the largest state in terms of area and population of South America continues to skillfully maneuver between large aviation companies trying to get the best deal for themselves. It is possible that in the next round of this game, a certain place will again be assigned to Russian aircraft manufacturers, however, the joy in this regard may be premature.

History with the purchase of new fighters for the Brazilian air force goes through a new sharp turn. Dilma Rousseff, who assumed the presidency of the country, annulled the previous results of the qualifying competition, actually launching the competition anew.

... Now everyone has gone out and re-entered.

The classic Latin American “soap opera” about the renewal of the Brazilian fighter aviation fleet has been dragging its twelfth year. In 1999, the government of the republic decided to replace outdated Mirage III aircraft purchased from France in the 70 – 80s. They were planned to be replaced by one or two squadrons (12 – 24 vehicles) of more modern fighters, having spent about 700 million dollars on this.

Competition received the name of FX. Among the main contenders were Mirage 2000BR (a joint bid of the French concern Dassault and the Brazilian Embraer), JAS-39 Gripen of the Swedish concern SAAB and the American F-16E / F from Lockheed Martin. RSK MiG was ready to supply a new modification of the MiG-29CMT. She showed interest in the South American market and Sukhoi AHK, which had successful experience in sales of modernized Su-30 aircraft to China and India. The holding was planning to bring an early version of the Su-35 fighter (Su-27M) to the Brazilian competition, acting jointly with Avibras.

However, the delay in the release of funds delayed the tender. In 2001 and 2003, it was “temporarily put off”, and in February 2004 was finally canceled (for the first time, but as it turns out, not the last time). In July, the Brazilian Air Force 2005 purchased a temporary alternative to replace the outgoing Mirage III - ten Mirage 2000C interceptors and two two-seat Mirage 2000B interceptors. Deliveries from the presence of the French Ministry of Defense allowed to pull time for a few more years. Having received a squadron of "used" fighters (produced in the period from 1984 to 1987 year), the Brazilians slowly launched a new "approach to the projectile."

In November 2007, the procurement program was restarted under the name F-X2. Now three nomenclatures of Brazilian aircraft have come under the sights of modernization. Firstly, these are light tactical fighters AMX A-1 of the joint development of the Brazilian Embraer and the Italian AeroMacci and Alenia (53 machines). Secondly, the American aircraft Northrop F-5E / F Tiger II (57 units). And thirdly, 12 of the already mentioned “deputies” Mirage 2000. In total, it was planned to purchase at least 36 ready fighters, while the additional agreement established the possibility of localized production in Brazil in order to bring the total number to 120 aircraft.

The cost benchmark for 36 procured machines, called the Brazilian government, was 2,2 billion dollars, but experts noted that the total contract for 120 aircraft would be from 6 to 10 billion dollars.

There were a lot of people willing to participate in F-X2. In turn, lined up almost all the major aircraft manufacturing concerns of the world. First, the Europeans came (traditionally - separately). The French offered Dassault Rafale, the Swedes - the same Gripen, all other interested parties - Eurofighter Typhoon.

From the United States came to the competition "Boeing", which wished to sell the Brazilians F / A-18E / F Block II Super Hornet. Lockheed Martin tried to include in parallel the F-16E / F Block 70 duty attendant, unified with the proposal for the Indian MMRCA competition (“MIC” already talked about it in the 45 number for 2010 a year). The idea of ​​supplying the fifth-generation F-35 fighter quickly passed away, mainly for financial reasons, but not least because of serious delays in the machine’s availability schedules (Brazil wanted to update its fighter fleet no later than 2016 of the year, and get export “Lightnings” II by that time was already almost unreal.

The Russian aviation industry made a fairly readable move - put forward a hypothetical export version of the Su-35C for the tender. The second version of the same competition, which was already offered by the Brazilian military, went to the second contest.

The Brazilian competition is a good illustration of a more or less civilized lobbying process in the modern high-tech industry.

Embraer, the national aircraft manufacturer, is the pride of the Federative Republic of Brazil, having broken into the international market for small-size civilian aircraft. It was alleged that high-ranking officials from Russia, in order to advance the Su-35, in the first part of the competition were ready to go for a package approval of an unprecedented reciprocal deal to deploy joint civilian production with Embraer. However, the Brazilians very nervously reacted to the Sukhoi Superjet project, considering it to be a competitor, and imposed conditions that complicated the launch of the Russian airliner into the series, which for obvious reasons was unacceptable.

In turn, Embraer, as a potential co-performer of localized production, was in the habit of choosing its favorites among the contestants. In the first “swim”, the French company Dassault (a minority shareholder of a Brazilian aviation concern) was such a company, as a result of which a joint proposal was put out to the tender conditionally ready for localization — a Mirage 2000-5 version called Mirage 2000BR. "Dassault" solved its problems (2000-e "Mirages" were removed from production in France, and somewhere it was necessary to put the accumulated technological and personnel potential), "Embraer" - their own.

The second part of the "Brazilian ballet" wrote off the "budget" proposal of "Mirage", forcing "Dassault" to play "like an adult": "Rafali" are in service with the French Air Force and are regularly served on all major military aviation tenders, but have not yet won one of them.

In October 2008, Brazil announced that, as a result of the review of the initial applications, the number of applicants is narrowed down to three - Superhorn, Rafal and Gripen. The Russian aviation industry, taking off from the competition, received a “consolation” deal to supply the Brazilian 12 aviators with attack helicopters Mi-35М for 150 million dollars.

In the fall of 2009, the press confidently called the future winner "Rafale". The regional Latin American military has modestly reported that, in their opinion, Rafale is indeed leading. The reaction of the expert community inside Brazil itself was rather ambiguous: for example, some experts believed that the possible purchase of the "French" would be a disaster for the national Air Force. At the same time, discussions began on the resuscitation of the Dassault Union and Embraera on the basis of a future deal.

It was here that Embraer threw out the main trickle, saying that Gripen was much more interesting to him and the idea of ​​developing co-production with SAAB. JAS-39NG, they say, is one and a half times cheaper than the "Rafal" and even more economical to operate. The shocked Frenchmen retired in order to rewrite the technical and commercial proposal, while the Americans, who had abandoned the fantastic idea of ​​selling Brazilian F-35 fighters that were not yet ready, took heart and actively lobbied for "Superhorns".

Against this merry chaos, Dilma Rousseff's predecessor, Luiz Inacio Lula da Silva, made the Solomonic decision: postponed the announcement of the tender results to the 2010 year. Sources in the administration of the head of state indicated that, in principle, the president himself favorably relates to the French proposal, but believes that the price of Rafale is completely inadequate.

The French really, according to some information, demanded 120 8,2 machines a billion dollars (to moderate their appetite after an affront with Embraer to 6,2 billion) and another four for supplying spare parts and providing for 30 years. For comparison: the same source cited the proposals of Saab (4,5 billion for aircraft and 1,5 billion for services) and Boeing (5,7 and 1,9 billion, respectively). True, unlike the competitors, Dassault was ready to meet the Brazilian side in the matter of maximum technology transfer.

2010 year passed in the wires. Accelerating inflation and large external debt strongly demanded savings on heavy military programs. Lula, who was leaving the presidency, did not want to make a final decision, which, whatever it may be, would have put the ruling party at risk of criticism before the elections. Solving the problem of F-X2 fell to his ally and successor Dilma Rousseff.

Sunset on the third circle

Rousseff, the daughter of Bulgarian communist Rusev, is a rather original figure even for Latin America. The radical left, who had participated in the guerrilla war, had a hand even to the "expropriation" of the contents of bank safes, did not make the "unpleasant obvious" choice of the Dassault concern for its predecessor. First, she stopped the tender and launched it again. Now, from a purely formal point of view, Russian companies may again try their luck, and the Brazilian press has already recalled the Su-35, rejected almost three years ago.

So it seems that F-X3 is waiting for us? Not agreeing with the French about discounts on Rafali and not wanting to take the Super Hornets (the last attempt to “break through” the proposal of the Boeing ”at the competition was made by the famous Senator John McCain), to which the same package of modern aircraft technologies is not attached he was ready to provide Dassot, Brazil is trying to make the main stakeholders seriously lose their financial appetites.

Considering the extremely expensive (about 110 – 120 million dollars per car) the all-European “Typhoon” cannot be a scarecrow for the contestants, but the Russian plane will perfectly cope with this role (it’s Su-35 or MiG-35 - it doesn’t matter). Relatively inexpensive and high-quality products of the domestic aviation industry can add nerves to the new qualifying round.

Most likely it is for this purpose that the tender is “rebooted”. It is unlikely that the new administration is ready to buy Russian equipment, but it can be used as a lever of pressure on the Dassault or Boeing (depending on who is more responsive to the transfer of advanced technologies to Brazil). Moreover, the heirs of the founder of the French concern Marcel Bloch, too, have nowhere to retreat: this tender is almost the only real chance for them to grab the first export order, breaking through the wall of neglect of the Rafales from the third world.