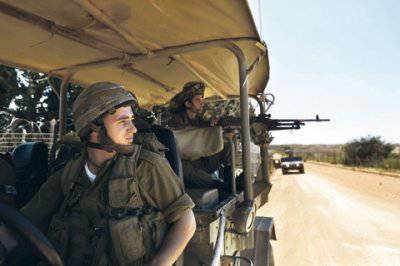 Israel continues to discuss future reform of the army, which, according to military analysts, should lead to an improvement in its technical equipment and a significant reduction in the number of personnel. Some units will be disbanded, and outdated equipment sold by auction. The leadership of the IDF (Israel Defense Forces - OAI) states that the time of large-scale armed conflicts with the simultaneous participation of several Arab countries has passed.


The second Lebanese war became the most serious test for the Israeli army in the 21st century. Intelligence has repeatedly warned of an impending terrorist attack or the abduction of Hezbollah by IDF troops. In this regard, the headquarters of the Northern Military District was forced to increase the combat readiness of the army (March 2006 of the year). After some time, another incident occurred at the border, but in May the war was avoided. In July, the 2006 of the year on the Lebanese-Israeli border was already fierce fighting, and the territory of the country was daily subjected to massive rocket attacks from Hezbollah. Lebanon, as a state, did not participate in this war, although the Shiite resistance militants were based precisely on Lebanese territory. Israel was slow to start a land operation against Hezbollah, and only on the eve of the truce, the IDF managed to launch a major offensive and knock out militants from many key settlements located in southern Lebanon.

After the end of the Second Lebanon War, the Israel Defense Forces began to strengthen their missile defenses in order to protect the country's major cities from possible new attacks from Lebanon and the Gaza Strip. Hezbollah also did not sit on its hands and used the next lull to restore its missile potential. According to foreign intelligence services, the Lebanese resistance received from Syria in 2011, the Scud-D missiles with a range of up to 700 km. In addition, the Syrians can transfer to the militants modern air defense systems. Today, Hezbollah is equipped with a huge arsenal of thousands of rockets in 60.

Recall that the Shiite terrorist group Hezbollah was created in 1982 year during the First Lebanon War. From the very beginning, this organization maintained close ties with Iran. Hezbollah was founded by the spiritual leader of the Lebanese Shiites, Sheikh Muhammad Hussein Fadlallah. The main goals of the grouping are the creation of an Islamic republic in Lebanon and the struggle against the influence of the United States and Israel in the region. In 1984, Americans withdrew troops from Lebanese territory after bold suicide attacks on the embassy and military base. In Lebanon, meanwhile, the civil war continued. The intervention of Syria and Israel did not contribute to the rapid resolution of the internal conflict in the country. The IDF’s military presence in South Lebanon lasted until 2000. Later, Hezbollah only strengthened its position in the region thanks to the support of Tehran and Damascus.

Despite the numerous threats from Iran, Syria and Hezbollah, Israeli generals do not seem to believe that a large-scale military conflict in the Middle East could start. According to Israeli Defense Minister Moshe Ya'alon, in the coming years, the place of armies will be taken by armed organizations without brakes armed from head to toe. “Changes in the region oblige us to start every morning with the question“ What has changed? ”And to align ourselves with reality. The dangers have not diminished, they have simply changed, become more elusive and sophisticated, ”Moshe Yaalon quotes the ITV channel 9.

WITH ACCENT ON ADVANCED TECHNOLOGIES

In the coming years, the IDF is expected to see serious reforms aimed at increasing the effectiveness of the country's armed forces in the fight against the new challenges of the 21st century. The Ministry of Defense plans to pay more attention to raising the effectiveness of intelligence, developing computer technologies, equipping the AOI with high-precision types weapons... At the same time, several tank units and squadrons can be disbanded. Budget cuts are forcing the Department of Defense to take unpopular measures, which, moreover, can undermine the country's defense capability. The government hopes that the IDF will be able to maintain its technological superiority over the enemy armies despite economic difficulties. The United States will continue to provide military assistance to Israel at the same level. One of the priorities is to provide Israeli cities with a reliable missile defense shield. Israel has already deployed five Iron Dome missile defense batteries, which are on alert: in the North - in Haifa and Safed and in the South - in the Eilat region. However, this is clearly not enough to effectively protect the entire territory of the country, Israeli experts say. The US recently provided Israel with additional financial assistance to purchase five more Iron Dome batteries. But even this may not be enough if terrorists launch thousands of rockets on the Israeli North.

Today, the situation in South Lebanon is not much different from the one that developed shortly before the outbreak of the Second Lebanon War. Hezbollah not only restored its missile capabilities, but also increased the number of its personnel. True, seven years ago there was no civil war in Syria. Now Hezbollah is forced to transfer its militants to Syrian territory in order to support government troops fighting against the rebels, who are supported by Saudi Arabia and Qatar. At the moment, Hezbollah is not interested in launching another brawl on the Israeli-Lebanese border. However, Israel has no illusions about Syria and Hezbollah at all. The Netanyahu government openly declares that it will not allow the transfer of modern weapons to the Lebanese resistance. The Israel Defense Forces continue to deliver pinpoint strikes on the territory of a potential enemy, avoiding open war.

Ctrl Enter
Noticed oshЫbku Highlight text and press. Ctrl + Enter
We are
Innovation Day of the Southern Military District: Pictures from the ExhibitionReuters: Israeli army strikes target on Lebanese-Syrian border
127 comments
Information
Dear reader, to leave comments on the publication, you must to register.