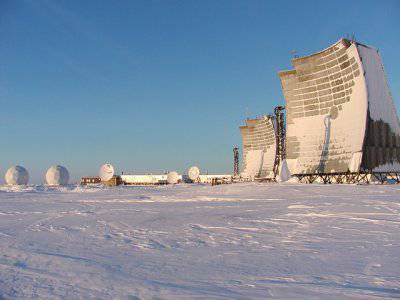 The North Warning System is an advanced series of radars used to warn the United States and Canada of potential threats in the Arctic region of North America.


The Arctic region, which includes most of Canada and Alaska, is often referred to by military analysts in the West as North America's backdoor. The increase in ice melting, which scientists associate with global warming, has opened up waterways and passages in the Arctic, which were previously closed all year round due to harsh winter conditions. In those Arctic places, where the snowy element was rampant half a century ago, preventing absolutely no work at all, today there is a snow removal equipment that clears space for warehouses and landfills.

In the past decades, Russian and Chinese submarines that were there without sanctions were recorded in the Canadian territory of the Arctic, the Canadian press reported. On the Canadian territory of the Arctic, in the depths of the Arctic Ocean, rich oil and gas deposits are contained, and Canadians are expressed in the spirit that Russians and Chinese are about to deprive them of their natural resources. Plain Western paranoia, similar to 50's cries, when spying and talking about the “red threat” flourished in North America.

To combat the “threat” of entering North America’s foreign military across the Arctic, the military of the United States and Canada began to actively cooperate in the installation of the Northern Warning System, a sophisticated radar system that conducts observations on the polar airspace and sends signals when there are violations. The Northern Warning System replaced the former Distant Early Warning Line system, which was installed at the end of 1980-s and was used as the main monitoring tool in the Arctic, both for the United States and Canada.

The Northern Warning System uses a total of long-range 15 radars and a short-range 39. The system covers a vast area that is 4800 kilometers long and 320 kilometers wide. The American and Canadian representatives of the US Department of Defense often call this area the “Arctic springboard”, as it warns them of any presence in the Arctic, whether by invitation or without invitation.
Ctrl Enter
Noticed oshЫbku Highlight text and press. Ctrl + Enter
We are
Overview of combat night vision systems from Western manufacturersBorder and perimeters of the base. Do not cross!
Military Reviewin Yandex News
Military Reviewin Google News
Add a comment
Information
Dear reader, to leave comments on the publication, you must to register.