August 17 2013
45
It is unlikely for anyone today will be the discovery that the President of the United States is not an independent figure. And even more so, few of us are sure that the US president is pursuing a policy in the interests of the people of the USA. So let's try together to figure out who our enemy really is. 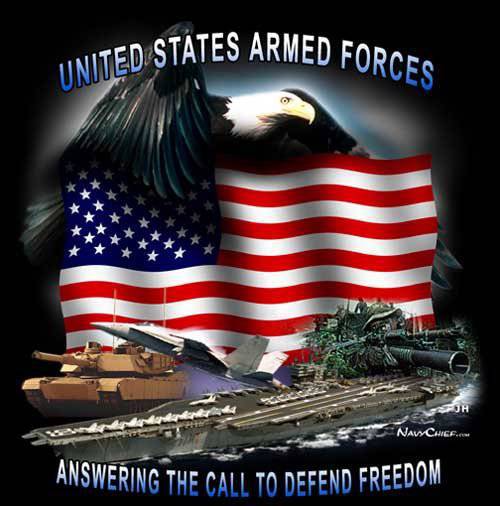 But let’s try to dot the EO together. After all, the American people are in fact deceived, but just fooled by the “MEDIUM OF MASS DISINFORMATION”. The financial oligarchy is our real enemy! After all, if you now ask a sensible American, is he really ready, at the expense of his well-being, to help Egypt fight with Iraq, Libya, and Yugoslavia? Why, for the most part, they will not even find them on the map! Now, within the framework of this article, we will try not to personalize the financial oligarchy, dividing it into competing clans, but try to consider the cumulative effect of the financial oligarchy on modern world politics and the economic environment.

The first thing that catches your eye is that after the collapse of the USSR, the financial oligarchy finally “bit the bit” in foreign policy. Wars against countries with significant deposits of oil, gas and / or an important geostrategic position go on almost continuously. And one more thing that strikes the eye: the US foreign debt, which grew smoothly from 1910 to 1980, turned into a “gallop” under Reagan, and Bush Junior and Obama turned into explosive growth. 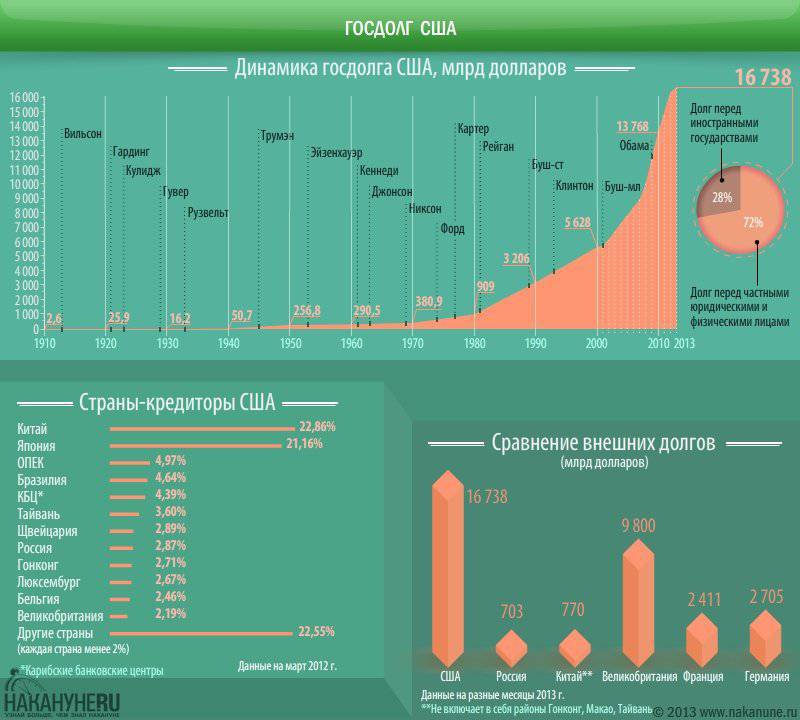 Look closely at the schedule: let's compare it together with the following events: under Reagan, the migration of industrial facilities from the USA to countries with cheaper labor, especially China, began. Let us briefly dwell on this period. What do we see? In these two five-year plans, the structure of US GDP changes from an industrial giant and a locomotive of the world economy to a country with a negative trade balance, and a country whose GDP is formed mainly due to the financial sector. The US industrial belt is starting to turn into a “Rusty Belt”;
We are talking about states that are located from the north of the east coast of the Atlantic to the state of Wisconsin between the coal mining areas of West Virginia from the south and the Great Lakes from the north. Midwest. The territory, of which America was once proud, was distinguished by the greatest concentration of heavy industry and was called an industrial belt. Thousands of factories in this area, as a powerful locomotive, carried the American economy forward, but they spent all the steam and stopped rotting on the rusty rails of capitalism.

Detroit. Part of the "rust belt". Population, you see, is one of the main components of prosperity or decline. Compare: 1950 year - 1,8 million people, 2007 year - 0,8 million. A million people have evaporated in 57 years. No humanitarian catastrophe with relocation - they themselves escaped if they found the strength and means. And silence - "only the dead with braids are standing." Only the wind is walking, flipping through the abandoned papers and blowing debris inside the factory buildings and through the streets, in which the looted houses, music halls, libraries, and schools look like empty sockets. At the beginning of the XXI century in Detroit 80% African Americans and 5% "Latin". New ghetto. It is America that owes the modern civilization to the revival of the slave-owning system in the XVII century in the Roman style and likeness. But if in the XVII – XIX centuries they brought in slaves, in the XX century they began to export plants to other countries, enslaving local residents. Spiral development? Up? Not. The spiral has been lying on its side for a long time, and the motion along it resembles oscillations along a sinusoid with a damped amplitude.

So, back to "our oligarchs." It is worth noting that after changing the structure of GDP, non-financial oligarchs “feed” the USA with tax deductions! They do not have such a "habit" to feed anyone but themselves. Operating profits, as well as tax deductions from financial oligarchs, mostly remain in offshore harbors, and the general wealth of an ordinary American is largely provided by government “loans”. Just a few numbers:

- At present, 48% of Americans consider themselves "low-income" or "poor."
- Last year, 53% of all university graduates under the age of 25 could not find a job.
- According to the latest survey, 63% of US citizens are confident that the American model of the economy is not working.
- The middle class continues to decline: 95% of all jobs lost during the last recession were in the middle class.
- In some areas of Detroit (Michigan), you can buy a three-bedroom house for $ 500.
- The real income of the average American household has fallen by $ 4300 since Barack Obama came to the White House.
- In the United States, more than 56 thousand enterprises were closed with 2001.
--46 405 204 !!! Americans today enjoy free grocery coupons. When Obama came to power, coupons were getting 32 million citizens.

And now the moment on which I would like to focus your attention: what is the value of the American people for the financial oligarchy? The army and the well-established infrastructure of the US armed forces, as well as a fairly high mobilization reserve and, finally, nuclear potential. Security service for the oligarchs! Yes, this is understandable, another thing is not clear: if the American people defend the financial oligarchy, which in itself has no nationality, it is supranational, so why is the oligarchy so with it? I don’t think that tomorrow the oligarchs will come to their senses, and the American people (not yet long-suffering) will return to their usual, rich way of life. While everything goes in the opposite direction. A simple question: why does the oligarchy continue to “merge” the American people? The simple answer is the expensive cost of the army. To fight for the “idea” is not for them. Only for money. And then, pay attention to how many mercenaries in the ranks of the American army serve for "citizenship." This and you can pay less. The US economy, as we see every day, is getting weaker. Worse things are only with world finances: today, 9, the largest US banks, have only potential derivatives risks in excess of $ 200 trillion. If the derivatives market collapses, there won't be enough money in the world to cover all its losses. So, I conclude that the costly "security service" in the face of the United States is beginning to annoy the "owners of the world." Announced a reduction in carrier strike groups http://topwar.ru/24592-chto-stoit-za-sokrascheniem-avianosnyh-grupp-ssha.html. By tracking the further fate of these four AUGs written off, you can try to see the answer: either they just fizzled out (then the abbreviated AUGs will be mothballed). But if they are put up for sale (which is possible), I will mentally put a “cross” on the USA.

If you, dear members of the forum, expect an answer from me, I do not have it. I just want to discuss this issue with you, to find the most similar version together. The ready answer (which is already in the “work”) is with the financial oligarchs, and, what can be said with absolute certainty, it is not spontaneous and we are unlikely to like it. Just to remind you what statements about the USSR and the Russian Federation sounded from public representatives of the oligarchy:

"On the territory of the USSR 15 million people are economically justified." (M. Thatcher).

"I would prefer chaos and civil war in Russia to reunite it into a single, strong, centralized state." (G. Kissinger)

"A new world order is being created against Russia, at the expense of Russia and on the ruins of Russia." (3. Brzezinski)

"Russia, finally, must part with the image of a great power and take some place next to Brazil." (A. Koch)

And going back to the difficult question: If the oligarchs as a personal “security service” continue to use the US Army, then why do Americans live worse by the day? If they are going to bring down the dollar, in favor of Amero, then this is only half the answer. A dissatisfied country cannot have an effective army. And in this context, the unification of the United States, Canada and Mexico alone will not solve the problem, but rather it will get worse. Let's think together. For my part, I’ll nominate one version, which is so far unlikely, but what if? 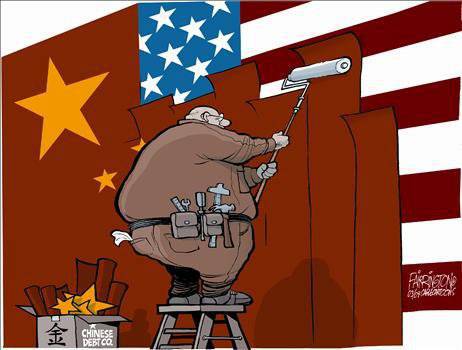 Ctrl Enter
Noticed oshЫbku Highlight text and press. Ctrl + Enter
We are
Commentary on A. Petrov's interview “Fire and Tactics in the Russian Army: Another Look”Military reform as an integral part of the security concept of the Russian Federation: Systematic dynamic assessment
Military Reviewin Yandex News
Military Reviewin Google News
45 comments
Information
Dear reader, to leave comments on the publication, you must to register.