"The End of Spring" 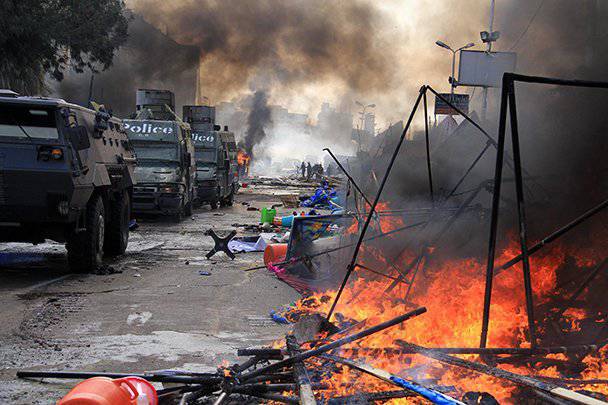 Recent ones news from Egypt are as follows: Egyptian Vice-President ElBaradei resigned, the Egyptian police took control of the main stronghold of the Islamists in Cairo and detained eight leaders of the Muslim Brotherhood.

The events in this Arab country quite logically moved to the second phase, the next after the military coup.

The generals, arresting the former president and a significant part of the leadership of the Muslim Brotherhood, waited time, during which they made a lot of peace-loving, but completely unacceptable for the headless movement of the proposals. After waiting for the protesting supporters of the overthrown President Mursi to demonstrate their incompetence in all their glory, the military, demonstratively shrugging their shoulders, set about stripping.

It cannot be said that everything that happens is the hellish intent of the generals.

They rather acted like real military - according to the situation. The situation dictated quite trivial steps, and the army made them. Since the Muslim Brotherhood came to power and Mursi was elected, both the generals and the civilian authorities of Egypt, who for the most part consist of the same military, only retired, have done what is commonly used in the language of sabotage.

As a result, the situation of diarchy quickly turned into a situation of anarchy, after which, waiting for the frenzied population to remember the pre-revolutionary time as manna from heaven, the military leadership of Egypt fulfilled the "will of the people."

Is it worth it to blame the military? Most likely no.

They acted very logically and quite predictably. The problem lies in the Muslim Brothers themselves. They did not have their own Dzerzhinsky, who would be able to create an Egyptian Emergency Commission to combat counterrevolution and sabotage. As a result, the "brothers" were convinced by their own example of the correctness of the classic who said: "Every revolution only costs something if it can defend itself." For them, no one did their work did not - the result is natural.

Clearing the political field of the Muslim Brotherhood in Egypt will have far-reaching consequences for both the country and the region. Nowhere, in any country of the “Arab spring”, the Islamists have failed to gain a foothold in power and begin to carry out reforms. The practical and managerial failure of theorists from theology has become the logical cause of the collapse of Islamist projects.

The first to surrender their positions were the radicals of Libya, having failed to hold power in the hands of the government of Al-Kiba and ceded it to Ali Zidane and Mahmoud Jibril. So far they have influence and representation in parliament, but now their chances of returning are extremely small. In Tunisia, the military still retain loyalty to the Islamist government of An-Nahd, but its position is already very shaky.

Of course, both Egypt, and Tunisia, and Libya were able to start their counter-Islamic counter-revolution, including due to the fact that Qatar gradually surrendered and finally finally surrendered its position as a sponsor of the Muslim Brotherhood movement.

Qatar has extremely serious financial problems, and now it faces more mundane problems of survival. The Islamists abandoned by them are trying to find a way out one by one - and, say, Hamas is already returning, like a lost daughter, under the paternal hand of Iran. The Egyptian "brothers" in this situation do not shine - they managed to make too many enemies in the last year.

The army imposed a state of emergency in Egypt - for a month so far. This month will obviously be lived for good reason: the military will try to decapitate the entire movement and to take the most strict approach to any attempts by the Islamists to return even the current status quo.

150 – 160 killed during the time since the coup was not such a significant payment for appeasing the largest Arab country, which is in a state of discord and collapse.

Ctrl Enter
Noticed oshЫbku Highlight text and press. Ctrl + Enter
We are
If not for the generals ... Shameful history of the Ukrainian armyFor a revolution or a counter-revolution? The role of the military in the politics of Egypt
Military Reviewin Yandex News
Military Reviewin Google News
45 comments
Information
Dear reader, to leave comments on the publication, you must sign in.