The war of the future is lost yesterday 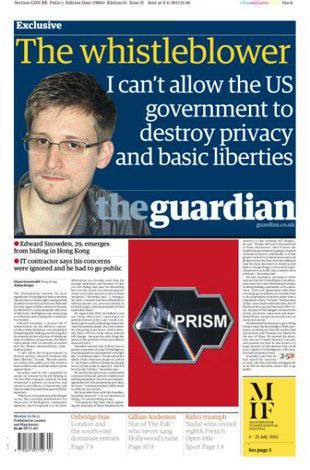 The English newspaper The Guardian recently published a new revelation of the American Snowden, who had found refuge in Russia. He confirmed what experts have long known: the top-secret US National Security Agency (NSA) has 700 servers around the world that control all global information flows transmitted over the Internet. The system has the code name XKeyscore.


There is such a server in Moscow, presumably in the building of the American embassy. Moreover, the private American office, under the roof of which Snowden worked for the NSA, has its branch in Moscow already since 1991 of the year!

For the uninitiated, it can be explained that a server is a computer separated from a group of personal computers to perform any service task without direct human intervention. In other words, it is an automatic device that can control any computers connected to it and filter any information passing through these computers.

It would seem that there is something like an American server in Moscow and millions of computers in the apartments of Russian citizens, as well as on the tables of state officials of the government of the country, Rosatom, officers and generals of the FSB, the Ministry of Defense, the Ministry of Internal Affairs ... But what about?

The flow of information spread throughout the world, like water through pipes. First, a huge reservoir, such as a freshwater lake, then a smaller tank, then a district or village water tower - and so on to the end user. On the Internet, the role of the main storage and information distributor is performed by giant servers located in the USA. And since Internet users are becoming more and more every day and the flow of information is growing almost exponentially, the NSA is building in Utah (USA) another center for collecting and storing intercepted information on 5 Zettabyte. He will be commissioned in a month.

The next question is whether they intercept sensitive information in Russia? We have almost all of the country's leadership, including the president, left the walls of the KGB of the USSR, where they knew how to keep state secrets. But why the same Snowden literally said this: “I, sitting at my desk, can peek over the correspondence of anyone - from you or your accountant to a federal judge or president, if I have a personal email inbox”. And the thing is this.

All commands, e-mail, correspondence, and distribution of documents pass through devices called routers. These are devices that redirect computer traffic from one network to another. In fact, it is an analogue of a water distributing tank, when from one water flows into other tanks, and already from them, through small pipes it diverges to the end users. On the Internet, the flow of information from your computer first enters this same router, in which your destination is determined. And only after that, on other lines with your routers, does your mail reach its destination.

Here, as they say, the American dog is buried. The fact is that almost all routers installed throughout the world and throughout the Russian Federation were developed in the state of California (USA) by Cisco Systems, Inc. According to Igor Belov, an authoritative independent expert in the field of IT-technologies, these are “black electronic boxes”, stuffed with secret codes and control protocols for users. Moreover, according to US law, secret for anyone, but not for the NSA.

It is in these “boxes” that the primary analysis of the passing information is made, after which everything that deserves the attention of foreign intelligence comes to those storage servers. Even the computer networks of our defense and government organizations that are protected from outside interference do not bypass this American technology at some stage of information exchange: it is installed everywhere.

The question is - what to do? According to Mr. Belov, it is still too early to panic. There is time to rectify the situation. Russia has long developed a complete analogue of American technology that is compatible with all existing computer systems. The equipment is called "Rus M" and differs from products Cisco Systems, Inc. only secret codes and stitched protocols. This software is written by our specialists and is open to Russian special services. It is clear - closed to American. But one thing: "Russia M" does not interest anyone in Russia. Neither the FSB, nor the Defense Ministry, nor the government, nor the presidential administration. Although, according to Mr. Belov, the cost of refitting the most vulnerable Moscow computer networks is only a few tens of millions of dollars.

These organizations have long been notified of the development. Moreover, Russian routers are successfully operating in one of the largest districts of Moscow. In the meantime, our government departments are buying American spyware for state money, which is installed throughout the country. It has not happened, it is clear that in the event of a conflict brewing through the so-called remote access, our opponent will be given a command to completely block all computer networks in Russia. Or their work in the "glitch", which is even worse. The last war of Americans against Iraq took place just like that. First, the entire control system in the country, including air defense, was turned off, and only then the invasion began.

Something similar is already happening with us. For some reason, all super-reliable “Proton” missiles with GLONASS defense satellites, without which high-precision rocket weapon becomes useless, fall before reaching the calculated orbit. Our deputy prime minister blames the mechanics for this, without understanding the main reason.

Meanwhile, the Russian leadership continues to show the Americans a piece in their pockets. This Kremlin fig, backed by menacing words, sometimes looks rather menacing. But Big American Brother continues to brazenly sit at your home and knows everything about you: what you breathe, where you hide the loot stolen from the state, what kind of bomb you are preparing for it.

True, you can reassure yourself that there will be no hot war. Has it been lost for a long time?