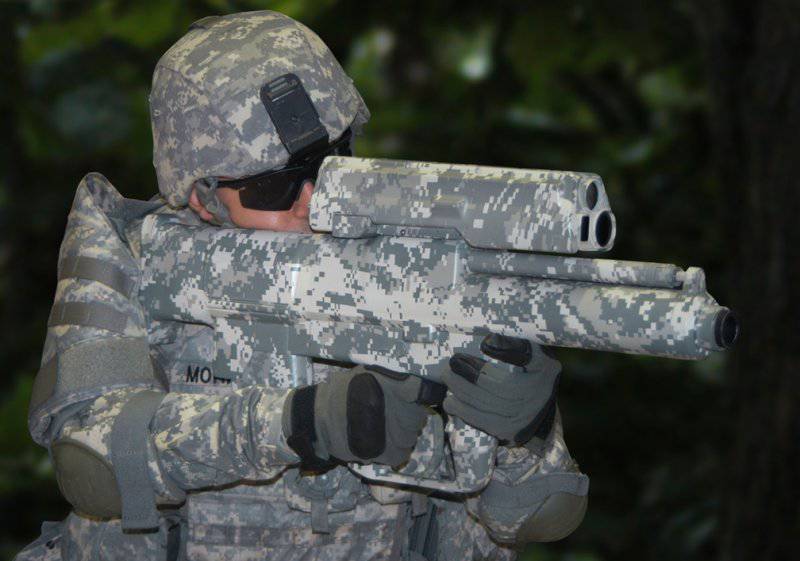 The most perfect sample of personal weapons an infantryman, an 25-mm XM25 grenade launcher, will launch into the series. The use of these weapons in Afghanistan was so successful that the American army plans to begin mass purchases. 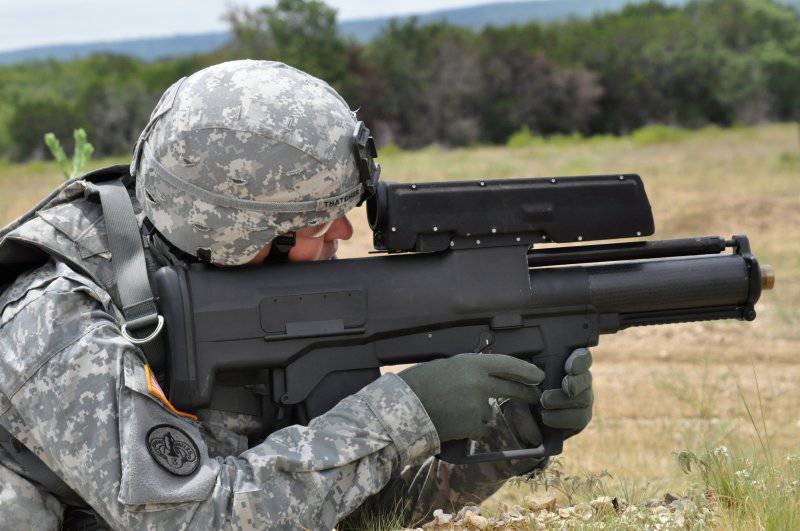 A Pentagon spokesman said that in the near future the XM25 grenade launcher would drop the letter “X”, which means that the product is experimental. In other words, the XM25 will go into the series, albeit initially in small batches - the first series will consist of 1100 grenade launchers and their ammunition. Currently, the US Army is working to introduce some improvements regarding the fire control system, battery life, weight and grenade size. Upon completion of this work, the US Army will receive weapons ready for widespread combat use.

The XM25 grenade launcher is a 5,5-kg semi-automatic four-shot grenade launcher equipped with a “smart” sight with a built-in thermal imager, ballistic computer and rangefinder. The sight allows you to detect the enemy at any time of the day and in any weather, determine the range to the target and program a 25 mm grenade to detonate in a specific place near the enemy, for example, above a trench, a hatch tank, in a window opening, etc. This allows you to reliably hit the target behind shelters that protect against conventional small arms fire. Based on several hundred episodes of the use of the XM25 in Afghanistan, the military concluded that the new weapon is much more effective than most portable support weapons. A shot from the XM25 usually stops the Taliban attack, and the grenade launcher provides high accuracy at a distance of up to 500 m, that is, further than the Kalashnikov assault rifle. 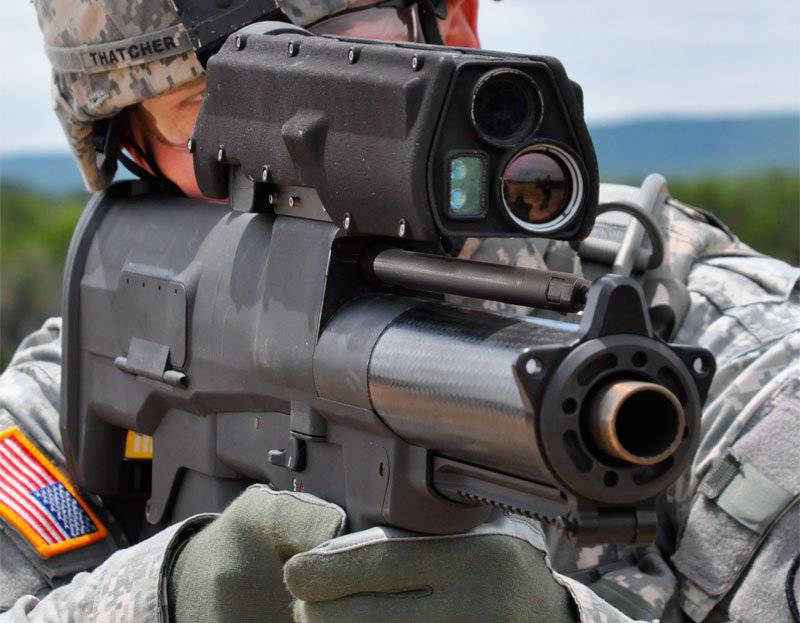 Guidance is as follows: the soldier first finds the target with the help of a perfect 4-multiple thermal imaging sighting system integrated into the weapon, then the laser range finder is turned on and information about the distance to the target appears in the eyepiece of the sight. The soldier needs to choose a point near the enemy's position: from the side, from above, from behind and press the trigger - the grenade will explode behind, above, below or on the side of the shelter. With the explosion of a grenade strikes a living force in a radius of 6 meters.

In one episode of XM25, a foot patrol member, Sergeant Carlos Smith, discovered the ambush with an XM25 sight. Usually, the Taliban hide behind rocks, hills, ruins, and other shelters that protect them from bullets. But in this case, the fighter was XM25, and the 25-mm grenade exploded directly above the enemy's machine gunner. As a result, the ambush was broken - the enemy fled, taking with him the wounded. In general, the use of "smart" grenade reduced the battle with conventional 15-20 minutes to 5-7. Thanks to XM25, the soldiers didn’t have to reach the enemy from the flanks - the XM25 grenades simply smoked the enemy out of the shelter, showering him with shrapnel. For its high fighting qualities, XM25 received the nickname Punisher ("Punisher"). Interestingly, most soldiers dream of getting such a weapon, despite the fact that sometimes, in addition to the already difficult XM25, you have to carry an automatic weapon. But on foot patrol, a soldier usually has only XM25 and a pistol - the fighters are confident that with the new weapons of the enemy it will be possible to destroy from a safe distance. 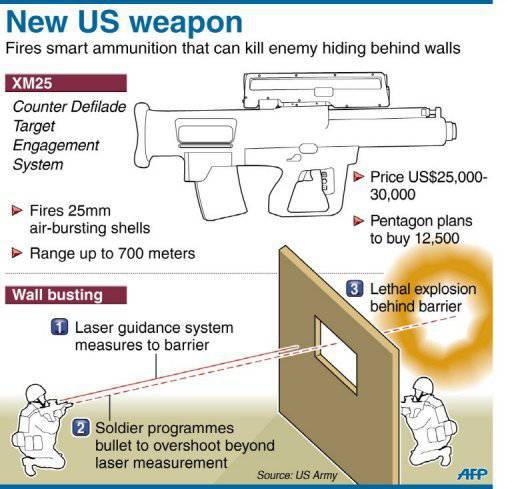 The wide distribution of the XM25, albeit in the ranks of the same army, is of great importance for the entire military science. For centuries, soldiers have honed their skills in using cover to protect against direct small arms fire. Now there is a weapon from which you cannot hide even behind a two-meter concrete wall. Until now, high-precision ammunition with programmable fuses has been the forefront of heavy artillery and aviation calibers, but with the advent of the XM25, individual infantrymen received similar highly effective weapons. 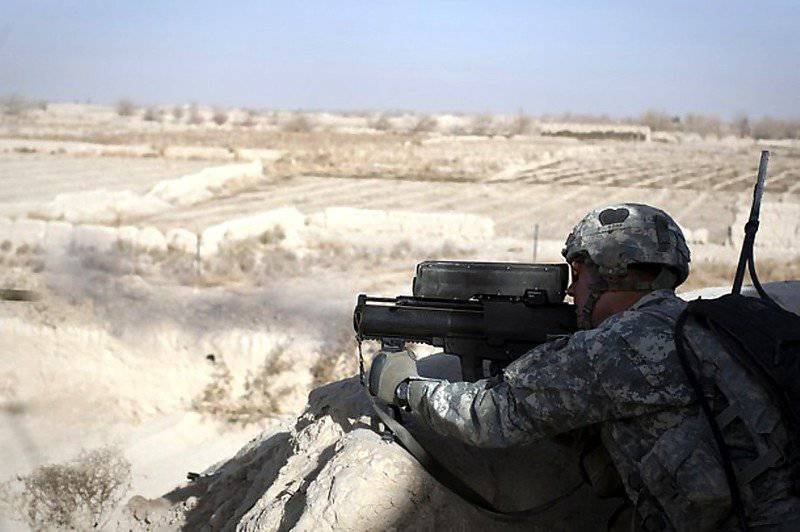 The first thousand XM25 is likely to go to the US Army already in 2014, and most of 2015 will be spent on large-scale tests of the new weapons, including in combat conditions. XM25 will be transferred to all combat brigades, as well as to units of special operations forces. The cost of one XM25 grenade will amount to $ 35 thousand, and one grenade with a programmable fuse will cost about $ 55.