Fateful meetings of the war years 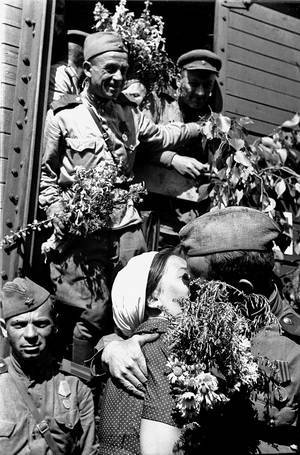 
I, then only a teenager, had the last conversation with my elder brother forever in memory before sending him to the front — already in Novosibirsk, where he managed to get out of Moscow only because his ministry was evacuated (GLAVK). Taking advantage of such an opportune moment, he was able to see his wife and daughter arriving earlier in our family, and most importantly, to try again to transfer to the army, which he succeeded when he applied for a volunteer membership in the emerging Siberian division.

Volunteer is my brother! And around so many neighbors who have not yet come to their senses from the stress of widespread repression! But even my aunt is an opponent of all violence and wars, realizing that the fascists are threatening Moscow, and then Japan, also said: then I will go to war myself!

My brother is the bravest, the strongest and, of course, the nicest! - and he, on the last night before his departure, confessed to me that he wanted to talk heart to heart with me. And around this night! And we are all alone - all our women have not yet returned from their next trip to the suburban villages to barter potatoes and, maybe, even bartered some vegetables. Such circumstances gave a special, very unusual flavor to our meeting.

What we just didn’t talk about: my studies in foreign languages, the importance of studying storiesabout music and poetry. I took the opportunity and told how once in the attic I found a leaflet with two poems in a wasted folder, a famous poet Nadson, who was unknown to me until then, who amazed me with his sincerity and sincerity - I would like to know more about him! My dear brother responded, and to my surprise, read to mind and even dictated several of his poems for writing, noting, however, that with age my sympathies will certainly change and may well lean, for example, towards Mayakovsky's work. As for my intention to seriously study philosophy, my brother warned me: I could not have done it, like one of his employees, who bought the whole K. Marx library and, without reading, stressed some pages with a pencil in order to demonstrate to their colleagues their painstaking study in party elite philosophical leader.

“In the meantime — here is my present for you!” - and he took out several volumes of L.N.Tolstoy from his soldier’s backpack. We also had time to talk about Lev Nikolayevich, about his philosophical views and the heroes of his works. So we sat until dawn and, already on the porch of our house, firmly hugging me in farewell, my brother said: “comprehend the essence of our meeting!” And I, looking excitedly at the volunteer walking with a fighting bearing, really felt this essence for the first time. And only then, almost every subsequent day, filled with nightmares of wartime, in my soul, like many of the heroes of the Tolstoyan novel War and Peace, began to look through something bright and kind, causing a natural disgust for everything bad. And the more evil in life, the sharper and brighter that feeling.

Here, by the way, I became acquainted with the story of Lev Nikolayevich about the marriage of Kitty and Levin, but not in some registry office, but in God's temple, with the full composition of the clergy during the life-prayer instruction of the newlyweds, pronounced, as Lev Nikolayevich emphasized, powerful bass protodeacon! After reading this episode more than once, I thought bitterly - I would see at least one priest - after all, all churches were closed for a long time. I decided to check, and the next day I walked around the not yet destroyed cathedral: even the entrance to the fence was blocked.

Has stood And so wanted to search more! Then I decided to go to the old abandoned city cemetery, and there - I knew there was a pretty wooden church. Well, I came to it - before the eyes of that very old church, but with the main entrance, roughly slapped with boards, and behind it - the cemetery. And suddenly, on one of the graves, I see a small burning lamp under the glass! I did not have time to wonder how an obviously worried elderly woman emerged from the surviving church lodge. Looking at my face, she apparently understood that I did not belong to the category of militant atheists, and unexpectedly for me, with a friendly smile, began to tell that there are people who secretly follow this "unquenchable" lamp on the grave of a local highly esteemed devotee. And if I'm interested, she is ready somehow, when the majority is busy at work, to open the emergency door so that I can be inside the temple, where both the altar and the iconostasis are whole. Here only services are prohibited, and there is no one to serve. The last abbot - the old father - disappeared in some northern camps. With these words in her gaze, I felt such sadness and, at the same time, such goodness, that I could not resist to stand on her knees before her. And yet - with all the reality I felt the kindness that I read about in the books donated by my brother!

Even after returning home, such a feeling persisted for a long time in my soul, and everything seemed to me - from that time I myself became somehow different, though not as kind as church devotees. I was immediately convinced of this by reading the note on my desk, where I was instructed by the doctor — another good friend — to be at an extremely important medical conference. Outrageous - I'm not a doctor! But, remembering the good, I decided to go anyway.

On the day of the conference, I was already sitting in the large hall of the Novosibirsk Medical Institute, trying to occupy the most imperceptible place in the last row ¬ I was extremely embarrassed by the presence of an alien audience, dressed in white gowns! But especially surprising was the appearance on the podium, instead of the usual leading organizer in such cases, a handsome grandfather also in a white robe, and most importantly, it was impressed with a black hat on his head, of a very original form, unlike even a headdress of foreign academicians. And the violation of the usual order of conferences, established almost at the level of the law, was no longer striking the audience’s attention, any creative tension of the audience sitting with open notebooks in their hands. My embarrassment before the white coats, and most importantly - the lack of knowledge of the medical terminology and the surgical process itself was an insurmountable obstacle, but it didn’t stop me from feeling something blessed in the professor’s report, close to the sad expression of the cemetery’s acquaintance and my farewell conversation with my brother. Isn't that the essence, bequeathed to them at parting, I was already thinking on the way home? And then the thought occurred to me - would it not be better to walk once more to the cemetery in order to tie everything together? And, despite the already quite late evening, I did. 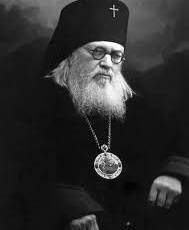 A strange phenomenon was waiting for me on the way to the church. In the evening twilight, one could guess the open door of the main entrance ajar, and nearby the boards were torn from it. The first thought about the god-fighters - what they started ?! Not without hesitation, I climbed onto the porch and tried to look inside - a solid darkness in the temple limits and only a faintly flickering light in front. Then I quietly slipped over the nearest wooden column and gasped: in front of the icons there were several old women with lighted self-made similarities of candles. One of them quietly began to read a prayer. Wow! Seeing such a miracle, I was embraced by some extraordinary inspiration — a tangible feeling of special grace, and I thought: indeed, with God's help, everything is possible! It happened to me in the inactive church, as in a dream, to see the praying old women - that’s to be the priest! And then it seemed to me that it was a dream: the Royal Doors opened and that professor, who spoke at the conference just a few hours ago, is coming out on the pulpit — without a medical gown, but in the present, albeit modest, priest's vestments! What happened in my soul, I did not understand - it seemed that a powerful choir sounded in the church with a bell ringing, along with the voice of the priest: "Glory to God in the Highest ... In human favor!"

Not quite having come to my senses, I felt how gently they were pulling at the sleeve — that was an elderly invalid, leaning on a thick wooden crutch. Pointing to his only leg, he said in a whisper: “Is it difficult for me, and you, a young man, could not, after the service, conduct our Vladyka to the third house on the main street?” This is the reality! Going to church is a crime; and if you walk down the street with the bishop? Most likely, he will take me as a dummy agent! How to be? And how my brother ¬ honest and noble, even in the rear, at least at the front!

At this very moment, the archbishop himself came out of the semi-darkness of the temple closing for the night and, with a friendly look, asked the disabled elder: “This young man?” I, as my father taught, in a standing position “cadetically”, took a step forward with a bow for pastoral blessings. Having asked for the name, Vladyka blessed me with a broad bishop gesture. Overcoming embarrassment, I, already on the porch, admitted how I wanted to see the priest. And here, to my surprise, in his face and gaze reflected the very good that so sunk into my soul when parting with my brother and when I met a woman at the cemetery church. Obviously, noticing my dismay, Vladyka, smiling and, as if in jest, introduced himself: “Archbishop Voyno-Yasenetsky!”

When we went out into the street, Vladyka started such a sincere conversation with me that later, after many years and until now, I perceive him as my first and most heartfelt confession. But not in the way the confessor says, but the spiritual guide only listens. The power of the Spirit of the Lord undoubtedly gave me a true knowledge of the essence that, going to the front, my brother was told to comprehend.

After all, it is absolutely clear: there are no phenomena in the world that are not caused by causality, but at the beginning of everything that a person does, there lies the Mind (ie, the Mind). Nobody saw the mind of man, but he is! The mind is judged by its deeds, and the warmth and cordiality in human relations testify to the soul, manifested in love of neighbor.

When parting, Vladyka blessed me once more and said that everything good that I was talking about would surely come true - and it happened! In mutual love, said Archbishop Voyno-Yasenetsky, a kind family will endure all life's burdens with God's help! Where there is love and devotion to family traditions, there is God!

Ctrl Enter
Noticed oshЫbku Highlight text and press. Ctrl + Enter
We are
Prelate and surgeon. Valentin Feliksovich Voyno-YasenetskyFather told
6 comments
Information
Dear reader, to leave comments on the publication, you must to register.