In a hot battle, experienced how much 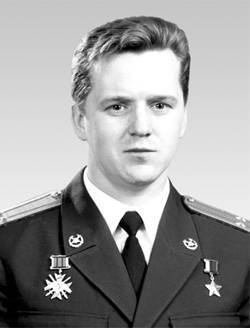 He is older than me by only two years. But talking to him, looking into his eyes, I realized that he was older than me for a lifetime. Until recently, we were unfamiliar. We grew up in different cities, but in one state. We read the same books, watched the same films. Yes, and we had one dream - serving the Fatherland. And today his hometown is considered abroad. And fate decreed us in its own way: I got the armchair work, he - the everyday routine in Tajikistan.


How many boys, looking at the heroes of the film “Officers” and repeating the catch phrase: “There is such a profession - to defend the Motherland”, they dreamed of officer uniform and military feats! The boy from the small town of Uralsk Oleg Khmelev was no exception. Having firmly decided to become a military man, Oleg understood that the road to a dream is long and difficult. He had no one to count on, and he learned to make decisions on his own, fostered the will, tempered his character. To become strong, began to engage in basketball and swimming. I got carried away with hand-to-hand fighting and, while still at school, I got a scrum of an instructor and began training in DOSAAF for conscripts.

Time flies. After graduating from eight classes, Oleg went to Sverdlovsk to enroll in the Suvorov School. Passed all the exams, but missed points. In the end - did not pass the competition.

Failure did not break Oleg, only forced to lend to study. Teachers and peers did not doubt that Khmelev would become an officer. Once he made a decision, it will be so. In the 1989 year, after graduation, Oleg became a cadet of the Omsk Higher All-Arms Command School.

In June ninety-third, Lieutenant Khmelev was sent to serve in the Trans-Baikal border district. He did not have time to arrive in Chita, as he was sent on a business trip for six months, to the Moscow border detachment. Despite the fact that Tajikistan has become a sovereign state, Russian frontier guards served at the outposts. And here the war was already in full swing.

At first, Oleg was appointed deputy chief of the backup outpost of the 1 commandant's office. Exactly six months later, in April ninety-fourth, Khmelev wrote a report on the extension of a business trip for another two years. He insisted on serving in an assault landing group.

The command satisfied the report of the young officer, appointing Oleg to the post of deputy chief of the airborne assault outpost. Fighters in DSHMG - the same paratroopers. Order - and in a few minutes the group in full gear is already in the helicopter. And so the whole trip: now at the point, then at the combing, now at the reinforcement, then accompanied ...

August Oleg Khmelev spent at the border post Turg together with the senior post lieutenant Vyacheslav Tokarev and twenty fighters. About six o'clock in the evening on August 18, about two hundred Tajik militants, Afghan Mujahideen and Arab mercenaries rushed to the high-rise located just above Turga. Having seized the checkpoint, the militants attacked all the power of fire on the defenders of the fast.

It is impossible to climb over the rocks in the evening in the mountains, you will not lift helicopters, so there was nowhere to wait for the help of the border guards. The situation became even more complicated when neighbors left the skyscraper - a detachment of the Tajik security service. From the positions they left soon too, shelling began.

There are at least two hundred militants, and there are only twenty defenders. A wave of attacks rolled one after another. The "spirits" order to take the height at any cost. Capture the Mujahideen Turg - and the whole valley is under their control.

Fatal wound was received by lieutenant Vyacheslav Tokarev. Oleg took command of the post by himself.

After a few hours of battle surrounded by border guards spent almost the entire ammunition. Nowhere to retreat. A "spirits" all the rod to a height, regardless of the losses. Oleg contacted the head of the detachment, Lieutenant Colonel Masiuk. Reported the situation, said that in this situation the only way out is to open fire on the post.

Grad rocket launchers, Gvozdika self-propelled howitzers hit the Turg in the valley Tanks, Infantry fighting vehicles, mortars. With the start of shelling of the immediate approaches to the position, Oleg sent personnel to cover, and himself, risking his life, began to adjust the fire. The fight lasted all night. Finally, the militants, having suffered huge losses, retreated to Afghanistan.

Thanks to the courage of Lieutenant Khmelev, the high moral and psychological training of the border guards, an important defense unit was retained at the site of the 12 frontier outpost, and indeed of the Moscow frontier detachment. During the battle, no soldiers died.

If the path cutting through his father's sword,
You are wound with salty tears,
If in a hot battle I experienced what, how much -
So, you read the necessary books as a child!

PS Currently, a graduate of the Academy of the Federal Border Guard Service of Russia captain Oleg Khmelev serves as the head of the border control department of the “Moscow” OOKPP.