The Russian army is a priority for Putin's third term ("ISN", Switzerland) 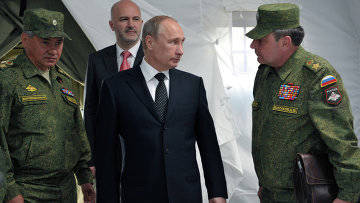 In July, Russia conducted the largest unscheduled military exercises since the collapse of the USSR. In the so-called readiness check in the Far East of the country, up to 160 thousands of soldiers participated. At the large-scale maneuvers in Sakhalin and in Transbaikalia were attended by the Supreme Commander - President Vladimir Putin. Unlike previous similar events (unexpected readiness checks have been constantly held in the Russian army since February of this year), the Far Eastern exercises received wide publicity, and the Russian government actively advertised them in the international arena. At the same time, the first information about the new budget for 2014-2016 years was published. Only national defense spending grows noticeably in it: over the next three years, they should increase by 63% and reach 2016 billion dollars in 105 year. This is 22% budget expenditure. According to polls that were published by 11 in July on the relatively independent from the Kremlin Levada Center, more and more Russians support the progressive militarization of the country. In the light of this popular approval, the modernization of the Russian army is becoming an indisputable priority of state policy.


Military exercises as training and propaganda

The readiness check of the Armed Forces of the Russian Federation, which took place in the Far East, became the largest unscheduled exercises for the whole history RF It involved the forces and resources of the Central and Eastern military districts (5 ground armies and one air army), the Pacific fleet and strategic and transport units aviationbased in the Central Military District (a total of 160 thousand soldiers, 5 thousand units of military equipment, 130 aircraft and helicopters and 70 warships and auxiliary vessels). Maneuvers were carried out at 17 test sites in both of the above districts, as well as in the Sea of ​​Japan and Okhotsk. To participate in them, soldiers were transferred by rail and by air at distances from 1000 to 3000 miles.

According to the Russian media, also addressed to an external audience, the readiness check was the culmination of the process of improving training in the Russian army this year. By the end of the maneuvers, it was announced that “all” 12 thousands of soldiers would participate in the Russian-Belarusian exercises “West” scheduled for September. On the territory of the entire Russian Federation, a series of surprise exercises (in particular, in recent days they have been held at the divisions of the Strategic Missile Forces and at the mountain-rifle brigades). Also, preparations are underway for large-scale exercises in the European part of Russia, which are traditionally announced annually. The peak of the exercise is expected in the second half of August and in September. It is not known yet how much the government intends to make these projects public and use them as a diplomatic weapon in relationships with neighbors.

Military spending is a key item in the Russian budget

Since 10 July, information on new budget forecasts for 2014-2016 has been published, although news about it while obscured by the above-mentioned teachings. Despite the general downward trend in spending against the background of a slowdown in economic growth, as well as the abolition of a small part of the appropriations previously allocated for the purchase of new weapons and military equipment for the period after 2016 and reaching 3 billions over three years, Russian military spending will continue grow as planned in previous years. The defense section of the federal budget, from which the Department of Defense receives approximately 90% of funds, is estimated at 78,7 billion dollars for 2014 year, 96,4 billion dollars for 2015 year and 105,2 billion dollars for 2016 year (converted to dollars at the current rate for 2013 year from taking into account fluctuations in the amount of the amount of 64-70 billions of dollars). For comparison, the costs of other “law enforcement agencies” (section “Maintenance of law and order and security”), which earlier grew at a similar pace, will increase by only 9% over the same period. In addition to military spending, it is planned to increase only funding for preparations for the Olympic Games 2014 of the year in Sochi and for the upcoming World Cup Football in 2018, as well as the costs of upgrading the railway infrastructure, which, as should be noted, are actively used by the military. Allocations for other purposes will be kept no higher than the current level.

According to Alexei Kudrin, who has held the post of finance minister for a long time and resigned in protest against the growth of military spending, defense is the only budget item that grows not only within the budget (the share of military spending in the budget, which is 15,7% for this year, should increase to 2016 year to 22%), but also as a percentage of GDP. Now they make up about 3% of GDP, but with the current pace maintained, they should reach about 2016% by 4 year. It should be noted that for at least a decade the growth of military expenditures was proportional to the growth of gross domestic product, and funds spent on defense fluctuated somewhere around 3% of GDP.

Public support for militarization is growing

It should be emphasized that the policy of building up military power enjoys clear support from the public. According to a survey conducted by Levada Center, 46% of respondents support the growth of military spending, even if it slows down the pace of economic growth. 41% of respondents opposed. The previous survey was conducted in 1998 year. Then 35% supported an increase in spending, but 53% did not. Russian society is also increasingly amenable to propaganda, which speaks of a growing military threat to Russia. The number of respondents who believe that external threats are more important than internal problems has increased to 23% (from 13% in 1998 year). 32% of respondents are also convinced that military power is more important for Russia than economic power (in 1998, 22% thought so). Probably, in the future, these trends will appear even more clearly and will cease only if the living standards in Russia drop significantly.

The unexpected checks of the combat readiness of the Russian army, carried out with the participation of President Putin, are a clear signal that demonstrates the significance that is now being attached to military matters. Visual demonstrations of the effectiveness of the armed forces should first of all be taken as an excuse for the continued increase in the cost of their modernization. Accordingly, it can be assumed that this military reform (ie, the modernization of the Armed Forces of the Russian Federation and the defense system) will continue to be carried out in its present form, despite a noticeable decrease in economic growth rates.

Military exercises presented by the media as a source of pride for the average Russian also serve as a way to shape public opinion. The attitude of Russian society, for which the army remains one of the most important elements of statehood and historical tradition (the armed forces are one of the few elements of the state structure that are respected and trusted by the people), contributes to the further militarization of Russia. Apparently, this trend will continue and be exploited regardless of the political forces in whose hands there will be power in Russia.