Total US espionage against Brazil. For what? 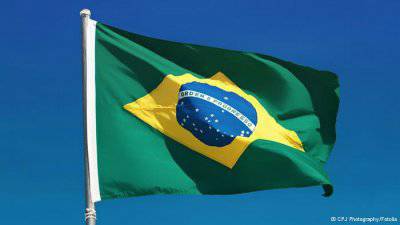 Dilma Rousseff’s first state visit to the United States will take place on October 23. Preparation for it was overshadowed by revelations made by Edward Snowden. It follows from them that it is Brazil that is the country in the Western Hemisphere in which the intelligence work of the US special services is conducted most actively. According to the data that leaked to the media, Americans are interested in everything - from the strategy of the development of the armed forces and the content of military-technical cooperation plans with China, Russia, India to the personal life of the political and military leadership of Brazil. Particular attention is paid to the collection of dirt on President Dilma Rousseff and her inner circle ...


In recent decades, Brazil has been viewed in Washington as the main regional rival, whose accelerated development in the field of modern technologies, energy, military industry, and cosmonautics through 20-25 years will lead to the consolidation of the overwhelming majority of Latin American countries around it. Washington’s proposed “Pan-American integration of ALCA” failed miserably at the Summit of the Americas in the Argentine city of Mar del Plata in 2005. Brazil, Argentina, Venezuela and other countries of the continent said “no” to Washington, and then took steps towards genuine Latin American integration. The leading role in this process belongs to Brazil, which, unlike the United States, has never been a “regional gendarme”.

If before the escape of Snowden, the visit to Brazil by Secretary of State John Kerry was planned mainly as an organizational one before the visit of Rousseff to Washington, now the topic of US espionage has become powerful in the agenda. Perturbation of Brazilians can be understood. On the one hand, Washington does not cease to repeat that Brazil is its main ally in Latin America, and on the other hand, it kidnaps its military secrets and copies the correspondence of the president, ministers of defense, foreign affairs and other responsible persons determining the most important decisions. For what? Just to know? Or for blackmail at the highest level in case of intractable difficulties in bilateral relations? In some countries in Africa, Asia, and Eastern Europe, this method was successful. Is Obama going to repeat the "success" in the Brazilian direction?

The foreign ministers of the MERCOSUR and 5 countries of August met with UN Secretary-General Ban Ki-moon to express their concern and outrage at the US actions to deploy a global espionage system. The representative of Venezuela, Elias Jaua, spoke on behalf of the ministers: “This practice is an absolute violation of international law, the sovereignty of countries, and neglects the basic rights of all citizens of the planet.” All regional organizations, including the Community of Latin America and the Caribbean (CELAC) and the Union of South American Nations (UNASUR), protested. The case is not limited to protests. Brazil and the leading Latin American countries intend in the next two to three years to create independent electronic communication channels, whose servers will not be located in the United States. Measures will be developed to protect these channels from hostile intrusions.

Some explanations were given about US espionage in Brazil from Washington, but Foreign Minister Antonio Patriot found them insufficient. In response, the State Department invited him and other Brazilian officials to come to the United States to familiarize themselves with the activities of the NSA on the ground and, it should be understood, to make sure that Brazil does not appear as an object for electronic espionage. Outwardly, this is a gesture of goodwill, in fact, an imitation of openness for propaganda purposes: “We did everything to reassure our allies in the countries south of the Rio Grande.” Vain hopes. "Calm allies" will not work. Snowden dealt a crushing blow to the two-faced policy of the United States in Latin America that Obama would have to deal with Latin American partners with a "black mark" hypocrite and deceiver before his term expired.

US Ambassador to Brazil Thomas Shannon ingloriously leaves his post. He positioned himself as a flexible, objective, sane, politician prone to constructive dialogue. It turned out, however, that Shannon does not stand out against the background of the “imperial generation” of US diplomats, whose nomination fell on the years of the presidency of George Bush Jr. and Barack Obama. You can declare, promise and guarantee anything, but to achieve their foreign policy goals, the United States will easily give up any statements they have made before. This habit of lies, acquired by the State Department over the last twenty years, and an outstanding desire not to use it as a matter of course, to act as a superpower, to which supposedly everything is allowed, harms and damages the diplomacy of the United States.

Thomas Shannon insistently drove wedges into Brazilian-Venezuelan relations, suggesting to Brazilians that the “populist ideology of Chavez” sooner or later destabilizes Brazil, which is more advantageous to have in the neighborhood a more moderate political regime. In fact, it was a call not to interfere with the puppet radical opposition, which was funded by the US intelligence services and has always been hostile to Brazil, to come to power in Venezuela. This anti-Venezuelan line of the US Embassy in Brazil is preserved, only now, instead of Hugo Chavez, President Nicolas Maduro is under attack.

On the BAEMundo portal, material was published on how Shannon, being Deputy Secretary of State in 2009, sent the head of the NSA Keith Alexander a letter classified as “secret”, in which he thanked him for his invaluable assistance in preparing for the Summit of the Americas, held in Trinidad and Tobago. The State Department received from the NSA more than a hundred documents received promptly from the presidential offices and foreign ministries of the countries of the continent. Shannon emphasized that “the NSA documents allowed us to get a deep insight into the plans and intentions of other forum participants and ensured that our diplomats were well prepared to provide expert assistance to President Barack Obama and Secretary of State Hilary Clinton.” These materials helped to chart a course of conduct on such a difficult issue for Washington as Cuba’s participation in the summits of the Americas. A strategy was worked out for such complex opponents as Hugo Chavez. In fact, it was a strategy of "pre-emptive promises"! As a result, Obama has shown himself to be a leader, ready for a dialogue with Latin America, “building productive and positive relations” with US neighbors in the Western Hemisphere. “Our rivals in the region,” Shannon noted with satisfaction in a letter to the head of the NSA, “were ready to discredit and shame us. We succeeded, our rivals failed. ”

Recently it became known that Liliana Ayalde was appointed as the new US ambassador to Brazil, with almost 30 years working in the international field. A specific bias in her career is seen without effort: a close relationship with USAID in the Latin American and Caribbean direction. This organization works in direct contact with the CIA, RUMO and other US intelligence services, traditionally providing them with a "roof" for conducting operations. As USAID's responsible operator, Ialde "lit up" in Nicaragua and other Central American countries, and she was involved in the implementation of the Plan Colombia, whose most important task was to exert military strategic pressure on Venezuela and Brazil. From 2008 to 2011, Ayald was the US ambassador to Paraguay and made a significant contribution to the removal of President Lugo from power. For the last two years, she was acquired by the State Department as a curator of the countries of Central America and the Caribbean, including Cuba. There is no doubt that his hostile attitude towards the government of Raul Castro Ayald will insistently introduce the Brazilian leadership, given that Dilma Rousseff, like her predecessor Inacio Lula da Silva, considers Cuba as a key ally in the Caribbean.

Todd Chapman, who recently returned from a trip to Afghanistan, where he provided “coordination of development and economics” will be the second number in the embassy team and “doubler” of Ayald for the next two years. In addition to the elite Duke University, the list of educational institutions Todd graduated from is the College of Military Intelligence at the Department of Defense. If he was engaged in economics, then on topics of interest for exploration: energy, hydrocarbons, international finance, trade. In 2004-2006 Todd served Bolivia, in 2007-2010. was the charge d'affaires in Mozambique. There were other uses, often with elements of improvisation. Chapman was almost always sent to difficult job sites, so he ended up in Brazil.

In the staff of the US Embassy and Consulate in Brazil there are dozens of intelligence officers. In the embassy building one of the servers of the NSA's total surveillance system is functioning. It is used to intercept communication channels of the presidential staff, ministries, Brazilian security agencies, and parliament. No matter what promises made by John Kerry during his stay in Brasilia following the “spy scandal”, nothing will change on the front lines of the secret war of the US special services. The invisible army of total espionage will continue to operate.

Ctrl Enter
Noticed oshЫbku Highlight text and press. Ctrl + Enter
We are
Brazil: elections under pressure from the CIAMilitary reform as an integral part of the security concept of the Russian Federation: Systematic dynamic assessment
Military Reviewin Yandex News
Military Reviewin Google News
12 comments
Information
Dear reader, to leave comments on the publication, you must to register.