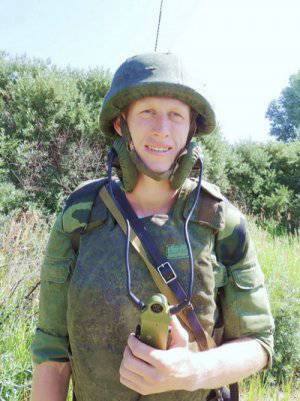 He is laconic and refers to the type of people who are easier to take and do than tell. In which, for whatever they take, everything goes well and it turns out as if by itself, as if they know a certain universal secret of success. As if confirming this assumption, the question of what helps him and his subordinates to achieve high results in combat training and rallying of the team, Guards Senior Lieutenant Anton Orlov, the commander of a separate anti-tank platoon of the air assault battalion, replies:

By all the main indicators, the platoon headed by Orlov is the best in the military school. The team is small, because of the specifics of the tasks performed, standing a little apart from the others, the turnover of personnel is frequent (for the whole platoon there are three contract servicemen) - what kind of cohesion would it seem like in such conditions? But it is precisely its solidarity, friendship, and high team spirit (we borrow this term from the athletes) and this platoon is famous.

Is there a tent camp at the test site, is the parachute laying at the airborne training sessions, does the ATGM system need to be moved (and it weighs over twenty kilograms) - all Orlov's subordinates do together, together. The one who made himself, hurries to the aid of his friend. In the sports competitions of the brigade, the anti-tank platoon does not have a prize-winning place, be it volleyball or overcoming a single obstacle course. The New Year's table is again one of the best in the mix: snow-white tablecloths, a Christmas tree with its own decorations, for the “dessert” there are funny scenes from life. If someone from colleagues has a birthday, a small gift is attached to the general greeting.
This is what is on the surface. What is behind the scenes?

A graduate of the Far Eastern Higher Military Command School named after Marshal of the Soviet Union K.K. Rokossovsky (VUNTs of the Ground Forces “Combined Arms Academy”) guard senior lieutenant Anton Orlov took over command of an anti-tank platoon last September. He began with a radical renewal of the educational material base. And yet - seriously worried about the life of his subordinates. Shortly after the arrival of the new squadron, for example, they had a wardrobe and personal bags for personal items. It seems to be a trifle, but from such trifles, the mood of people in the service ultimately develops.

This is the first point of the "Orlov system" - care for subordinates.

- There is a golden rule: people should be treated as you want their attitude to yourself, says Anton. - Last year, one of the sailors who had left the reserve asked to help him with the paperwork for admission to the institute, - well, his documents came to the admissions office first. Always let subordinates at the checkpoint when they come to their parents. The squad leader of the junior sergeant Alchinova has a wife and a small child, and as necessary I give him a day off. People need to be treated with understanding and respect. How will the commander take care of his subordinates, delve into their needs, such is the situation in his unit. And still the commander should possess qualities of the leader and be an example for subordinates.

No matter how trite it may sound, a personal example is another key point of the Orlov system.

“A conscientious, demanding, enterprising officer who always and in everything leads his subordinates, be it the fulfillment of a combat training task or a sporting competition,” says deputy commander of the security team for work with personnel of the guard, Captain Alexander Kuvshinov, speaking about Orlov.

He mentioned the sport of the zakombat for a reason: the anti-tank platoon is a multiple winner of various competitions, in which the senior lieutenant Anton Orlov, the candidate for the master of sports in orienteering, takes guardians along with his subordinates. Not long ago, two-thirds of the unit’s physical training unit had the first grade. After the warriors who had served the prescribed period of time were transferred to the reserve, the statistics slightly deteriorated, but, it must be assumed, this is not for long.

Here we come to another important point of the “Orlov system”: who does not remember the well-known Suvorov dictum: “Every soldier must know his own maneuver”?

- Only one nuance: in relation to the marines - not a soldier, but a sailor, - smiles the officer. - My personal experience shows that every soldier must not only be within the strict statutory framework, but also constantly be busy with useful work. At the same time, clearly know your task and conscientiously perform it. If we add to this the appropriate control, there will be no ground for violations. A very important role is played here by the squad leaders. When I was on vacation, they fully provided service and life of a platoon. One was responsible for the appearance of the sailors and the internal order, the other - for maintaining documentation, the third - for the educational material base. 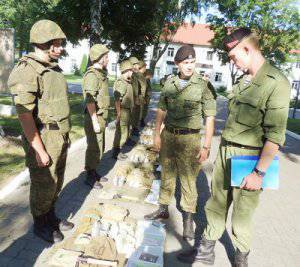 To date, only one commander of the anti-tank platoon unit serves on a permanent basis - the junior sergeant of the contract service, Nikolai Alchinov. The other two are coming and going "conscripts." The platoon commander is very much counting on the fact that in the near future all the squad leaders will become contract servicemen. In the meantime, people sign the contract reluctantly: service in the marines is difficult, stressful, and it cannot be said that all this is adequately compensated financially, an acute problem with official housing ...

“The squad leader is fully responsible for his personnel — this is his main job,” says Nikolay. - A young replenishment has arrived - you need to tell and explain everything clearly. If a subordinate has something wrong, and this is always noticeable, you should speak frankly, find out what's the matter, give good advice, watch. The main thing is that he should not do anything stupid at this time. If necessary, send a conversation with a psychologist with whom we have close contact.

There must be a good understanding between the squad leaders themselves. Before any event we have decided to discuss what and how best to do to come to a common denominator. Difficulties most often occur with military personnel who retire to the reserve. And here the main argument is a personal example. I always tell them that I’m the same as they are, I’m no less tired of them, but the cause shouldn’t suffer from this. It all starts with little things. A person irresponsible in trifles, in everyday life, will be irresponsible and in large. And the basis of everything is discipline. Without it, there will be no order, there will be nothing ...

Someone, I fully admit, the above “Orlov system” doesn’t seem like God’s message to the original: it’s been known for a long time! That is so, but it works and gives very specific results! And is it necessary to reinvent the wheel every time, if this has already been done for a long time? Isn't it better to just learn how to ride it well?

In conclusion I want to inform you: now the candidacy of the guard, Senior Lieutenant Orlov, is being considered for his appointment to a higher position - commander of the assault landing company. We wish good luck to Anton!

Ctrl Enter
Noticed oshЫbku Highlight text and press. Ctrl + Enter
We are
What you didn't want to know about EnglandResponsible for everything combat
Military Reviewin Yandex News
Military Reviewin Google News
13 comments
Information
Dear reader, to leave comments on the publication, you must to register.