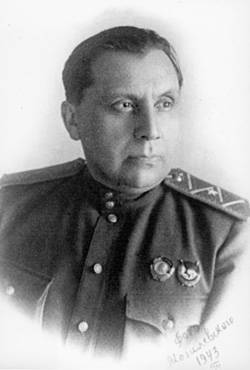 Most of the information about the activities of this person is kept secret so far. His collections of surnames, code names, operational pseudonyms, and illegal covers would be envied by any intelligence officer or spy. More than once he exposed his life to danger on the fronts, in battles with saboteurs and spies. But he survived, miraculously, having passed through repression, endless battles, purges and arrests, and 12 years of imprisonment. More than anything, he despised cowardice and betrayal of the oath and his homeland.


6 December 1899 was born in the city of Mogilev, Naum Isaakovich Eitingon. Naum spent his childhood in the provincial town of Shklov. After graduating from school, he entered the Mogilev Commercial School, but he failed to graduate. A revolution occurred in the country; in 1917, the young Eitingon took an active part in the work of the Social Revolutionary Party for some time.

But the romance of terror of Eitingon did not enthrall him, and after October 1917, he left the party of the Social Revolutionaries and got a job serving in the local Council in the pension section for families of those killed in the war. Before 1920, he manages to change several jobs, participate in the defense of the city of Gomel from the White Guards, and join the RCP (b).

Eitingon's KGB activity begins in the 1920 year, as authorized by the Gomel fortified area, and from 1921 by the military ombudsman of the special department of the Gomel GubChK. During these years he participated in the liquidation of the Savinkovka terrorist groups in the Gomel region (the Mole agent business). In the fall of the 1921 goal, in a battle with saboteurs, he was seriously wounded, the memory of this injury will remain with Naum for the rest of his life (Eitingon limped slightly).

After the end of the civil war, in the summer of 1922, he participated in the liquidation of gangs of nationalists in Bashkiria. After successfully completing this mission, in 1923, Eitingon was recalled to Moscow, the Lubyanka.

Until the middle of 1925, he worked at the head office of the OGPU as an assistant to the head of the department, under the leadership of the famous Jan Hristoforovich Peters. Eitingon combines his work with studies at the Military Academy of the General Staff, at the Eastern Faculty, after which he is transferred to the OGPU Foreign Institute (foreign department). From now on, the whole future life of Naum Isaakovich will be connected with Soviet intelligence.

In the fall of 1925 of the year under the "deep" cover, he goes to China to do his first back-to-back reconnaissance mission.

The details of those operations in China are little known and classified to this day. In China, Eitingon hones the skill of a scout, gradually becoming a good analyst and developer of complex multi-path, operational combinations. Until spring 1929, he works in Shanghai, Beijing, resident in Harbin. His agents penetrate the local authorities, the circles of the White Guard emigration and the residency of foreign intelligence services. Here he meets the legendary intelligence officers: German Richard Sorge, Bulgarian Ivan Vinarov, Grigory Salnin from the Republic of Uzbekistan, who for many years became his friends and comrades in combat work. In the spring of 1929, after the Chinese police raided the Soviet consulate in Harbin, Eitingon was recalled to Moscow.

Soon he finds himself in Turkey under the legal roof of a diplomatic worker, here he replaces Jacob Blumkin, who was recalled to Moscow after contact with Trotsky. Here he works for a short time, and after the restoration of residency in Greece, he again finds himself in Moscow.

In Moscow, Eitingon worked for a short time as Deputy Chief of the Special Group of Yakov Serebryansky (Uncle Yasha's group), then for two years as a resident in France and Belgium and for three years headed all the illegal intelligence services of the OGPU.

Period from 1933 to 1935 when Eitingon led illegal intelligence, is the most mysterious period of his service. According to reports, in this period of time he managed to visit several missions in China, Iran, the United States and Germany. After the transformation of the OGPU into the NKVD and the change of leadership, a number of new tasks were acquired before reconnaissance to obtain scientific, technical and economic information, but it was not possible to start solving new tasks right away, the war in Spain began.

In Spain, he was known as Major GB L. I. Kotov, deputy adviser to the republican government. Under his command, the future Heroes of the Soviet Union Rabtsevich, Vaupshasov, Prokopyuk, Maurice Cohen fought. The head of the NKVD residency in Spain at that time was A. Orlov, he also led all operations to eliminate the leaders of the Spanish Trotskyists and was the main security adviser of the Spanish Republicans.

In July, 1938, Orlov fled to France, taking with him the cash register of the residency, Eitingon was approved as the main resident, by that moment in the war a turning point had come. In the autumn, the Franco-sponsored troops of the German Legion Condor occupied the Republican stronghold of Barcelona. It is noteworthy that, along with the Franco, one of the first in the captured Barcelona gets the war correspondent of the Times Harold Philby. He is the Legendary Kim Philby a member of the "Cambridge Five", whom Eitingon in August 1938 of the year, after Orlov's treacherous flight, took to communication through Guy Burgess.

In addition to preserving the “Cambridge Five”, Eitingon in Spain also managed to gain good experience in guiding the partisan movement, organizing reconnaissance and sabotage groups, which was useful to him only two years later, in the fight against German fascism. Some of the participants of the war in Spain, the members of the international brigades will subsequently take a direct part in the operations of the Soviet intelligence. For example, David Alfaro Siqueiros, a Mexican painter, will take part in an operation against Trotsky in 1940. Many interbrigadovtsy will form the backbone of the legendary special forces of OMSBON, under the leadership of General P Sudoplatov. This is also Etingon's Spanish merit.

OMSBON (separate motorized rifle special purpose brigade) was formed in the first days of the war with Nazi Germany. In 1942, the formation became part of the 4 control of the Commissariat. From the first to the last day of the war, General P. Sudoplatov supervised this special service, and Eitingon was his deputy.

Of all the Soviet intelligence officers, only Eitingon and Sudoplatov were awarded the Order of Suvorov, which was awarded to commanders for military leadership. The operations “Monastery” and “Berezino”, developed and successfully carried out by them, were included in the military intelligence textbooks and became its classics.

The experience acquired during the war was used by Soviet intelligence and for many years of the Cold War. Back in 1942, while in Turkey, Etingon organized a wide agent network there, which was actively used after the war to penetrate military organizations in Palestine. Data obtained by Aitingon in 1943, when he was on a business trip in northwestern China, helped Moscow and Beijing to neutralize the sabotage groups operating in this strategically important region of China under the leadership of British intelligence.

Until October 1951, Eitingon worked as Deputy Sudoplatov, head of the sabotage and intelligence service of the MGB (from 1950, the Bureau on sabotage work abroad). In addition to this work, he also supervised the conduct of anti-terrorist operations in the USSR. October 28 1951, returning from Lithuania, where he participated in the liquidation of gangs of forest brothers, General Eitingon was arrested on charges of "conspiracy MGB." 20 March 1953, after Stalin’s death, he was released, and four months later, on August 21, he was arrested again, this time in the case of Beria.

For long 11 years, Eitingon turned from a "Stalinist intelligence officer" into a "Khrushchev political prisoner." Freedom Naum Eitingon released 20 March1964 of the year. In prison, he suffered a serious operation, the doctors managed to save him. Before the operation, he wrote a personal letter to Khrushchev, in which he briefly described his life, years of service and years spent in prison. In his message to Khrushchev, he noted that while in prison he had lost his health and his last strength, although he could have worked all this time and brought benefits to the country. He asked Khrushchev the question: “What did they condemn me for?” In conclusion of his letter, he called on the party leader to release Pavel Sudoplatov, who was sentenced to 15 years, saying: “Long live communism! Farewell!".

After his release, Eitingon worked as an editor and translator for International Relations. The famous scout died in 1981, and only ten years after his death, in 1991, he was fully rehabilitated, posthumously.

Ctrl Enter
Noticed oshЫbku Highlight text and press. Ctrl + Enter
We are
With the assistance of Wargaming, 15 tanks were restored from the collection of the Central Museum of the Armed Forces of the Russian FederationReports from the militia of New Russia for 4-5 of October 2014 of the year
Military Reviewin Yandex News
Military Reviewin Google News
9 comments
Information
Dear reader, to leave comments on the publication, you must to register.