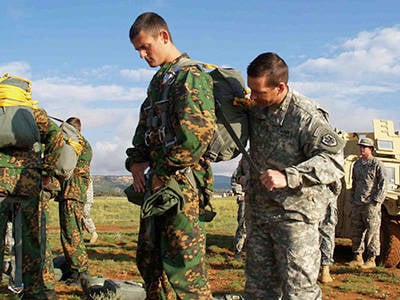 From 5 to 9 in August, a joint Russian-American conference on bilateral antiterrorist exercises was held on the basis of the 76 Guards Airborne Assault Division (Pskov).


The main objective of the conference is to clarify the preliminary deadlines and the plan for conducting a joint exercise, agreeing on the issues of material and technical support, the number of participants from each of the parties, and reconnoitring the areas where the exercises are held.

Within the framework of the conference, the American delegation visited Russian paratroopers in fire and airborne training, familiarized themselves with simulators and equipment of the airborne complex and airborne assault strip, and visited a military shooting range and training ground.

The first bilateral Russian-American anti-terrorism exercises were held in May last year on the territory of a military base of US forces at Fort Carson near the city of Colorado Springs (USA, pcs. Colorado). The Russian side was represented by military personnel of the 45 Special Guard Regiment of the Special Forces of the Airborne Forces.

Ctrl Enter
Noticed oshЫbku Highlight text and press. Ctrl + Enter
We are
Antiterrorist studies in TurkmenistanThe results of the second stage of the joint antiterrorist exercise of the Ala-Too-Anti-Terror-2013 divisions of the CIS states
39 comments
Information
Dear reader, to leave comments on the publication, you must to register.