Israel: double standards or other interests? 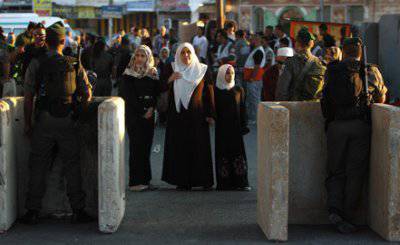 On the night of August 14, twenty-six people who had previously been in Israeli prisons returned to Palestinian land. These people were pardoned to convince the world community that the Jewish state wants peace talks. The release of prisoners sentenced to 1993 for murder or aiding in the murder of Israelis and those who are called "collaborators" in Palestine, Tel Aviv calls a "goodwill gesture." Fourteen amnestied Palestinians went to the Gaza Strip, twelve - to the West Bank. Countrymen made a grand reception for them - with greetings, hugs, songs and fireworks and shots. Mahmoud Abbas in Ramallah promised to secure the release of those who are still languishing in prison in the dungeon. Earlier, Israel promised to release 104 prisoners - of course, with an eye to the course of the peace talks. But it’s necessary to look around for Israel: after all, when giving such promises, the Jewish state started building almost a thousand houses in East Jerusalem.


"BBC" indicates that released Palestinians have served almost the entire term. The decision to release was made following a meeting chaired by Israeli Defense Minister Moshe Ya'alon. The adopted statement noted that "if someone from the liberated returns to hostile activities towards Israel, he will be returned to prison to serve the remaining term."

In Jerusalem, at the walls of the Israeli Supreme Court, a group of relatives of the victims of the liberated staged a protest. “These are not political prisoners, they are terrorists and murderers who will return home and be greeted like heroes,” said Gil Molcho. Her brother Ian Feinberg militants killed in Gaza in 1993 year.

104 Palestinians who are imprisoned for serious crimes committed before the 1993 year should be released. They will be released in four stages within a few months.

Simultaneously with the release of the first batch of prisoners, large-scale Israeli construction began on the west bank of the Jordan River.

According to "Lenta.ru" With reference to France Press, the Israeli government approved the construction of 942 homes for Jewish settlers in East Jerusalem. The statement was made on August 13 - on the eve of the resumption of the Palestinian-Israeli talks. The houses will be built on the territory of the existing Jewish settlement of Gilo.

Palestinian spokesman Yasir Abed Rabbo called settlement expansion unprecedented, and also said that such steps could lead to the collapse of the negotiation process.

The construction of settlements put the negotiations at risk. However, the first round of negotiations took place.

15 August "BBC" conveyed that the Israeli and Palestinian delegations held the first in three years round of direct peace talks, which lasted about five hours in Jerusalem. Diplomats called the negotiations serious. Details unknown. According to the correspondent of "BBC", on any breakthroughs so far can not count. It is noted that the ongoing construction of housing in the West Bank and in the eastern part of Jerusalem puts at risk a possible agreement. The previous phase of the negotiations - in September 2010 of the year - was suspended precisely because of this problem.

The BBC quotes Moshe Ya'alon’s pessimistic statement as published in the Jerusalem Post: “We have been trying to make a shift for 20 years since Oslo, not to mention 120 stories conflict. The skepticism of the tone of my statements is obvious, but we still decided to try again. ”

The Palestinian delegation at the talks is led by Saib Erekat and Mohammed Shtayeh. The Israeli delegation is headed by Justice Minister Tzipi Livni and Assistant Prime Minister Yitzhak Molho. US special envoy to the Middle East, Martin Indyk, and his deputy, Frank Lowenstein, are authorized to represent the White House at the talks.

Earlier, US Secretary of State John Kerry said that the negotiations will take nine months.

The Palestinians want the land seized by Israel in 1967 to be part of their territorial entity. Today, about half a million Israelis live on these lands.

Giriam Levy, a columnist for the Ha'aretz newspaper, notes that Israel does not yet intend to begin negotiations seriously. The Netanyahu government agrees to negotiate under pressure from Washington. And such actions "have to be balanced by the construction of new settlements, which is a highly destructive policy." Negotiations themselves are needed "in order to please the Americans and the world community." Giriam Levy notes that Israel does not have the heart to say no to John Kerry. The meeting between Israelis and Palestinians, according to Levy, is “another opportunity to talk and not reach an agreement.” If "a basic strategic decision is not made to end the Israeli occupation, and such a decision is not made, everything else is just a pretense and a waste of time."

“The only way out of this impasse is strong pressure from the United States on Israel. This could have a real result, since Israel is extremely dependent on the United States. But something doesn’t seem that the US administration and even Obama would want it. And without American pressure, a cart will not budge. ”

Greta Duisenberg, chairman of the Dutch Foundation "Stop Occupation," believes that Israel is currently engaged in "overt ethnic cleansing." According to her, the new round of negotiations will not be crowned with success: after all, new construction requires the destruction of Palestinian villages, the expulsion of more than 40000 Palestinians and the confiscation of more than 800000 dirhams of land.

The expert calls all this “blatant ethnic cleansing”.

Peace talks Greta Duisenberg relates to the fact that the European Union decided to exclude Israel from the Bank for International Settlements - precisely for politics in the occupied Palestinian territories. That Israel and restores reputation through the so-called peace process. In fact, the expert says, this is “a step towards strengthening the Israeli occupation.”

As for what has been said about the European Union, indeed, on August 14, the first round of negotiations between the representatives of Israel and the EU ended. It was about the participation of the Jewish state in the European program "Horizon-2020". Reports about it 9tv.co.il with reference to the Voice of Israel.

During the first round of Israeli-European negotiations, cooperation in the framework of the Horizon-2020 project was discussed. The topic of the boycott of Israeli organizations was not discussed, but it is on the agenda of the next round of talks scheduled for September.

In the case of participation in Horizon-2020, Israel will have to invest 600 million euros in it within seven years. Expected profit is from 30 to 60%.

Returning to the negotiations between Israel and Palestine, one more opinion should be given that sheds light on US activity.

Natasha Brain ("Voice of America") quotes Aaron David Miller, vice president of the Woodrow Wilson Center and a former negotiator. This person believes that the tension associated with the issue of settlements is not an ideal start for negotiations, but it is unlikely that they will fail for this reason.

Miller said: “We do not know what Kerry told the Palestinian and Israeli leaders. Did he hear from them something that could be “converted” into a real agreement? Because if we are talking simply about Kerry’s belief that the Palestinian-Israeli conflict is an important topic, and if you force representatives of the parties to sit in one room, there will be some kind of magical solution - this is a miscalculation on his part. ”

However, Mr. Miller finds that the United States cannot do without mediation: “In 50 years, only one agreement between Israel and the Arabs was concluded independently. It is necessary to remember which leaders we are talking about. Abbas and Netanyahu are not Anwar Sadat and Menachem Begin: they will need substantial help. ”

As for the Palestinian side, the way correspondent ITAR-TASS Vladimir Kostyrev, Palestinian Ambassador to Moscow Faed Mustafa said that Israel has taken a number of steps to prevent the negotiation process.

“We would very much like this round to be successful,” he said. “However, I think everyone understands that some of the steps that Israel has taken recently have been taken to thwart the talks.”

These steps include a statement on the construction of new settlements, the diplomat said. “Therefore, we are very cautious about what Israel is doing,” he added, pointing out a positive moment — the release of hostages from Israeli prisons.

So, it is unlikely that the current negotiations, no matter how long they continue, will be crowned with what can be called “success” with at least a large degree of conditionality. It seems that Tel Aviv doesn’t know how to say no to Washington, and it’s as if Washington doesn’t see the ongoing large-scale construction in the occupied lands. The twenty-six released prisoners, already almost completely serving time, are a mere formality. The real interest in the newest stage of the negotiating history of Israel and Palestine can be considered the European interests of Tel Aviv (which is understood in the United States). The round of negotiations between the representatives of Israel and the EU on the participation of the Jewish state in the “Horizon-2020” program is a good proof of this. No one will be surprised if the issue of a boycott of Israeli organizations in EU projects will be resolved already in September, at the next Euro-negotiation round.

Observed and commented on Oleg Chuvakin
- especially for topwar.ru
Ctrl Enter
Noticed oshЫbku Highlight text and press. Ctrl + Enter
We are
"Trouble" of the Promised Land. African immigration to Israel"Israel is a big pain in America’s ass"
Military Reviewin Yandex News
Military Reviewin Google News
63 comments
Information
Dear reader, to leave comments on the publication, you must sign in.