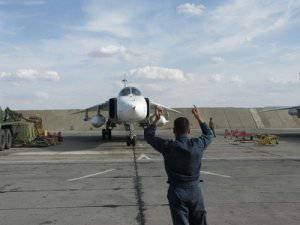 Quite a few in the Southern Military District aviation squadrons. But this one is special, because the aviation unit of Lieutenant Colonel Igor Kukartsev is reconnaissance. There are very few of these in our Air Force. Therefore, there are not so many pilots performing aerial reconnaissance in every military district. This means that each of them must be a highly qualified specialist.


- So in Soviet times he was. In the reconnaissance aviation squadrons, well-trained pilots flew. And then came the difficult times for the Russian Air Force - only a few units rose into the sky. For comparison: if today four flight shifts are held weekly, a few years ago the same number was counted during the month. Then the pilots didn’t just fly a little — catastrophically little. To maintain the combat readiness of subunits, only a select few of the “chosen ones” rose to the sky. If in other types and kinds of troops, the forced downtime does not particularly affect the professional level of training, then in the Air Force this is fraught with several months of recovery, additional time and material costs, ”Xnumx pilot of the X-th class Major Sergey Fil tells the Red Star correspondent. - Fortunately, now the situation has changed drastically.

Sergey is not talking about combat work reluctantly - but with restraint. They say that the mountains of the Caucasus have always been insidious. Both Chechen campaigns are proof of that (not all crews then returned from combat missions). August of 2008 was no less vile. Already on 8, the group of aviators relocated from the Volgograd Region to an operational airfield, closer to South Ossetia. And on the same day, the combat work began. Crews Su-24MR more than once had to lift their cars into the sky: it was necessary not only to monitor the actions of the enemy from above, but also to open the Georgian air defense system. The pilots understood that they were mortally at risk, that this time they were confronted by nothing more than armed militants, but by a well-trained, well-armed and trained regular army. Previously gained experience, of course, was not superfluous. Nevertheless, the actions in that operation were difficult to compare with the already familiar work in the North Caucasus. The strain was tremendous. How to be a target for armed rifle weapons extremists, Sergey knew before. Now his experience has been enriched with new professional impressions - what it means to be in the “capture” of the radar station of Georgian air defense systems. Both the crew of Major Fily and other military personnel of the air division successfully coped with the tasks by returning home alive.

- What aces will teach you, such as Major Fil, you will not find in any instruction or guidance document. Therefore, we are trying to take from them the most valuable thing - practical experience of acting in non-standard situations, ”says captain Sergey Anikin, a senior pilot of the airforce, who only recently received the qualification“ 1-class pilot ”. Sergey is one of those captains who graduated from military schools in 2000. He waited for long 8 years, when he could finally call himself a real pilot. What is it like - to go through 8 years of training according to the "export program" - literary and not express. With the right scenario for 2008, Anikin should have become an experienced combat pilot. And he was just starting to “get up on the wing.” In fact, Sergey was equalized with young officers who were lucky to come from universities when Russian military aircraft began to fly intensively, fulfilling the planned tasks of combat training. For example, during the Kavkaz-2012 SKSHU, where practically all the pilots of their air squadron deployed at the Marinovka airfield were involved in performing the tasks. Today, servicemen of the reconnaissance air unit participate in combat training activities jointly with air defense and other forces and equipment. Especially valuable in this is that the work is carried out by the group in close order, with the creation of interference, with a serious "opposition" from the ground. Increasingly, the tasks are connected with the “rehearsal” of the future provision of the Sochi Olympics.

Today, there is no such thing that the young lieutenants who come to the units immediately write reports of dismissal. A few years ago it was commonplace. As for school preparation, it is different for everyone. Those cadets who happened to fly the Su-25 are better prepared than their “colleagues” who got acquainted with the sky on the L-39 planes. One feels that Lieutenant Andrei Netsvetaev, who was practicing “drying” at the school, is flying easier. Trying to keep up with a colleague and other pilots. Officers constantly improve their skills. Young people today do not cause serious concern to the command. Squadron commander Lieutenant Colonel Igor Kukartseva has a soul that hurts about something else. He, for example, listens sadly to reports that the plans include serious repairs of military airfields. Their runway has long been in need of major repairs, because every year several aircraft engines fail because of the poor quality of the runway. To understand: the repair of one “engine” Su-24MR costs the military department in 9 more than a million rubles. Perhaps, it is much more effective not to patch the band from time to time, expecting another shift from each shift every time, but to do it right away on the conscience?

Lieutenant Colonel Igor Kukartsev is sure that all tasks need to be solved in a complex. So the objective difficulties facing him and his subordinates need to be assessed together and solved them consistently.

Ctrl Enter
Noticed a mistake Highlight text and press. Ctrl + Enter
We are
About Stalin and KhrushchevMilitary reform as an integral part of the security concept of the Russian Federation: Systematic dynamic assessment
23 comments
Information
Dear reader, to leave comments on the publication, you must to register.