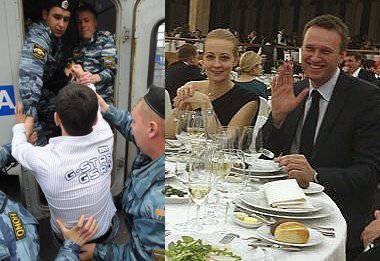 In pursuit of power, Navalny cynically uses his supporters.


“Naunal neuninoy” - reads an established Internet meme. Its meaning is simple: of all the troubles, the “cyber-activist” Alexei Navalny leaves every time unharmed. But not because they are not really guilty of anything, but because others are constantly being blown away for him. "Rams", "hamsters", "Internet infantry" - in a word, adherents of the "sect of witnesses of Navalny". So this time ...

В stories with the “bad apartment,” in which the “Navalny Brothers” - supposedly a semi-underground circle of volunteers supporting a blogger candidate, which is absolutely independent of the official headquarters — tons of campaign products with no output printed on the printer, wouldn’t manage to directly press Navalny himself. On the nuts get ordinary agitators - but not their leader.

Yes, you can easily catch Navalny in a lie: only yesterday he wrote in his blog, commenting on a photo frame in which the Social Revolutionary Deputy Oleg Pakholkov is holding green round stickers with the words “Navalny 90%”: “As you can see, the little fool shows journalists completely legal sticker of my staff, paid from the electoral account. " And today an official statement was issued by Navalnovsky headquarters with these words: “... judging by the copies of printed materials that were shown by the media, these materials are not campaign products, much less illegal campaign products.” Who is lying here: Navalny or his staff officers? A rhetorical question: as recently as a couple of days ago, these gentlemen were already caught on the double discrepancy between the cost of “campaign cubes”, and the new opposition arithmetic “6,5 thousand = 10 – 12 thousand” is already known to everyone.

You can also ask, after an eyewitness Dmitry Noskov, an assistant deputy Pakholkov, who were those people in civilian clothes who resisted the police officers during the “storming” of the “bad apartment”, and even had weapon? And what is the title of another citizen in a “plaid shirt” without shoulder straps, who, on arrival, ordered that emcheesniki leave the house? The detail is important because the EMERCOM workers had with them the equipment for instant opening of doors - without which, the door to the Brothers' apartment was eventually opened by the “grinder” for several hours, sufficient to destroy any documentation.

But all this is nothing more than nuances. Pompous decor on the semi-emergency building of the election campaign of the Kirov fraudster. According to the results of the scandal, Navalny will not be removed from the elections for the art of his “sixes”. He has nothing to do with it. His staff officer Volkov, his press secretary Veduta immediately disowned the "Navalny Brothers". Now, no matter how much they give for the resistance of the police, Bulk will remain in the shadows. "The volunteers overdid it, but we are in chocolate."

But not for the first time already Navalny disowns his own "sheep". The essence of its political promotion is reduced to a banal, but effective transfer of any muddy, illegal or even criminal processes to unanswered supporters, from whom it is then so easy to disown.

Who collects Navalny money? Yes, some strange guys with online wallets, and if they eventually nastuchat on the head, then they themselves are to blame, and Navalny is innocent, like a baby. Earlier, who came to an unauthorized rally in the center of Moscow on the occasion of the bulk planting? “Ordinary bloggers,” a few dozen people who were convicted by riot police, but Navalny is all dressed in white and urges not to be bullied more on the streets of the capital. And even earlier - who made the "hamsters" sit on the asphalt, provoking them to collide with the police? Ah, yes, whoever called, didn’t - he’s not a provocateur! Now the “prisoners of 6 May” are languishing in the SIZO, they face serious terms - but, of course, it is easy for them to sit in the jail, knowing that Navalny, meanwhile, is drinking champagne at Kremlin receptions as a shareholder of Aeroflot.

How how? "They themselves want to suffer for the sake of the hero"? But not at the hands of the hero himself, after all! But a case that happened quite recently, during one of the campaign meetings of Navalny with Muscovites. Young nazbols, Alexander Kurkin and Maria Vakhrusheva came to that meeting. The latter, during the events at the State Duma, actively fought "for the freedom of Navalny" and even gained fame - climbed onto a police avtozak, which was unmercifully removed by riot police. And now the girl came to her idol. After the children were not given a word, they moved closer to Navalny and asked to answer a single question. Is the leader of the belolentochnikov ready to reconsider the results of Yeltsin’s privatization if he comes to power? “However, everything ended in a rather disgusting way: they were pushed aside, pulled out, cursed and taken out, slyly poking their fists,” says Eduard Limonov in his LJ.

Such walks on the heads of their own supporters cost a lot, they talk a lot about the person. “You do not reflect, you spread”, - this style of communication between Navalny and his minions seemed just an unsuccessful Internet joke, until it came to real landings. It is terrible to imagine how this could end, if, God forbid, Navalny really gets at least some power.

Ctrl Enter
Noticed oshЫbku Highlight text and press. Ctrl + Enter
We are
What you didn't want to know about EnglandHamsters started thinking ...
60 comments
Information
Dear reader, to leave comments on the publication, you must to register.