The war of the Shiites and Sunnis and the fatal mistake of the West ("Atlantico", France) 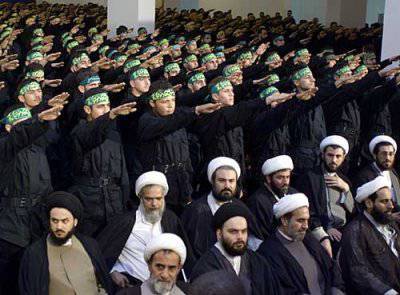 Bahrain's interior minister said the country's police detained eight people suspected of involvement in a terrorist group linked to Iran. It is believed that the terrorists received instructions and funding from Iran, Iraq and Lebanon. Apparently, the main task of the group was to support Shiites living in the territory of Bahrain.


Over the weekend, the Sunni dynasty in power in Bahrain (their minority in the country) once again arranged persecution of the Shiite opposition (true or not, but it is considered controlled by Tehran), marking the anniversary of the February 2011 uprising of the year, which was drowned in blood blessings of Saudi Arabia and the Cooperation Council of the Arab States of the Persian Gulf (it includes Sunni “pro-Western monarchies” opposing Shiite Iran and any democratization of society). The fact is that the Sunni regimes of the Persian Gulf (first of all, Saudi Arabia, Kuwait, Qatar and the United Arab Emirates), which are sent to Bahrain weapon and a soldier to crush the democratic Shiite opposition, fear the "Shiite-Iranian threat." This is especially noticeable after Western intervention in Iraq in 2003, which allowed the Shiite majority to come to power after long years of the Sunni regime of Saddam Hussein (it was perceived as a “bastion” on the way of Shiite Iran). This fear of the “Shiite axis” is shared by other Arab states, including Jordan and Egypt, in which the Muslim Brotherhood (Sunnis) hold power.

The “Shiite crescent”, which relies on Iran, Lebanon and Iraq, extends right up to eastern Saudi Arabia and Kuwait: there are significant Shiite minorities that are poorer than the rest of the population, but are more demographically active and more susceptible to the revolutionary propaganda of Tehran. In addition, the Shiite axis includes Alawite Syria (as long as power belongs to the Assad clan) and the pro-Iranian-minded Shiite Hezbollah, which has long become the real owner in Lebanon. Hezbollah’s popularity is largely due to the widespread use of anti-Israeli rhetoric, the purpose of which is to attract the Arab masses to its side and make them forget that the Shiite-Iranian bomb is directed primarily against the Sunni monarchies ... Hence, Qatar’s desire to establish control (with through funding) over the Palestinian Hamas movement in the Gaza Strip, which has long followed in the fairway of Hezbollah and received funds from Iran.

Who are the Shiites?

In the Sunni media, they are often represented as “moderate” representatives of the “majority” (80%), while the minority groups (15-20%) have earned the stigma of “fanatics” and “heretics”. In fact, the concept of "Shi'ism" comes from the Arabic "shia", which means the followers of Ali (he was Muhammad's cousin and cousin, fourth successor or "caliph", who was overthrown by his Sunni enemies after an unfair trial). The Sunni caliph expelled the Shiites from the country (initially they were no less, and almost more, Muslims than the Sunnis), and they gradually turned into contemplative Islam with a rigid structure of the clergy. They call Ali and his descendants the only legitimate heirs of the Prophet Muhammad and worship their own saints. Their main martyrs are Ali Talib (killed in 661, the mausoleum is located in Iraqi Najaf) and his son Hussein died at the hands of the Sunnis (the tomb is in Iraqi Karbala).

As for the Sunnis, their name comes from the Arabic “Ahl al-Sunna (people of the Sunni). This means that they are the guarantors of the "traditional" dogma of Islam, that is, the Sunnah, which is based on the "Hadith" or commentary of the Prophet Mohammed. Be that as it may, the most radical schools in Islam were founded by Sunnis. The Shiites never put an end to the interpretation of the Qur'an, whereas the Sunnis who led the Caliphate did this in the tenth century, banning all liberal and non-orthodox movements, that is, the Sufis, Shiites and rationalistic sects (mutazilites), who nevertheless predominated in Baghdad in the golden age of Islam. Such obsession with dogma and the desire to control other Muslim movements can be considered the distant forerunner of Salafism and even the Muslim Brotherhood, political and orthodox Islam, retrograde-minded Islam, which, with the support of the oil monarchies of the Persian Gulf, managed to undermine the positions of secular and Shiite groups. So, for example, Qatar “in a modern way” goes to the fulfillment of this task and from the very beginning of the “Arab spring” supports the Islamist opposition in Morocco, Syria and Mali ...

Stuck in the minds of people in the West about the “evil Shiites” and “moderate Sunnis” is related to the fact that the largest and theocratic Shiite movement is led by Ayatollah Khomeini and the Islamic Republic of Iran, while in fact many Shiite leaders criticized the Khomeinist ideology, and the most open and secular currents in Islam are Shi'ism (and brutally persecuted by Sunni Orthodox). Among the small but extremely influential sects in Shiism are primarily the Ismailis (the name is associated with the seven most respected imams), who became known for their esteemed leader and benefactor Aga Khan.

The Ismailis operate in Central Asia (primarily in Pakistan), where they own a number of medical centers. In addition, the Alawites in Syria, the Druze in Lebanon, Syria and Israel, the Alevis in Turkey can also be noted. The Alawites brought on themselves the wrath of the Sunnis, as they invariably supported the secular and nationalist parties to fight the supporters of the Shari'a, who perceive them as second-class citizens. Today, they fear the neo-Ottoman Islamism of Prime Minister Erdogan, whose positions are close to the Muslim Brotherhood. Shiites make up the majority in Iran, Iraq, Azerbaijan, Lebanon and Bahrain. In addition, they (for the time being) hold power in Syria thanks to the Alawites and the Assad family, which the aspiring Sunn% majority struggles with trying to take revenge for the 70%. There are Shiites in Yemen, where Sunni authorities regard them all indiscriminately as separatist rebels. Finally, significant Shiite minorities are found throughout the Arabian Peninsula: Qatar, Al-Hasa in Saudi Arabia, Kuwait (all of these zones have rich oil deposits) ... Everywhere, where Shiites are in the minority, Sunni groups mock them and even pogroms are organized from time to time: this applies to Pakistan, Afghanistan, Kuwait, Bahrain, Saudi Arabia, and even Iraq, where the Shiite-Sunni war has been raging since the overthrow of the power of Saddam Hussein.

From a strategic point of view, the pro-Iranian Shiite axis is supported primarily by China, Russia and countries hostile to NATO or America, such as Latin American states and Cuba close to Hugo Chavez. The West, following the logic of the Cold War, in response, supports the Islamist Sunni axis, which is directed against Syria, its Iranian allies and Hezbollah. Be that as it may, such hatred between the Sunni Gulf countries and the Shiite minorities close to Iran is not only strategic: back in 1927, under pressure from the Wahhabis, King Inb Saud released the famous fatwa according to which the Shiites had to go to Sunni faith or leave the country ... Pakistan, one of Saudi Arabia’s main allies and the United States (as well as a patron of the Taliban and other Islamist movements that contributed to the spread of Salafism after the Cold War), oppresses the Shiites ( assertions of Sharia law) to the same extent as Christians and Hindus, calling them "accomplices" infidels. I will give the last of many examples: 16 February 52 Shiite died as a result of the next terrorist attack, which staged the Salafis in the south-west of Pakistan. According to Human Rights Watch, in the country 2012 Shiites were killed in the country in 400, while the forecast for 2013 promises to be much darker: in January alone the number of victims reached 165 people ...

Alas, the West does not consider it necessary to bet (as it was in Iraq) on Shiite movements or secular minorities (such as the Alawites in Syria and Alevis in Turkey) opposing Salafism, and also to protect the rights of Shiite minorities in the Gulf countries and Pakistan or Christians in the East, who are also persecuted in all Sunni countries. Today, the West is driven only by oil and short-term interests, for the sake of which it continues to make a deal with the powers of the Sunni fanatics (Saudi Arabia, Pakistan, Kuwait, etc.) and is inferior to all their obscurantist and neo-imperialist demands. He never criticized or tried to hinder the achievement of the goal set by these states: conquest (re-Islamization) of all Muslim countries with subsequent Islamization of the West by financing (with the blessing of the NATO nations still convinced in the reality of the Russian threat of NATO) radical Islamist associations fighting against the values infidel countries and the integration of Muslim minorities into their society.

Ctrl Enter
Noticed oshЫbku Highlight text and press. Ctrl + Enter
We are
Iran in the Syrian conflict. The confrontation with Saudi Arabia and the interests of the Shiites"Non-Arab Emirates": migrants in the Gulf countries
50 comments
Information
Dear reader, to leave comments on the publication, you must to register.