How Putin’s visit to Azerbaijan was demonized

August 15 2013
149
Today is one of the most talked about News in the Commonwealth space is a fleeting visit of Russian President Vladimir Putin to Azerbaijan and negotiations with Ilham Aliyev. Against the background of the words that the presidents were gathering in order to discuss economic and humanitarian cooperation, a conspiracy theories regarding the presence of Defense Minister Sergei Shoigu in the Russian delegation, and generally why Putin went to Baku right now, surfaced. 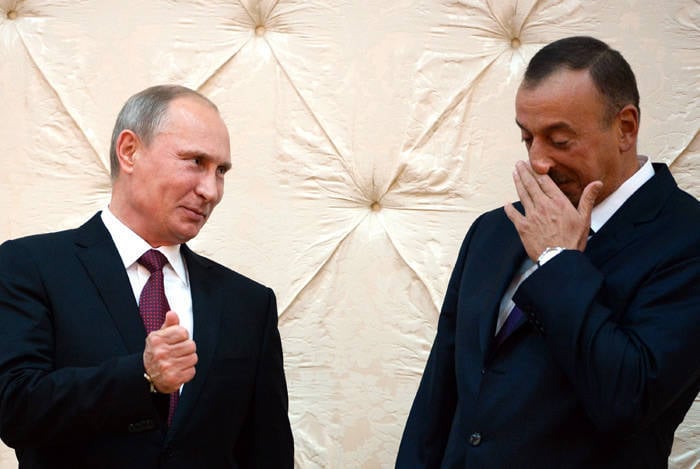 Let's say that not quite good languages ​​have already managed to announce that Putin’s trip together with a number of key ministers in Baku introduces, to put it mildly, some ambiguity in the relations between Russia and Armenia, which are included in the CSTO. Like, if Putin and Shoigu flew to the capital of Azerbaijan, then the allies from Yerevan should certainly regard this as unfriendly towards themselves the move of the Russian authorities. The opinion is, of course, interesting, but if we follow this logic, it turns out that today Putin and the ministers of the Russian government are generally more than Minsk and Astana to fly ...

So, the visit took place, the presidents talked on a very positive wave, talked about the unprecedented growth in commodity turnover in the end of 2012 (increased by more than 47%), spoke about strengthening cultural and social ties between the two states, announced close political views on a number of problems and hoped that cooperation between Moscow and Baku should certainly deepen.

It would seem that the visit of one president with a delegation to visit another president is quite benevolent and having positive consequences in bilateral relations, but ... Recently, a whole segment of the population has emerged who is confident that Putin cannot fly to other states . And, they say, if the Russian leader went to Azerbaijan, then it is imperative to look for in this some kind of almost secret sign, a veiled message to someone and about something ...

We offer readers a kaleidoscope of versions of various Russian and foreign publications and independent observers about why Vladimir Putin went to Azerbaijan, and he even brought along a half-dozen ministers, including the head of the country's defense department.

Edition "Moscow Komsomol" in an article with a subtitle “The Russian president turned out to be longer” refers to how Caspian ships entered Baku flotilla. Allegedly, the entry of these ships into one of the Azerbaijani ports certainly indicates that Vladimir Putin decided to demonstrate his support for Aliyev in the upcoming elections with a demonstration of military power.

An interesting thing turns out ... If, to demonstrate the support of one candidate or another in a particular country, Putin will certainly introduce military equipment there, then this is a real sensation! By the way, the idea that Putin’s visit, along with several representatives of the government’s security bloc to Azerbaijan, was organized solely for the purpose of supporting Aliyev in the elections, is expressed by some Western media. In particular, the media empire shared this inference. with the BBC.

But if you listen to this mental maxim, then who were then supported by the American and French warships, which entered the port of Vladivostok in May of this year during the celebration of the 68 anniversary of the Victory? Did they decide to congratulate Vladimir Putin on their year of presidency after the inauguration of 2012 ... By the way, French warships, I remember, entered Libyan ports, even shortly before the start of the “Destroy Gaddafi” action, transmitting warm greetings from the then responsible tenant on the Champs Elysees of Nicolas Sarkozy ... Therefore, in this, too, you need to look for a conspiracy and transfer to the visit of the Russian leader to the leader of Azerbaijan.

Well, even if Putin decided to support Aliyev in his desire to preserve power in the country, the need to use the Caspian flotilla for this support seems far-fetched.

Internet portal "Vesti.az" as a version of the visit to Azerbaijan by the extended Russian delegation goes even further. He calls the reason for the visit of Putin and Shoigu to Azerbaijan that in Baku, Ankara and Tbilisi recently announced the creation of a triune Georgian-Turkish-Azerbaijani army with almost a single command. They say that Putin was outraged that Azerbaijan is going to integrate its army with the army of the NATO country (Turkey) and plus with the army of the state, which is, to put it mildly, not at all in tender relations (Georgia).

At the same time, the authors of such an idea are somehow not too concerned about the endless strangeness of the very thought that the Turkish army for some reason suddenly decided to unite with the Georgian and Azerbaijani armies, and even with those territorial, let's say, inconsistencies that exist Georgia and Azerbaijan. Erdogan is a politician, of course, eccentric, but not as much. He has enough problems today and in the country, and then there is also some kind of semi-credit idea of ​​merging the three armies, which has passed at the level of gossip. However, gossip is gossip, but this is precisely the reason why Putin’s visit was seen not only by Vesti.az, but also by representatives of the so-called blogosphere in Georgia. They say that Putin was mortally frightened by the unification of the armies of the three states, and now he is going to (or has already) made a proposal to Ilham Aliyev that he cannot refuse - support in the elections in exchange for unwillingness to unite the army ... In general, the conspiracy science is serious, when the Latvian president proposed to Estonian and Lithuanian to unite three Baltic armies, and active community activists declared at once that this is a kind of response of Russia to the revival of military power ...

Edition "Lragir" (Armenia), through the mouth of Hakob Badalyan, is also decided on exercises on some kind of demonization of Putin’s visit to Baku. Here are a couple of quotes from Mr. Badalyan:

After returning to the office of president, he makes his first imperial visit not to Armenia, but to Azerbaijan. This is very symptomatic.

Moscow’s moves have recently caused a negative response in Armenia, and although the balance of attitudes towards Russia in Armenia is still positive, the trends nevertheless indicate that in the coming years this balance may change, as more and more people in Armenia begin to understand that Moscow’s policy causes more problems for Armenia - risks and challenges than neutralizes them.

Further, the frank pain and claims of the author Badalyan to Putin:

Otherwise, than the first to visit Baku, Vladimir Putin would have tried first to come to Armenia and offer a sincere and open conversation about the existing problems, demonstrate to the Armenian public readiness for discussions, diagnosis of relations and their treatment.

It turns out that Putin has an external advisor - Hakob Badalyan ...

By the way, “the first imperial visit” is generally how? .. All of Putin’s previous visits to other countries turned out to be ordinary, and here, you understand, imperial breathing ... Badalyan needs a snack.

It is surprising that Putin has not yet been accused of deciding to “surrender” Nagorno-Karabakh to Baku, thereby “crucifying” the Russian-Armenian friendship ... Well, yes, conspiracy, however ...

If, however, go away from the personal grievances of various authors to Vladimir Putin and present the real results of the visit of the Russian delegation to Azerbaijan, they are as follows:

Joint oil production contracts have been signed between Rosneft and SOCAR (Azerbaijan), while production will be conducted within the framework of the joint venture being created.

The transport ministers of the two countries signed an agreement on the construction of a bridge across the Samur River.

The heads of the Ministry of Emergency Situations signed an agreement and a cooperation plan on emergency response of man-made emergencies and natural disasters up to 2015.

An agreement on cooperation in the field was signed aviation.

Representatives of the Ministry of Defense agreed on joint maneuvers in the Caspian Sea.

The foreign ministers signed an agreement to deepen humanitarian cooperation to 2015. As part of this agreement, centers for the study of Russian (in Azerbaijan) and Azerbaijani (in Russia) languages, interfaith groups will appear in the two countries, promoting good-neighborly relations of different cultures.
Not without discussion of the crisis associated with the status of Nagorno-Karabakh. At the same time, Ilham Aliyev mentioned the term “Armenian occupation” and stated that Yerevan does not fulfill a number of international obligations, to which Vladimir Putin replied as follows:

On the Nagorno-Karabakh problem, I want to emphasize: Russia actively promotes the earliest possible resolution of the conflict, which is possible only by political means,
-

thereby making it clear to the Azerbaijani leader that this issue within the framework of the short-term visit, and even without the presence of the Armenian delegation, cannot be solved in any way, and that the purpose of this visit is clearly different.
So what is it? For some, in the published facts of the signing of several bilateral agreements at once, and for others in the conspiracy and demonic plans of the heads of both states (whether these plans were or not, it is not important for conspiracy experts ...)

Ctrl Enter
Noticed a mistake Highlight text and press. Ctrl + Enter
We are
Yerevan Maidan: who is shaking Armenia?Caucasian affairs