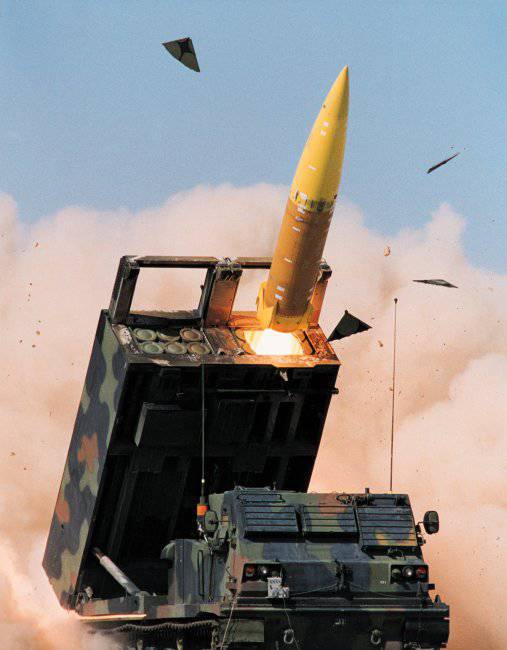 Developed by Lockheed Martin Missiles and Fire Control and adopted by the US Army in 1983 year. Currently, it is in service with the 14 armies of the world: Bahrain, Norway, France, Germany, Greece, Israel, Italy, Japan, South Korea, Holland, Turkey, the UK, etc. In 1986, an international consortium of production MLRS MLRS, which included the company the United States, Germany, Britain, France and Italy.

The artillery part of the PU, mounted on the tracked base of the American infantry fighting vehicle M2 "Bradley", includes:
fixed base mounted on the chassis;
a turntable with a swinging part fixed on it, in the armored box farm of which there are two WPCs;
loading and guidance mechanisms.

The required rigidity of the base of the launcher in the firing position is ensured by turning off the suspension of the chassis. In the armored cabin is placed the calculation of three people: the commander of the installation, the gunner and the driver. There is also a fire control equipment, including a computer, navigation and topographic location devices, as well as a control panel. All necessary information is displayed on the light panel of the control panel. The MLRS MLRS fire control equipment can be interfaced with automated field artillery fire control systems. The overpressure created in the cockpit and the filtering unit protects the calculation from gases generated during firing and from damaging factors due to radioactive contamination of the area or the use of chemical weapons.

The MLRS launcher does not have traditional permanent guides. For loading into the nests of its armored box-shaped truss (the swinging part of the PU), two equipped disposable transport and launch containers are placed. They are a package of six fiberglass tubular rails mounted in two rows in a box farm made of aluminum alloy. TPK equipped with rockets at the factory and sealed, which ensures the safety of NUR unattended for ten years. Prelaunch preparation of missiles for firing is practically not required. The launcher is reloaded by means of two autonomous charging mechanisms (with electromechanical drives) mounted on a PU in a box-shaped farm above the slots for TLC. The operation is carried out by one or two calculation numbers using the remote control. At zero elevation angle, the loading mechanism with a winch lifts the WPC from the ground up to the stop and pushes it into the nest of the box-shaped truss.

Usually two launchers with trailers are attached to one launcher. The transport vehicle is a 10-m high-performance vehicle M985 (wheel formula 8X8). An 2,5-t tilt crane is mounted on its body with which containers are loaded and unloaded. By car and trailer transported by four TPC (six missiles each). Ammunition capacity of one launcher, including its 12 missiles, is respectively 108 NUR.

After the introduction of firing equipment into the fire control equipment (including the response time of the head fuses), the PU is guided by a command using electro-hydraulic actuators. In case of failure, manual actuators are provided. It is not necessary to level the launcher before firing, since the necessary corrections are constantly introduced into the fire control equipment. This is provided by an appropriate system with a gyro-stabilized platform. The same system also provides the necessary accuracy in salvo firing.

The uncontrolled M26 rocket includes a warhead (warhead), a solid propellant rocket engine and a four-blade stabilizer that opens in flight. For NUR created and developed the following cluster warheads.

Anti-tank with mines AT-2 (weight 107 kg, maximum range 40 km) was developed by specialists of Germany. It is intended for remote mining of the area in the vicinity. Warheads are equipped with anti-tank anti-mine mines AT-2. In the thin-walled case of the warhead there are seven containers of four mines each. At an altitude of about 1,2 km, containers are first scattered, and then mines are thrown from them, which descend on parachutes. Just before landing, the parachute is separated, and a mine that has fallen to the ground with its spring-loaded legs is placed in a firing position - with a cumulative funnel up. A pin sensor extends from the housing. The time of self-destruction of mines is set before shooting and can be from several hours to several days. One volley of 336 mines in an area of ​​approximately 1000x400 m is created by a single-shot volley. A cumulative charge of a mine is able to penetrate armor with a thickness of up to 140 mm.

Anti-tank "TGW" (Terminally Guided Warhead, weight 107 kg, maximum firing range 45 km). It is equipped with combat elements equipped with homing heads in the final part of the flight path. The development of this warhead was carried out by a consortium of industrial firms of the USA, Germany, Great Britain and France.