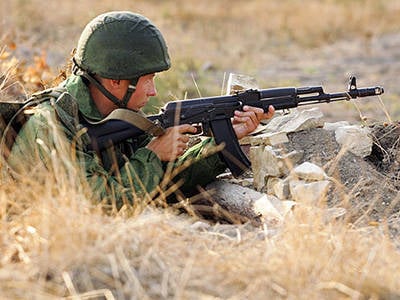 To participate in the exercise, the battalion of the 31st separate airborne assault brigade was reassigned to the command of the Central Military District on the eve and transferred by military transport aircraft aviation from Ulyanovsk to the Kant airbase.


The Russian paratroopers of the 31-th separate airborne assault brigade (Odbrs) take part in the anti-terrorist exercises of the Central Military District (TSO) at the Russian military airbase “Kant” deployed in the Kyrgyz Republic.

To participate in the exercise, the battalion of the 31 battalion on the eve was reassigned to the command of the Central Military District and transferred by military transport aircraft from Ulyanovsk to the Kant airbase.

The task of the paratroopers is to work together with the units of the air base and the Kyrgyz military to work out how to strengthen the protection and defense of the base facilities, detect, block and destroy conditional terrorist groups, conduct engineering reconnaissance of the deployment routes.

During the exercise, the Russian and Kyrgyz servicemen will carry out live firing at the Ala-Too and Balykchy ranges of the Armed Forces of the Kyrgyz Republic.

In total, about 400 paratroopers with standard small arms were deployed to participate in anti-terrorism exercises. At the end of the exercise, the 31 battalion of the unit will return to the point of permanent deployment - the city of Ulyanovsk.