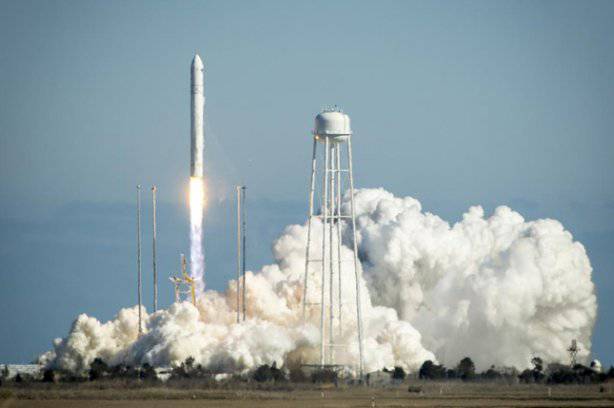 The originality of this event was noted by both specialists and the general public interested in space travel.


On April 21, the Antares launch vehicle was successfully launched from the Test Center on Wallops, Virginia. This event opened the way for regular space rocket flights. Before 2016, it is planned to carry out at least eight launches of the launch vehicle for the delivery of cargo to the International Space Station (ISS).

It is noteworthy that the first stage of the rocket was developed and manufactured by Ukrainian enterprises - "PO" Yuzhmash "and" KB "Yuzhnoye". These companies have concluded a corresponding long-term contract (up to 2018) with the American corporation Orbital Saenz. The program is funded by the United States National Aeronautics and Space Administration (NASA). Total for its implementation allocated 1,9 billion.

The successful test launch of the Antares launch vehicle was an important step towards the further development of Ukrainian-US relations in the rocket and space industry as part of the strategic partnership policy between Ukraine and the United States. The next launch of the launch vehicle to deliver a small cargo to the International Space Station will take place as planned in August of this year.

Cooperation in the field of space exploration between Ukraine and the United States is carried out in fact from the first days of the independence of our state. It should be noted that the first cosmonaut of independent Ukraine Leonid Kadenyuk flew in space on 1997 on the American space shuttle Columbia. The United States was one of the initiators and the main source of funding in the framework of the Sea Launch project.

Ukraine is among the top five countries in the market of space services and technologies. Ukrainian rocket and space industry is more than 40 enterprises. Among them - the world-famous "Design Bureau" Yuzhnoye "and" Production Association "Southern Machine-Building Plant" in Dnepropetrovsk. They create and mass-produce launch vehicles, spacecraft, control systems, orientation and trajectory measurements. The development of the Sich-1, Okean-O, AUOS and Micron spacecraft, Zenit-3SL, Dnepr, Dnepr, Cyclone-3 launch vehicles was a great achievement of the Ukrainian specialists.

Today, Ukraine is known on the world market for its space production: the Kurs equipment for the International Space Station; missile aiming systems, control equipment for the Soyuz, Progress, and Proton space complexes; unique ground objects
infrastructure: radio telescope RT-70, control and correction stations for global navigation satellite systems,
a network of observations of geophysical phenomena. The space industry has become one of the key ones in the national economy, and the space activity of Ukraine is an integral part of international projects on the exploration and use of space.

Our state constantly participates in major international events in the space industry and is a member of most international organizations in the field of space, such as UNCOPUOS (UN Committee on the Peaceful Uses of Outer Space), COSPAR (Committee on Space Research), IADC (Inter-Agency Coordination Committee pollution in space).

An important role in the development of the rocket and space industry was played by the creation of 29 in Ukraine in February 1992 by the decree of the president of the central state body - the National Space Agency of Ukraine (from the 2011 - the State Space Agency of Ukraine - SSAU). Since its creation, the SSA has signed 38 interstate and interdepartmental agreements with 16 countries.

Significant work is underway to improve the use of Ukraine’s space potential in order to solve pressing problems of socio-economic, environmental, cultural, informational, scientific and educational development of society, guarantee national security and protect the geopolitical interests of the state. For this, 30 March 2011 was adopted by the decree of the Cabinet of Ministers of Ukraine adopted an important document - the Concept of the implementation of state policy in the field of space activities for the period to 2032.

The implementation of the concept will ensure the formation of an economically sustainable, competitive, diversified rocket and space industry of the national economy. In particular, the concept provides for the development of space technologies and their transfer to the real sector of the national economy and the sphere of national security and defense, improvement of rocket and space technology and technologies for its creation, obtaining new knowledge, increasing
scientific and technical potential of the state and the educational level of society, the implementation of an effective industrial policy and the modernization of production, the commercialization of space activities, the deepening of international cooperation in space.

Among the practical results of the implementation of the concept is the creation and support of operation in orbit for a long period of time grouping of remote sensing spacecraft and telecommunications satellites; conducting a wide range of scientific space research (including the Moon and near-moon space); creation of promising output systems (in particular, the Air Launch complex); ensuring the presence of Ukrainian enterprises in the global space services market; international activation of space activities in the Baltic-Black Sea basin. A document of this level was approved for the first time in the years of independence.

The implementation of the concept will allow Ukraine to continue to occupy a worthy place among the space powers of the world. Practical experience of cooperation with the United States is a clear confirmation of this.

On the eve of the test launch of the Antares, I met with the head of NASA, Charles Bolden, the management of Orbital, a delegation of the State Space Agency of Ukraine, state-owned enterprises of Ukraine, Yuzhnoye Design Bureau and Yuzhny Machine-Building Plant. During these meetings, we discussed further prospects for implementation Antares program with the participation of Ukrainian rocket enterprises, as well as new directions for the development of Ukrainian-American cooperation in the space industry.

We hope that the next launch of the launch vehicle in August will be a good gift to Ukrainian engineers and space scientists for the 22 anniversary of the independence of our state.

The Antares rocket carrier was developed by the American Orbital Sciences Corporation with the participation of the following contractors: the state enterprises of Ukraine, the Design Bureau Yuzhnoye and the Southern Machine-Building Plant, Aerojet (USA), ATK (USA) and several others.

Antares is a two-stage liquid-fuel booster rocket designed to launch payloads weighing up to 7 tons in low-Earth orbits.

The first stage of Antares was designed by Yuzhnoye Design Bureau and manufactured by Yuzhmash in accordance with the contract concluded with Orbital Sciences in 2008 for a period of up to 2019. The Yuzhnoye Design Bureau develops and controls the manufacture of containers for fuel, high pressure tanks, valves, sensors, fuel supply and supply systems, pipes, wires and other related equipment of the first booster stage of the launch vehicle.

The first stage of the rocket carrier is equipped with two AJ-26-62 rocket engines, modified by the American company Aerojet based on the NK-33 engine provided by the Russian company United Engine Corporation and developed in the 70. of the last century for the project of the super-heavy rocket H-1 of the unrealized Soviet Lunar program. The second stage is equipped with a solid Castor-30 engine, developed by the American company ATK.

Ctrl Enter
Noticed oshЫbku Highlight text and press. Ctrl + Enter
We are
On the ISS will appear "Andronaut"To Mars through the Moon
10 comments
Information
Dear reader, to leave comments on the publication, you must to register.