Summer political stagnation in Ukraine revived the statement made by the country's defense minister, Pavel Lebedev. According to him, the military department decided to abandon the creation of an operational-tactical missile complex "Sapsan" in the form and with those performers, as it was spelled out in the relevant state targeted program.

According to the Minister of Defense, the executors of this rocket program have spent considerable funds for five years, but have not received any results. During this time, another enterprise, Luch, created an effective alternative in the form of a new missile system with significantly better performance characteristics. The prototype of the latter will be demonstrated this year, and production is scheduled for 2014 – 2015 years.

Initially, Ukraine became the owner of more than a decent rocket stock of the collapsed Soviet Union. Much has already been written about the fate of strategic missile systems and the 43 of the rocket army of the Strategic Missile Forces. Also no less impressive was the arsenal of operational-tactical and tactical missile systems, numbering more than a hundred launchers, commonly referred to in open sources as “Scud” and “Point”. They became the basis for the formation of the 1-th missile division, functionally part of the containment force. 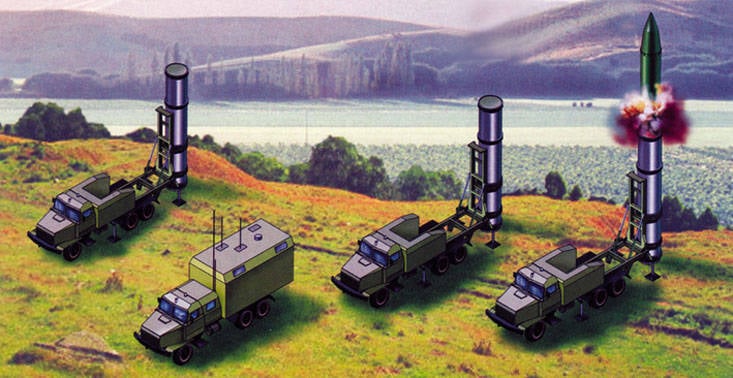 According to experts, it was quite an adequate solution for the conditions of that time. Having existed for several years, thanks to the expert and financial assistance of the western partners, the division was disbanded, and all the Scuds, together with the “Points” of earlier releases, were recycled. At least today and in the foreseeable plans for reforming the Ukrainian Armed Forces (VSU), we are talking only about one missile unit with the Tochka Broadcasting Company — the 19-th separate ground-based missile brigade with 12 launchers.

Understanding that the existing missile systems are not eternal, already in the 90s of the last century in Ukraine they began to implement a project to create a new missile system, called Borysfen. It is no secret that in this case, a part of the documentation for the barbarically destroyed Oka missile system, which turned out to be on the territory of Ukraine, was used. To bring the project "Borysfen" at least to the level of a prototype did not work. Nevertheless, the developed defense industry of Ukraine and the level of cooperation made this quite achievable.

At the beginning of 2000, one of the countries of the Middle East began to work out the issue of equipping its armed forces with operational-tactical missile systems with a ballistic missile trajectory and cruise missiles for the Air Force. In response to the appeal of the Arab side, the Ukrainian Yuzhnoye Design Bureau proposed the projects of the Thunder PTRC and the Korsun cruise missile. These products were also not embodied in the metal, but at the theoretical level they created a certain reserve. Placed for a short time on the website of Yuzhnoye Design Bureau, it gave an idea of ​​the planned appearance of these weapon systems. For example, the KRAZ Ukrainian four-axle chassis were going to be used as a base for the OTRK Thunder. Interestingly, soon after the convincing request of the American side, this information was removed from the site and the talk about the creation of such missile systems by Ukraine for foreign customers ceased.

Somewhat later, they decided to develop a missile system for the APU. The project was named “Sapsan” and its creation was launched as part of a separate state targeted program. Yuzhnoye Design Office was identified as the lead developer, and the final assembly was planned to be deployed at the Southern Machine Building Plant. Regarding the need for the Sapsan project, many official statements were made at all levels. In particular, according to the head of the Ukrainian General Staff (1996 – 1998, 2002 – 2004) Colonel-General Alexander Zatynayko, Ukraine, when creating its own missile system, uses the range of the missile permitted by the international control mode for rocket technologies.

In the context of the above-mentioned statement by the Minister of Defense about the rejection of Sapsan, the question arises of whether weapons for national aircraft. A number of analysts consider closing the program to be nothing more than a special operation successfully implemented by the special services of Western countries. It is no secret that the topic of the proliferation of weapons of mass destruction and missile technology is very sensitive for the United States and its allies. This is nothing new, but another thing is that the secret under the seven locks are the mechanisms for implementing such a policy. Similar projects in Ukraine, however, as in other countries, were stopped by diplomatic, economic and other types of pressure on the leadership. Sources claim that in the case of Sapsan the issue was resolved in this way, mainly through the efforts of agents of influence.

Also, a significant role in the rejection of Sapsan was played by the administrative lobbying of their interests by the leadership of Luch, the company that offered an alternative solution to the Yuzhnoye design bureau. The search for ways to reach the top officials of the country and the military department by a Kiev enterprise bore fruit.

There is an objective side to the issue. We can agree with the opinion of the opponents of the Sapsana project that the creation of a complex with the volume of its serial production for an internal customer in the size of a single missile brigade kit is not economically feasible. The argument is powerful, if you do not take into account the ethical point. Already three presidents of the country, including the current one, have publicly announced the need for Ukraine to create its own missile complex as a factor in maintaining and developing the rocket and space industry of the national defense industry. But at the level of their subordinates, in particular the Minister of Defense of Ukraine, a statement was made in an absolutely opposite direction. Doubts are circulating in the expert community about the reality of the alternative proposed by GKB Luch. The argument is very simple: it’s one thing to create aviation missiles and anti-tank systems, of which the potential of Luch is beyond doubt, but quite another is multifunctional missile systems for operational and tactical purposes.

The initiators of the rejection of the “Sapsan” look at the situation exclusively from the standpoint of the interests of the military department. At the same time, in most countries of the world, there certainly would have been a state-wide approach rather than a narrow departmental one: a balance of interests between defense, science, the military-industrial complex, the sphere of military-technical cooperation, diplomatic activity, social policy. It is ridiculous to talk about obvious things, but it is precisely such aspects that include such a large-scale project to create a sample of weapons capable of playing the role of not only weapons of deterrence and defeat of the aggressor, but also a stimulator of the development of many spheres of the country's life and sectors of the economy. As for the rejection of the Sapsan and the failure of Yuzhnoye Design Bureau, the problem apparently does not exist in the facilities of the military-industrial complex enterprises to create modern weapons, but in the unsatisfactory management of the project, as well as in the lack of political will of the country's leadership in its implementation.

The main developer of the Sapsan complex in 2007 was Yuzhnoye Design Office, and the producer was the Southern Machine-Building Plant (both enterprises are located in Dnepropetrovsk). Work on the product, which was supposed to combine the properties of both tactical and operational-tactical complexes, and multiple launch rocket systems, was supposed to be completed in 2012 with the budget 700 – 800 million hryvnia. Another 1,5 billion hryvnia was planned to send to the mass production of "Sapsan" for the APU.