Thermonuclear 53 summer of the year


August 12, 2013 marks the 60th anniversary of the test of the first Soviet hydrogen bomb RDS-6s. It was an experimental charge, unsuitable for military operation, but it - for the first time in world practice - could be installed on aviation carrier. Thus, the success of the test became evidence not so much of a scientific and technical as a military-political breakthrough.

In 1946, in the remote village of Sarov, where the small plant of the Ministry of Ammunition No. 550 was located, work began on creating a base for KB-11 (from the 1966 of the year - the All-Union Research Institute of Experimental Physics). The bureau was faced with the task of developing the design of the first Soviet atomic bomb RDS-1.

August 29 1949 RDS-1 was successfully detonated at the Semipalatinsk test site (Training site No. 2 of the Ministry of the Armed Forces of the USSR). 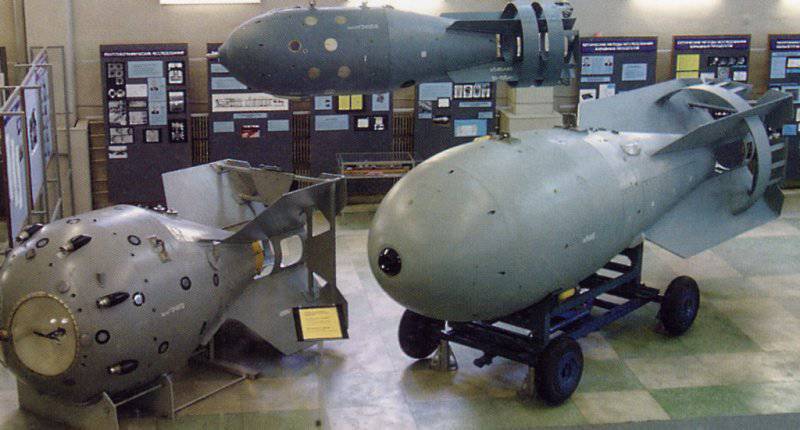 More than a year before, 15 June 1948, the head of the KB-11, Pavel Zernov, signed the “Order for the theoretical work”. It was addressed to the chief designer of KB-11 Julius Khariton and his closest assistants - physicists Kirill Shelkine and Jacob Zeldovich. Before 1 January 1949, they were ordered to carry out theoretical and experimental verification of data on the possibility of implementing the following RDS designs: RDS-3, RDS-4, RDS-5 and up to 1 June 1949 of the year on RDS-6.

In total, the Plan for research, development and testing of KB-11 for 1951 year included works on RDS-1 (already on serial products), RDS-1М, RDS-5 (4), RDS-2М, RDS -7, RDS-8 and RDS-6 and RDS-6. Not all of the claimed was brought to the late stages of development, not to mention the manufacture of an experimental product for field testing.

The presence in the documents of the two indices RDS-6 and RDS-6 was due to the fact that initially two fundamentally different thermonuclear physical schemes were worked out: the so-called Andrei Sakharov puff RDS-6 and the “pipe” of Yakov Zeldovich RDS-6. During the work, the second scheme disappeared and only the “puff” remained, which was successfully tested in August of the 1953 year.

Thermonuclear tests have been actively conducted in the United States. In America, newspaper and magazine hype was injected around the possibility of creating a superbomb. So, in the Science News Letter magazine Dr. Watson Davis 17 July 1948, published an article titled "Superbomb Possible."

1 November 1952 on the Marshall Islands in the Pacific Ocean, on Enywetok Atoll, a thermonuclear explosion of a huge physical facility using liquid deuterium - a heavy isotope of hydrogen. From here, by the way, the phrase “hydrogen bomb” went for a walk through the pages of newspapers.

8 March 1950 Deputy Director of the PGU Avraamy Zavenyagin writes to the head of KB-11 Pavel Zernov a letter immediately under the two vultures: “Top secret (special folder)” and “Store along with the cipher. Only personally.

In the letter, Zavenyagin suggests the following:

a) to 1 of May 1952 of the year to produce according to the principle proposed by comrade A. Sakharov, an RDS-6 product with a small multi-layer dressing on ordinary magnesium (thus coded in lithium in correspondence) with the addition of 5 conditional units of yttrium ) and in June 1952, conduct testing of this product to test and refine the theoretical and experimental foundations of the RDS-6с;

b) to the 1 of October 1952, to submit proposals on the design of the RDS-6С, its technical characteristics and the time of manufacture.

By the end of the summer of 1953, the first Soviet thermonuclear charge was ready for testing. Work has begun on the preparation of field experience at the test site number 2 (Semipalatinsk nuclear test site).

1953 year for KB-11 was planned very intense. In addition to testing the hydrogen bomb, it was necessary to provide three tests of new atomic bombs with their discharge from aircraft carriers. Work was underway on the ballistic case for the RDS-6с. The charge was not even made yet, and the first technical specifications for the equipment of the Tu-16 long-range bomber bomb compartment were already being prepared for the superbomb.

3 on April 1953 of the year, less than a month after Stalin’s death, new head of KB-11, Anatoly Alexandrov, together with Yuli Khariton, Kirill Schelkin and deputy chief designer Nikolai Dukhov signed a list of employees sent to test RDS-6с.

At the end of May, a reconnaissance reconnaissance team flew to the test site to ascertain the state of structures and buildings assigned to KB-11. It was necessary to check the sites where the test of the RDS-6s was planned, and the facilities that were built at the aerodrome of the landfill for assembly work with the products tested when they were dropped from the plane with detonation in the air.

When developing RDS-6s, designers and technologists had a lot of trouble associated with a number of new materials. The actual power of the charge depended on the solution of the problem, which on paper is determined only by the completeness of the calculations and the accuracy of the physical constants. Nevertheless, new technological problems were so important that 25 June 1953, Zavenyagin, Kurchatov, Alexandrov and Khariton in a detailed note addressed directly to Lavrenty Beria reported on the progress as if a member of the Politburo worked as a chief technologist. The note was about the details for the RDS-6с. No one in the atomic department, including Beria himself, knew that the very next day he would be humiliated, slandered, and soon shot, most likely before the RDS-6с passed the test.

26 June 1953, Beria signed a decree of the USSR Council of Ministers No. 8532-rs on the design assignment for the construction of the SU-3 plant (for uranium enrichment) at combine No. 813. On the same day, he was arrested, and at the July Plenum of the Central Committee 1953, he was struck out of the life of the country.

The first test of the Soviet thermonuclear weapons 12 took place on August 1953. A week earlier, the chairman of the USSR Council of Ministers, Georgy Malenkov, at an extraordinary session of the USSR Supreme Soviet, said that the United States is not a monopoly in the production of the hydrogen bomb.

On the day of Beria’s arrest, a Ministry of Medium Machine Building of the USSR was formed on the basis of the first, second, and third main departments of the USSR Council of Ministers. Vyacheslav Malyshev was appointed first minister, Boris Vannikov and Avraamy Zavenyagin were elected deputies.

Beria was preparing the reorganization, overnight such important matters are not being resolved. The lower layer of nuclear scientists found out about this restructuring later, stunned the news of Beria.

This is what David Fourman, the largest atomic designer of the USSR, recalled about these days. In the twentieth of June, he was among the employees of KB-11 flew to the landfill, the group stayed in Omsk and spent the night in an airport hotel. In the evening, David Abramovich, listening to a message about some solemn meeting in Moscow on the radio, drew attention to the fact that Beria was not mentioned in the enumeration of the party-state leadership. So Fishman fell asleep - the flight was scheduled for early morning.

At the landfill, everyone was immediately involved in the work, and after a fortnight the bell of the field telephone rang. At this moment, Fishman installed a lamp on the tower - in the place where the RDS-6 с center was supposed to be attached to the tower before the explosion. This illumination was used to set up optical equipment for measurements. Alexander Dmitrievich Zakharenkov called (later the chief designer of the new facility in the Urals, deputy minister of average machine-building of the USSR). He advised Fishman to come down from a height so as not to fall from the following news: Beria was arrested.

The news was really amazing, especially for the Commissioners. It was they, like the representatives of the Ministry of State Security and the Ministry of Internal Affairs, who oversaw regime and security issues. But even this news did not break the intense pace of preparation for the tests.

The political price of success or failure of the hydrogen explosion in 1953 was almost the same as the atomic explosion in 1949. As Andrei Sakharov wrote in his memoirs, "we were at the end of the line." More than it is, no longer worried.

12 August 1953 of the year. 7 hours 30 minutes local (in 4.30 Moscow time). The temperature of the luminous zone of the explosion determined by the method of a fiery ball significantly exceeded the solar one. A huge glow of red-orange color was visible from a distance of 170 kilometers. The size of the explosion cloud was 15 – 16 kilometers in height, and 15 – 17 kilometers in width. The total TNT equivalent was estimated at 400 kilotons.

20 August 1953, Pravda has published a government report on the testing of a hydrogen bomb in the Soviet Union. Sakharov and his colleagues felt triumphant.

Later, in the same dimensions, KB-11 developed a hydrogen charge for an aerial bomb, which received the designation RDS-27, which was successfully tested on November 6 1955 by bombing with Tu-16. The RDS-27 bomber was commissioned by the Air Force and became the first military thermonuclear ammunition. And the USSR finally constituted itself as a thermonuclear state.

Ctrl Enter
Noticed oshЫbku Highlight text and press. Ctrl + Enter
We are
Overbomb50 years ago, Nikita Khrushchev made a statement about the creation of a hydrogen bomb in the USSR
Military Reviewin Yandex News
Military Reviewin Google News
13 comments
Information
Dear reader, to leave comments on the publication, you must to register.