Qualitative re-equipment of the PLA with an almost unchanged number of military equipment is facilitated by the exceptionally high production capabilities of the Chinese military-industrial complex (MIC). The PRC is one of three countries in the world whose military industrial complex is capable of producing virtually the entire range of weapons and military equipment for both its own armed forces and for export. It was created with significant assistance from the USSR in 40 – 50-s of the twentieth century and for a long time functioned in the same technical condition and with the previous organizational structure.

During the period of economic transformation, the military industrial complex underwent a very significant evolution. At first, like the Soviet at the end of 80-x - the beginning of 90-x, it underwent a chaotic and unsystematic conversion, which only aggravated its technological gap. At the same time, due to the change in priorities of the country's leadership, the military-industrial complex lost its former privileged position, since the development of the civilian economy was the main thing. The situation began to change dramatically at the end of 90's. 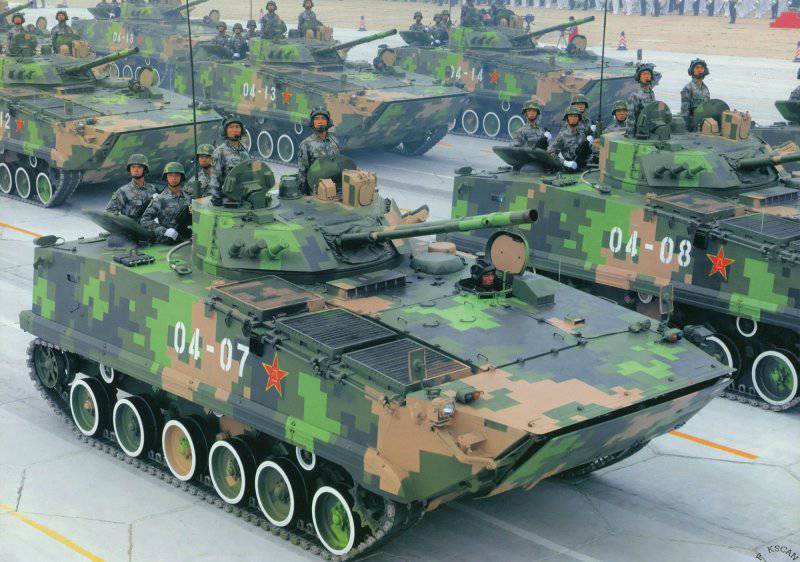 In 1998, under the direction of the State Council of the People's Republic of China, the State Committee of Defense Science, Technology and Defense Industry was established, having ministerial status (in 2008, it was transformed into the State Administration for Defense Science, Technology and Industry, subordinating to the Ministry of Industry and Information). Until 1998, this body with the same name was subordinate to the Central Military Council (CEM) and the State Council at the same time. The General Directorate of Armament appeared in the PLA.

Instead of the previous sectoral management system, in which the manufacturer of each weapon system was appointed administratively, and research institutes were separated from production, 11 military-industrial corporations were created: nuclear, nuclear construction, electronic, two rocket and space (production and technological), two aviation (now merged into one), shipbuilding and ground forces equipment, producing both military and civilian products. In addition, Xinshidai, a technology export and import company, was established. Moreover, each corporation includes narrow-profile corporations and unites dozens (sometimes even hundreds) of enterprises, research institutes, laboratories and other institutions.

Within corporations, science and production are combined, elements of competition have appeared, which has led to an increase in product quality. From 65 to 90 percent of the products of each corporation are for civil purposes, on the other hand, many military-industrial complex enterprises are not included in any of the corporations. Because of this, it is almost impossible to say exactly what the true size of the Chinese defense industry and the number of personnel are. The number of final assembly plants is about 400, the total is several thousand, the number of employees can be estimated at several million. There are 24 enterprises of the nuclear industry, 12 - final assembly of the rocket and space industry, nine final assembly aircraft plants, 14 plants for the production of armored vehicles (including three tank), 20 - for the assembly of artillery equipment, more than 200 - for ammunition, 23 large shipyards for 736 repair and construction sites.

During the years of reforms, the military-industrial complex of the PRC has acquired a qualitatively new level of development. He is able to produce a significant amount of military equipment, coming in first place in the world in the production of weapons and military equipment of all classes. More than 300 combat aircraft and helicopters, no less number of tanks, up to 30 submarines and surface combat ships and boats are produced annually. In the production of almost all classes and types of equipment, China today exceeds the capabilities of all NATO countries, and in some (particularly tanks) all countries of the world combined. If today the term “arms race” applies to some state, then it is China. At the same time, as mentioned above, weapons and military equipment make up only 10 – 35 percent of the total output of products by corporations. The production of a large number of civilian products (usually quite high-tech), including for export, makes all corporations profitable in peacetime.

A large number of enterprises of the military industrial complex and their wide geographic dispersion significantly increase its stability in the event of war. The existing duplication of enterprises by production profile may have a positive side. It can be said that the number of enterprises of the military industrial complex of the PRC is comparable to the number of ballistic and cruise missiles available in the arsenals of the US or Russian Armed Forces. The process of creating enterprises of the military-industrial complex in the depth of the country was resumed (they were previously built in 60 – 70-s, but then were abandoned due to the low technological level). This is explained both by the general state policy of the development of the western regions and by the desire to move some of the objects of the new economy away from the coast, where they are at risk of being hit by US naval and air-launched cruise missiles.

The Chinese military industrial complex has a number of problems. First of all - on engines, high-precision arms, various systems for network-centric warfare. However, this can by no means be considered a fundamental flaw negatively affecting the combat power of the PLA. So, Chinese engines differ from foreign ones only by a smaller resource, however this can be compensated by their number. Similarly, the lack of precision-guided ammunition is quite feuded by a mass of conventional ones. In general, it is becoming clear now that too much enthusiasm for expensive, high-precision ammunition, characteristic of the Western Armed Forces, turns out to be extremely unprofitable economically and often does not strengthen, but weakens their combat capabilities (ammunition is very quickly exhausted, after which it becomes impossible to fight expensive). From this point of view, the PLA lagging behind these munitions may not be a disadvantage, but an advantage, especially in relation to a large-scale classical war of the “army against the army” type. The Chinese military industrial complex is focused on preparing just for such a war, and in this respect it is most likely the best in the world. Its capabilities for the production of military equipment of all classes are even superior to those of the United States (with the exception of the construction of a submarine and aircraft carriers), significantly higher than Russian ones, and there is no basis for comparison with any other country.

The lack of quality of equipment in certain areas (and they are becoming less and less) will be fully compensated by its quantity, and the number of military-industrial complex enterprises guarantees uninterrupted supplies of equipment, weapons and consumables in the event of a war of any scale. At the same time, in no direction is the defense industry experiencing a critical dependence on foreign components and technologies.

The Chinese military industrial complex continues the policy of copying and synthesizing foreign technologies, including those obtained through illegal means. Virtually all foreign specimens in China are examined and replicated, and in the vast majority of cases illegal. At the same time, however, copying, as a rule, is accompanied by creative development and improvement, at least in some parameters. Moreover, the synthesis of Russian, Western and proprietary technologies is increasingly used when creating new types of technology. Such a synthesis of products from completely different scientific and technological schools requires a very powerful own school.

In the medium term

The technological gap in certain areas cannot be considered a serious problem for the military-industrial complex of the PRC. It can be compensated in at least three ways.

1. The development of its own technologies, which is very conducive to the rapid growth of Chinese science, which is at the forefront in the world.

2. Theft of foreign technology, which has long been well established.

3. Production of a large number of weapons, albeit slightly inferior in quality to the best foreign models. In this case, it is understood that a large quantitative superiority fully compensates for some qualitative lag.

Moreover, in many cases there is simply no qualitative lag. The article "China is ready for a big war" was told about the battles near Heglig, in which the 96 Tour tanks shot down four T-72 without any loss on their part. The 99 tour seems to be quite at the level of the T-90 or M1A2. J-11B is certainly no worse than Su-27 or F-15C. The outcome of the battle between Chinese and Russian, or Western tanks or airplanes is now no longer determined by the quality (for it is about the same), but by the number, crew training and tactical situation.

Apparently, in the development of the military-industrial complex, China will largely follow the Soviet path. It may be recalled that at the beginning of the 20 of the twentieth century the technological level of the Soviet "defense" and science was close to zero. For a long time, the USSR was completely dependent on foreign designs and technologies. Nevertheless, by the 60 – 70 years of the twentieth century, the military-industrial complex and the corresponding science in the USSR reached a very high level comparable to the level of the United States and significantly exceeding those of other countries. In part, despite the many financial, organizational, scientific, technological and personnel problems of the last 20 years, this level is still maintained. There is practically no doubt that the military-industrial complex of China will be able to repeat this path, and even more successfully, since, unlike the USSR, it combines command-and-control and market methods and has the possibility of borrowing more foreign technologies. Only serious internal shocks can prevent this. If they do not happen, through the 15 – 20 years, the PLA will become the strongest army in the world in almost all parameters. The United States and less likely to Russia can only counter its advantage by creating weapons on new physical principles, which, however, is an extremely difficult task. Moreover, China will also try to solve this problem and may well achieve a positive result.

The achievement of such success was promoted by the general economic and scientific-technical policy of the PRC leadership. It did not succumb to the Western myth, which turned into a grandiose self-deception, about a post-industrial society in which information is more important than production. Indeed, these technologies multiply the efficiency of everything, but they do not replace anything. It is impossible to eat information, dress in information, live in information, ride on information, fight information. Believing in its own myth, the West took up its own deindustrialization, transferring industrial production to third world countries, mainly to China, which has become a world factory, and now everyone depends on it. Even the fact that most directly embodies the information society - computers, peripherals, communication systems, also produced in China.

This applies, in particular, to the military sphere. The concept of network-centric warfare is definitely revolutionary. But they still fight not with computers, but with armored vehicles, artillery, aviation, fleet. If at the ends of the network there are no platforms (tanks, planes, ships), then the network is useless. And no network will defeat more targets than there is ammunition on the platforms.

In China, they understood quite correctly that quantity does not cancel or replace quality, the network does not replace carriers. Therefore, under the slogan of combining informatization and mechanization, the Chinese are introducing information technologies into the traditional army without reducing the latter and replacing the old equipment with the new one-to-one. Huge MIC provides them with these opportunities.