Takeoff from the tail - an experimental fighter LOCKHEED XFV-1 SALMON

August 14 2013
13
The concept of aircraft capable of vertically take off and land on the tail, in stories world aviation became short-lived, but at the same time a vivid episode. Most of the prototypes and prototypes of VTOL aircraft (decoding and translation of the abbreviation - "vertical take-off and landing", such aircraft were also called "tailsitter" - "landing on the tail") were created in the late 1940 - early 1950s. The vast majority of aircraft were intended for the needs of the military. 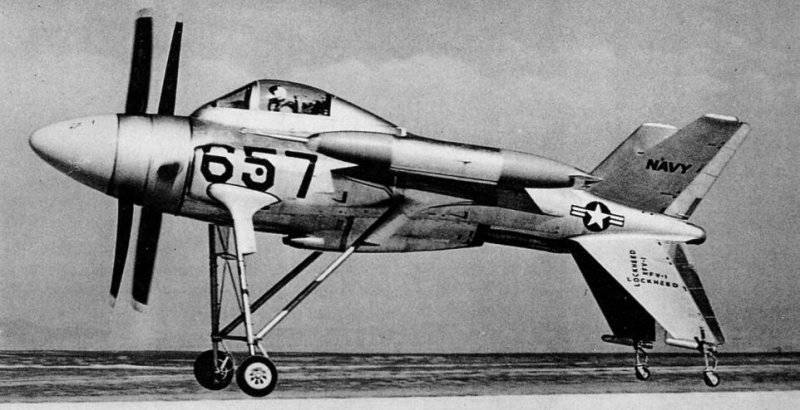 The main prerequisite for the emergence and further development of this concept was the desire of the military to abandon the runway, the construction of which during military operations increased the running costs and meant the loss of time advantage.

The historical background of the VTOL concept was the events of World War II. The German company Focke Wulf in 1944 submitted to the German leadership a draft of the Triebflügeljäger aircraft. This fantastic car took off vertically and landed on its tail. On the one hand, the leadership of the Third Reich from the very beginning of the war initiated a large-scale search for new solutions in military equipment. On the other hand, at the final stage of the war, Hitler’s aviation suffered huge losses under the onslaught of the Allied army - very often fighters and attack aircraft simply fell under bombardments without having time to take off. Aircraft with vertical take-off could solve several problems at once: abandon the time-consuming and expensive runway construction; disband some existing airfields, thereby disorienting the enemy; move basing platforms to weapons factories, thus reducing the logistics cycle. The concept had many positive aspects, but one “but” brought everything to naught - the strategic advantage and time were lost, so the Germans were not able to create not only a production model, but also the Triebflügeljäger prototype.

Despite this, German developments and technologies were not lost: after the completion of the Second World War, many Reich engineers were taken to the United States as a strategic and intellectual trophy. In exchange for life, personal security and freedom, they were offered to share the developments of the German military industry with the US military. The fascist threat passed, but the Americans had their interest in Europe. In addition, a more serious enemy has emerged - the threat of the spread of the socialist system and Soviet influence throughout Western Europe. In this regard, the secret development in the field of creating vertical take-off aircraft continued. As a result, several different aircraft were created. 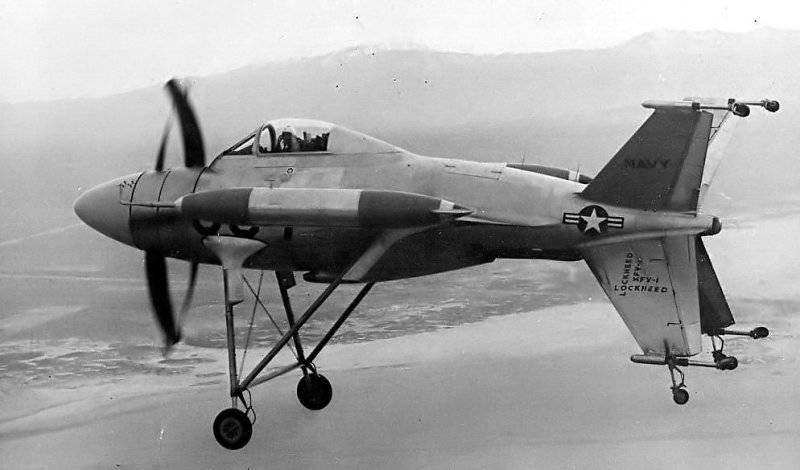 In 1947, the US Navy and Air Force, starting from an aircraft project patented by Professor Heinrich Focke (Heinrich Fock) in 1939, began research on the VTOL. The first in this area was the project "Hummingbird" ("Hummingbird"). The greatest interest in the VTOL aircraft was shown by the Navy, not only the options for taking off such vehicles from the deck of the ship, but also launches from submarines were considered.

In 1950, Lockheed and Convair are making proposals for a vertical take-off aircraft project. The most interesting thing is that both developers in the footsteps of Heinrich Fock did not go. It should be noted that in the first projects the VTOL-concept was perceived as something extremely literally, that is, the planes were in an upright position (they were standing on the tail) before takeoff, after climbing, they went into a horizontal position, and again landed on the tail.

Both companies have signed a contract with the military. The 10 million contract provided for the creation of two experimental fighter jets, which were eventually presented. The Lockheed aircraft was originally called XFO-1 (Model 081-40-01). Two samples wore No. 138657 and 138658. Subsequently, Lockheed changed its designation to XFV-1 Salmon (“Salmon,” the nickname was given in honor of the head of the engineering group, test pilot Herman Salmon). Presented Convair car called XFY-1 Pogo.

The Lockheed XFV-1 Salmon and the VTOL XFY-1 power units were the same, but the first one was significantly different in layout, having X-shaped tail and a straight wing. The Lockheed XFV-1 Salmon experimental fighter, when parked, had a vertical fuselage position (as did the VTOL XFY-1 Pogo), based on non-retractable landing gear. It should be immediately noted that the vertical take-off and landing on the XFV-1 were not committed. At the initial stage of flight tests, the car was equipped with auxiliary landing gear supports, which made it possible to take off with a takeoff run and landing with run. The construction of the first experimental model of the Lockheed XFV-1 Salmon completed 23 February 1953 of the year, and the first flight (takeoff with the help of auxiliary chassis) test pilot Herman Salmon made 16 July 1954 of the year. 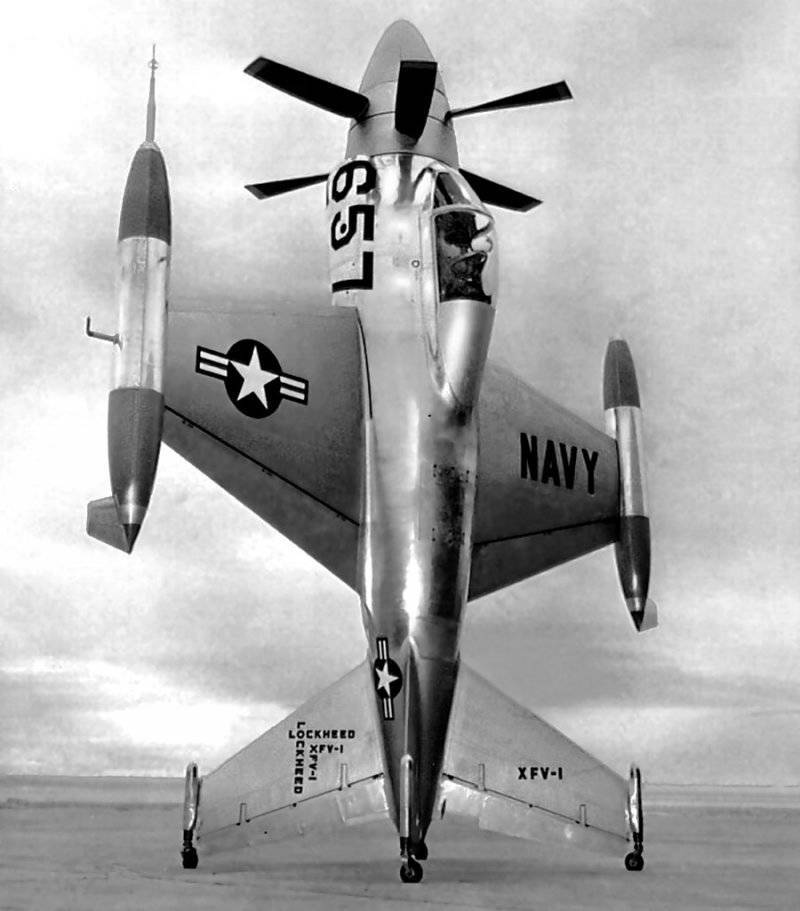 The XFV-1 Salmon was a mid-plane with a single turboprop engine with coaxial propellers, tail assembly consisting of identical cruciform surfaces, each of which was equipped with a shock-absorbing strut and self-orienting wheel.

The fuselage is a small extension (11,22 meter), with a protruding cockpit lantern. The pilot's seat could deviate 45 degrees. The Allison YT40-A-6 turboprop engine consisting of two coupled T38 turbines and having horsepower 5850 power rotated a pair of three-bladed Curtiss-Wright "Turbo-electric" propellers (each with a diameter of 4,88 meter). According to calculations, the maximum speed of Salmon should have been 933 kilometers per hour, and cruise speed - 659. The wing was straight, having a trapezoidal shape in terms of, with a small relative thickness of the profile, did not have mechanization. At the ends of the wing was supposed to install additional fuel tanks or containers with weapons. The X-shaped, swept tail was equipped with aerodynamic control surfaces and trimmers, which were supposed to provide control in all flight modes. The chassis is non-retractable, four-bearing, with small wheels and shock-absorbing struts in the fairing. Forty 70-millimeter rockets or four 20-millimeter cannons placed at the ends of the wings were supposed to be used as weapons. For the transportation and maintenance of the aircraft, a special trolley was developed, which ensured a change in the position of the fuselage from a vertical to a horizontal position. The cart was supplemented with step-ladders for access to the cabin.

Ground tests began in December 1953. The first test flight on the XFV-1 Salmon test driver Herman "Fish" Salmon made the 16 June 1954 of the year. It was assumed that the fighter will be able to vertically take off from the tail and land on it. During the initial testing of the mechanization of the first XFV-1, engineers found that the installed engine, even at maximum power, would not be able to lift the machine vertically. That is why the car has been installed additional chassis for take-off and landing with run, to study the abilities of the XFV-1 Salmon. 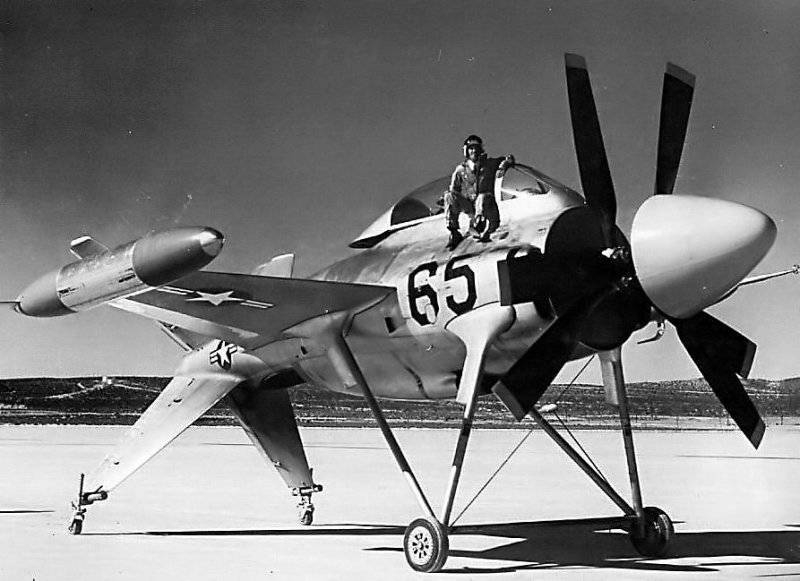 During the first flight, the test pilot had to first test the engine on the ground, then run, but Herman Salmon gave too much gas during his runs and the plane took off involuntarily. The car climbed to a height of 6 meters and reached 287 speed km / h. After reducing the gas, the XFV-1 Salmon lightly touched the ground at 130 km / h. 17 March 1954 in the press there were reports about this device, but silent about unauthorized flight.

For 6 months, the machine remained chained to the ground, and only after that the tests continued. Salmon lifted the plane off the ground at a speed of 220 km / h and began to gradually climb. After that, the pilot began to figure out the speed of stalling: the car began to spin into a corkscrew at 96 km per hour, but after accelerating, it left it.

During the following year, an 32 flight was made, the total flight time was about 23 hours. Salmon made the transition between horizontal and vertical flights and back. For security reasons, all this was done at a considerable height. To do this, the pilot took the car to the candle, and then tested it in this position. Because of the insufficient power of the XFV-1, the Salmon could not even hang, the plane in an upright position began to decline with ever increasing speed. Naturally, there was no question of any vertical takeoff or landing.

A further development of the VTOL was to be the XFV-2 fighter equipped with an HP 7100 engine. However, as often happened at that time, the engine was not built.

In June, 1955, the development of the Lockheed XFV-1 Salmon VTOL series was discontinued. The main reasons for the curtailment of the program called the complexity of managing the aircraft and the discrepancy between its characteristics calculated. At the same time, the Convair XFY-1 Pogo project was closed. On an experimental XFY-1, make 280 flights in a hangar on a leash, in 1954, one free flight with a transition to a horizontal position. After the cancellation of the program, prototypes were transferred to aerospace museums. 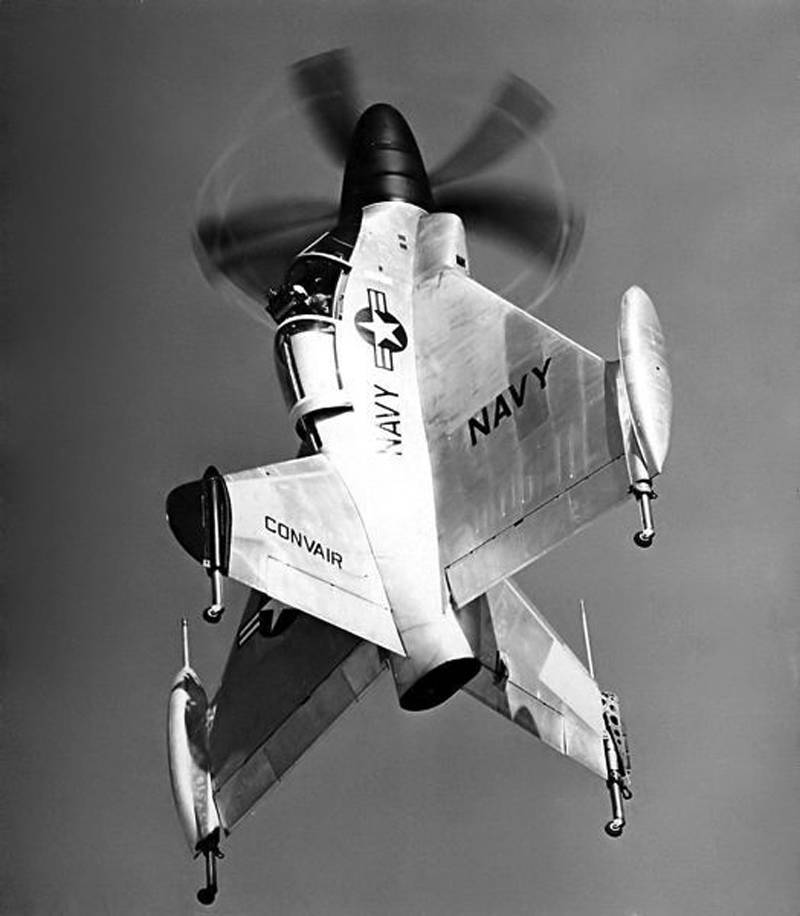 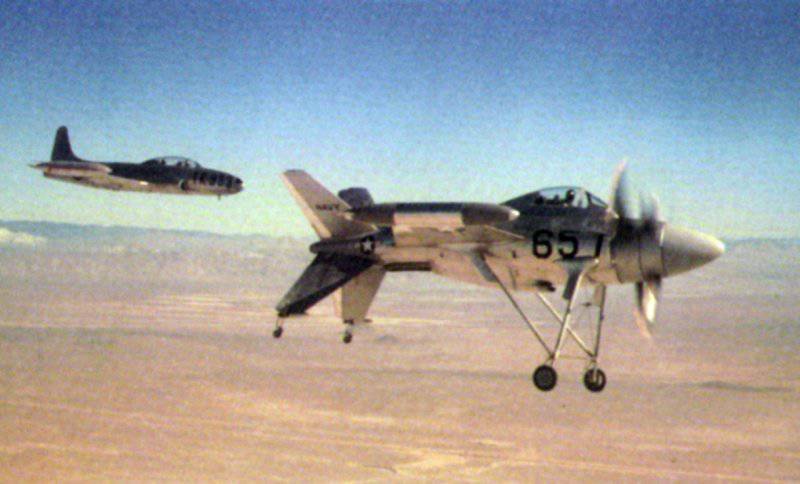 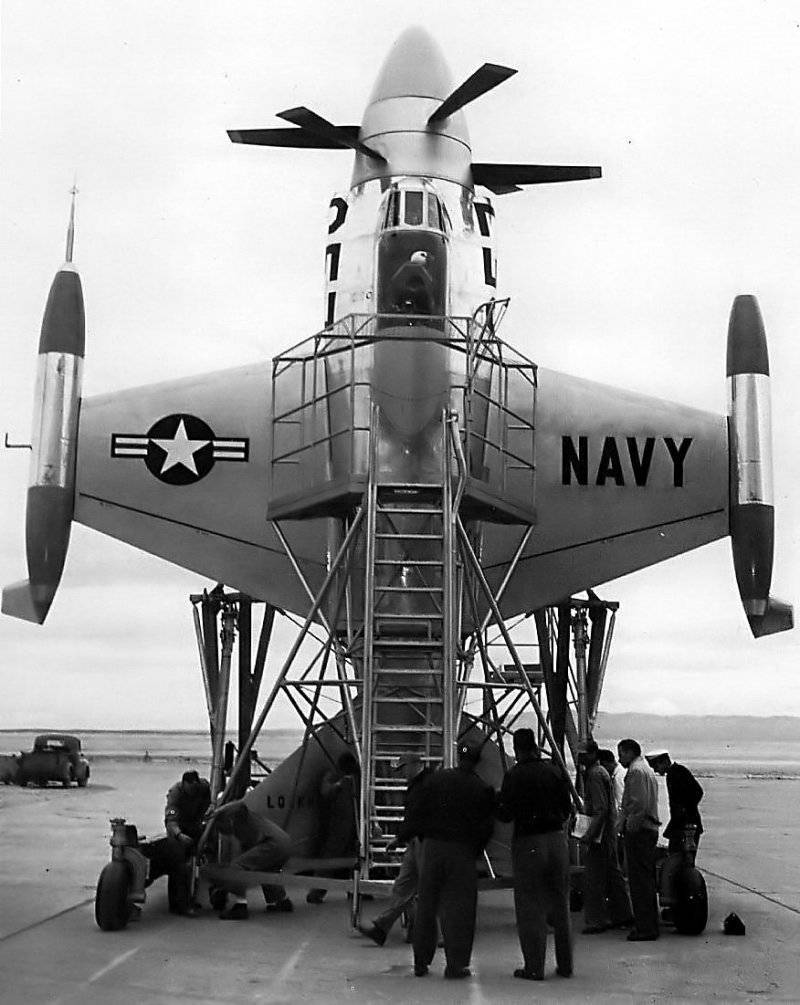 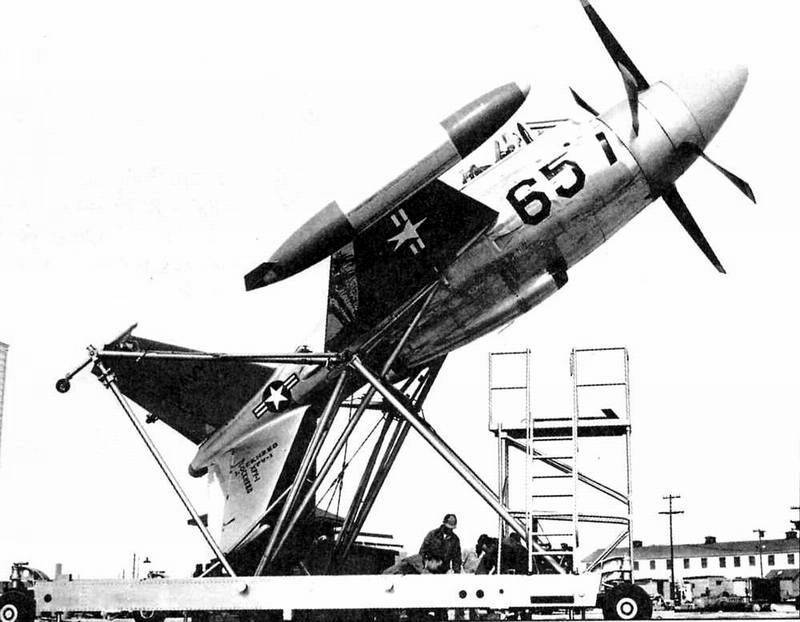 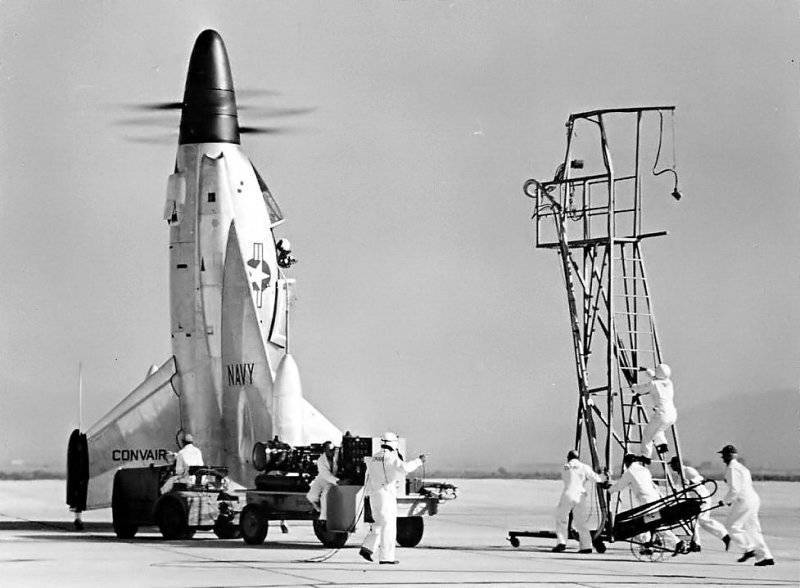 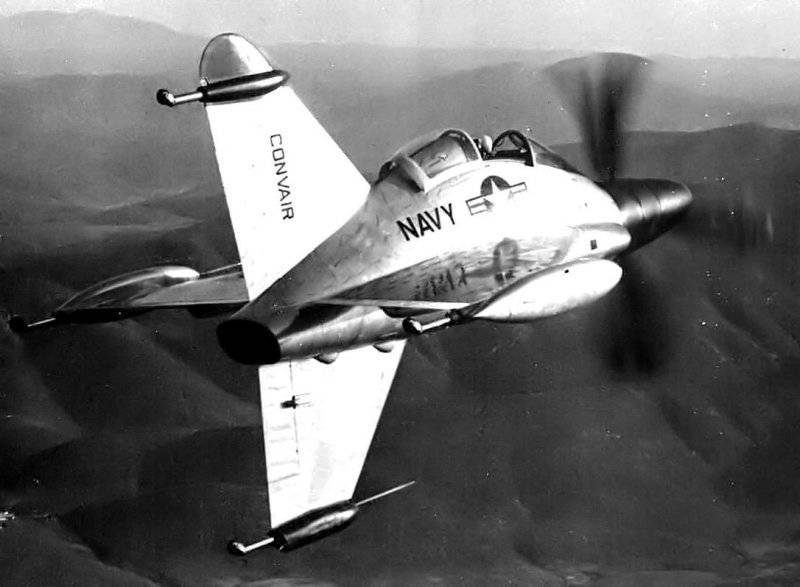 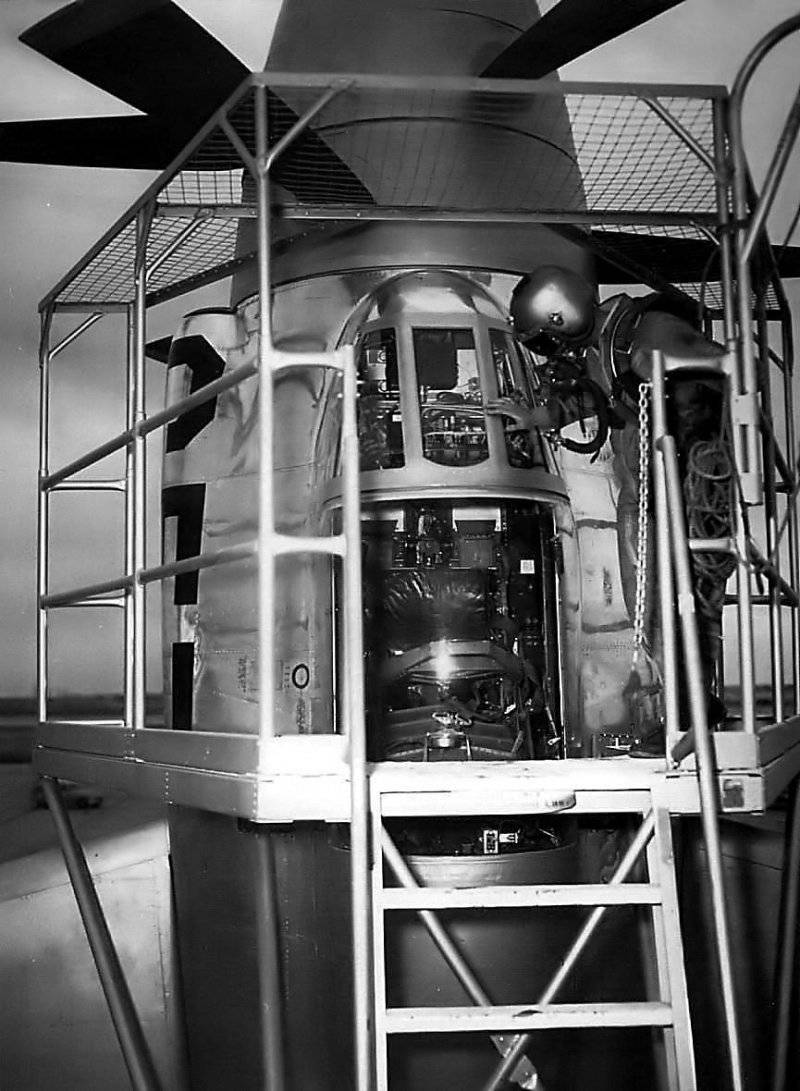 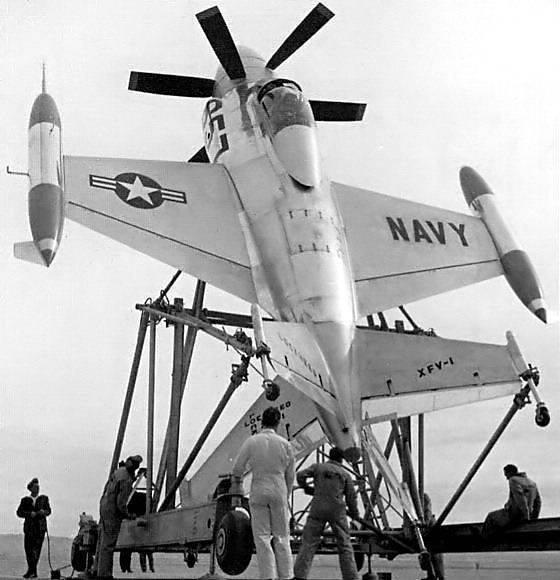 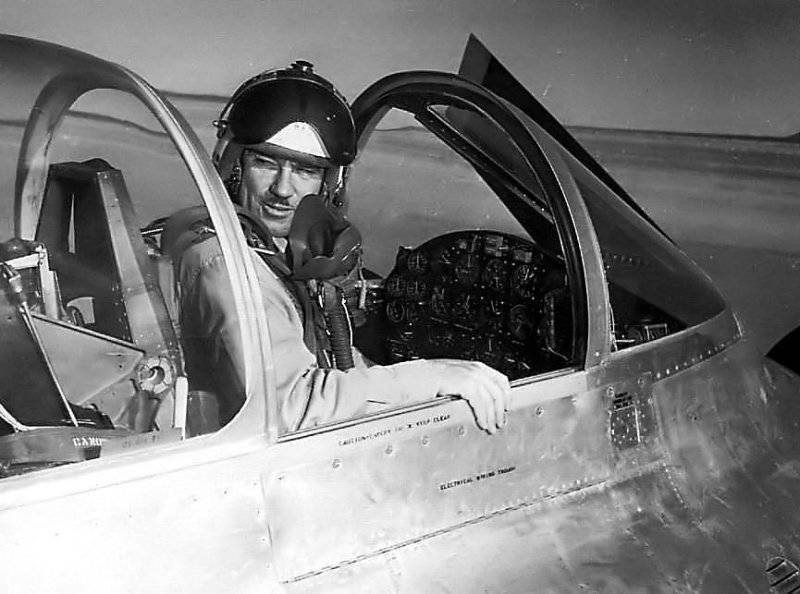 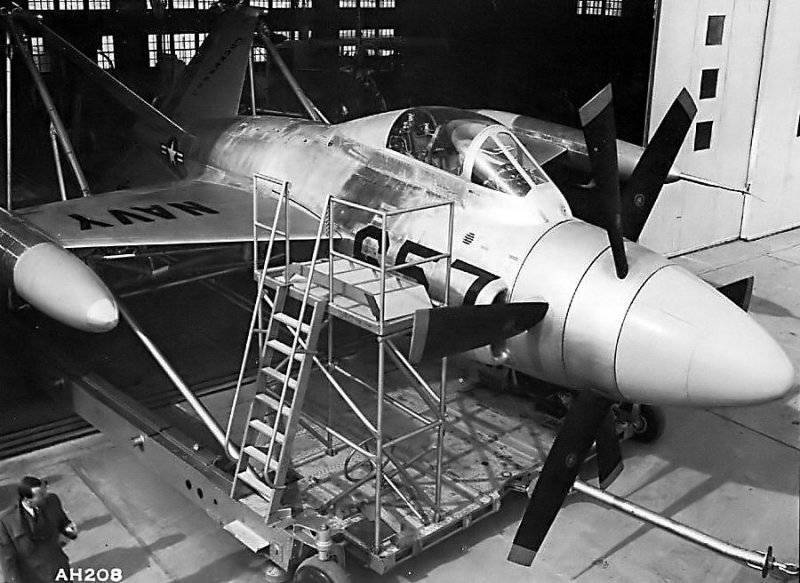 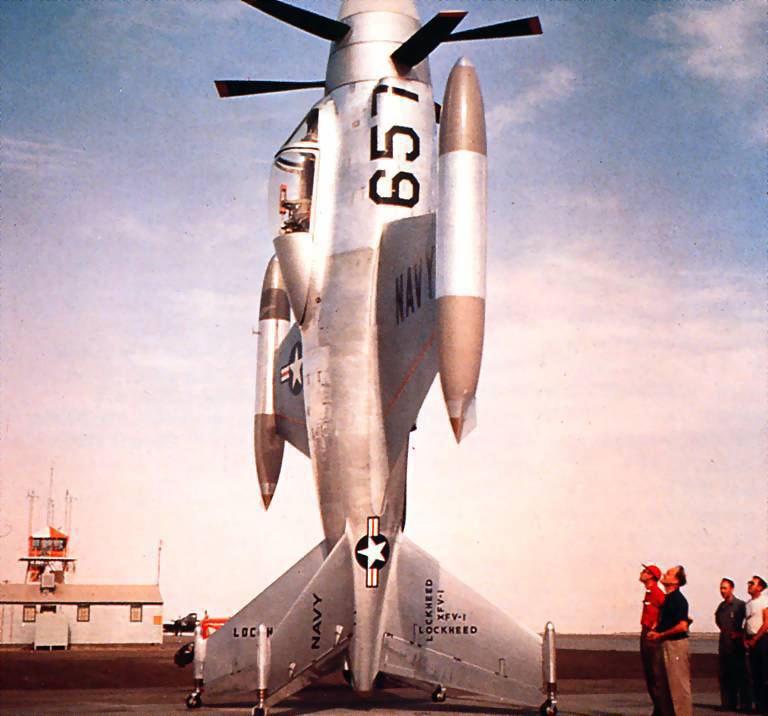 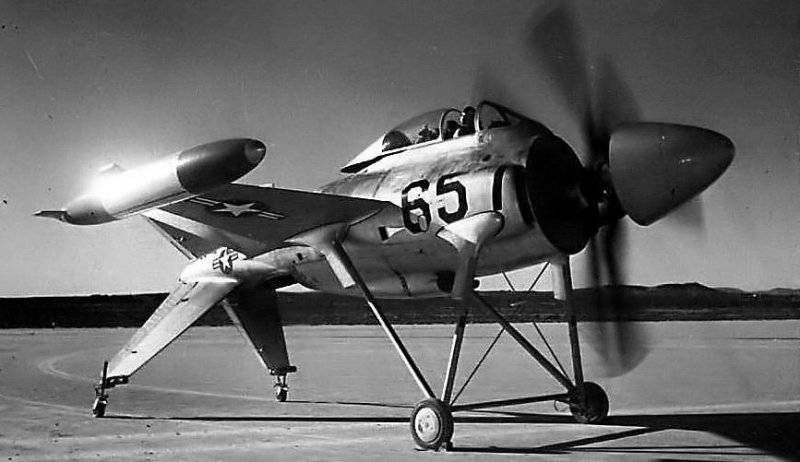 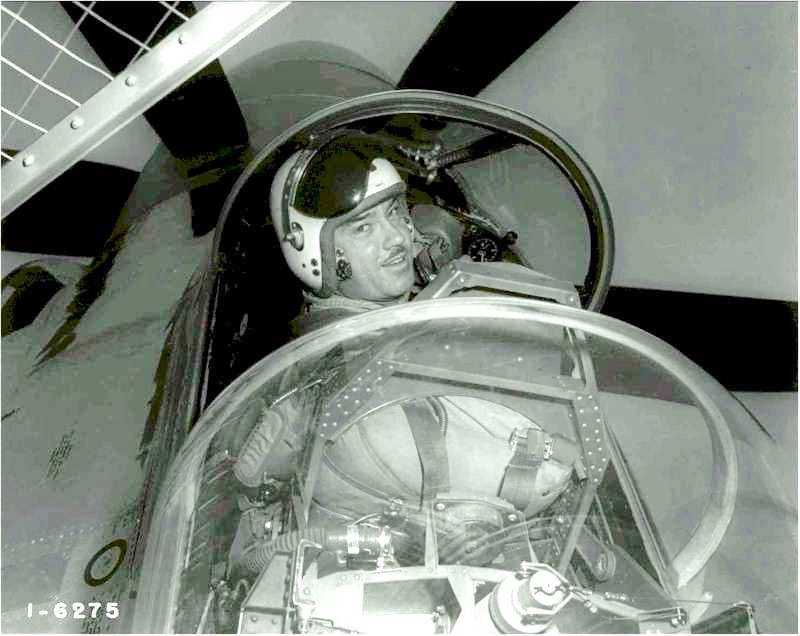 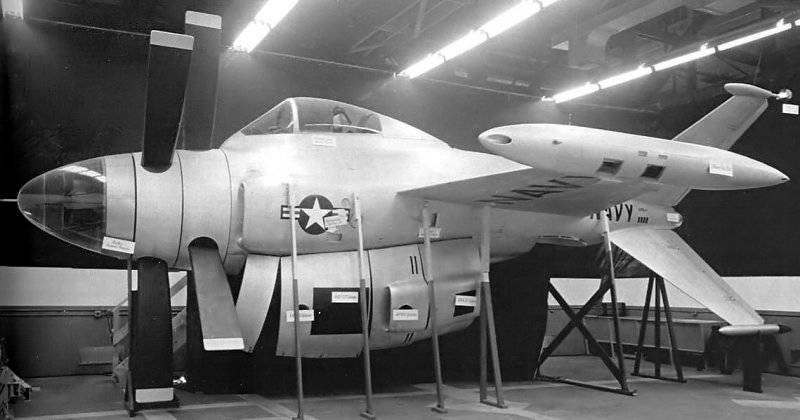 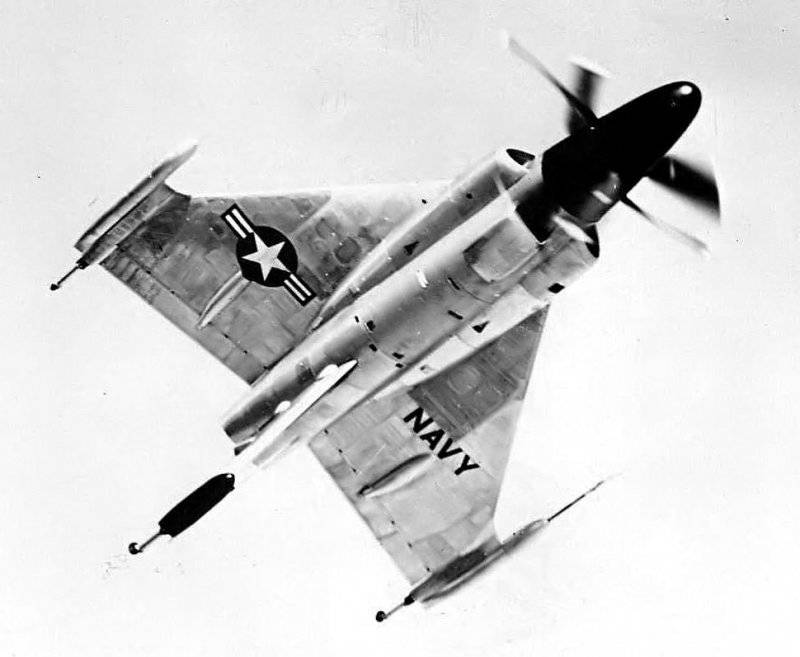