Tank biathlon: sport, training and prestige of the army

August 14 2013
58
Among the events of recent months that took place in the Russian armed forces, a great method of checking the level of training of tankers attracted a lot of public attention and specialists. So-called tank biathlon, despite its simplicity, proved to be a very convenient means of training and testing the skills of soldiers. As part of the competition, tankers of various units are given the opportunity to go to the training ground and practice driving an armored vehicle and firing from its standard weapons. 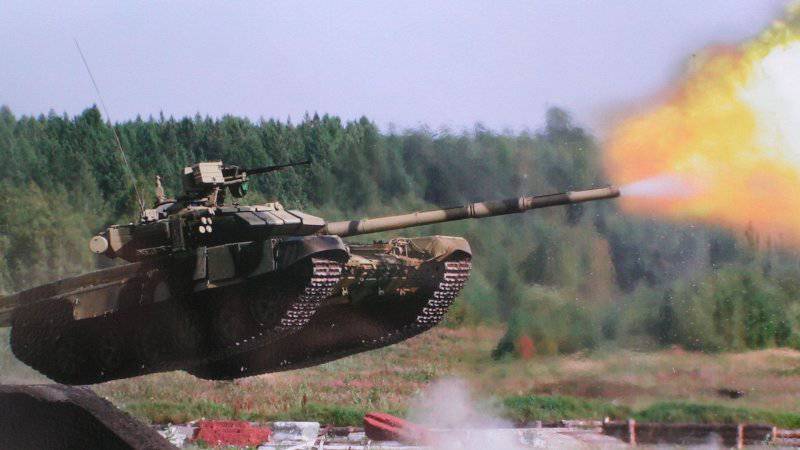 The word "biathlon" in the name of a new type of testing the skills of tankers appeared for the reason that, fulfilling the task, they must pass the track and hit the target - all as in the same winter sport. Naturally, the conditions of tank biathlon are fully consistent with the features of the military equipment used in it.

The route passes over rough terrain and its length, depending on the size of a particular landfill, ranges from 6 to 10 kilometers. After each of the three laps, tankers go to the firing line. All competitions involve three shooting. During the first, the tank must hit three targets from the main cannon that imitate the enemy’s armored vehicles. The distance to these goals - 1500 meters and more. After the next trip around the test site, the tankers return to the firing position, from which they must hit new targets. Now, at a distance of about 600-700 meters from the tank, there are targets imitating the calculation of an anti-tank grenade launcher and several infantrymen. These targets must be hit with a machine gun paired with a cannon. After the third lap on the track, tankers fire from the NSV anti-aircraft machine gun at targets imitating the calculation of anti-tank systems and anti-tank guns. After the third firing line, the tank must pass an obstacle course, bypassing various objects and crossing ditches and unevenness of the route. For non-compliance with any conditions of the competition the crew receives a penalty. For each unaffected target, tankers will have to overcome the extra 500 meters of the track, and for each obstacle in the last section they will receive additional 10 seconds to the total time.

Despite the competitive nature, tank biathlon is an interesting and original way to test the skills of tankers in conditions close to real. The main advantage of checks using this method is the combination of several tasks, which are usually worked out separately. In other words, instead of individual trips along the tank route and separate firing on the range (between working on these tasks, days and weeks may pass), tankers have the opportunity to work out several crucial skills during one event. During the entire race on the tank biathlon route, the crew of the combat vehicle must do its job smoothly. Consider the problem of "biathlon" in more detail.

Most of the time the tank participating in the competition, conducts on the track. Since you have to drive over rough terrain, the driver has to constantly monitor the track and correctly control his armored vehicle. Mobility is one of the main features of a modern tank; working in the conditions of the landfill, the driver improves his skills and increases the chances of the tank to perform tasks in a real battle.

The second part of the tank biathlon - target shooting - was also created taking into account the real threats on the battlefield. Being in a firing position, tankers must find and hit targets imitating armored vehicles, artillery, anti-tank missile systems and grenade launchers, as well as enemy infantry. All these goals can meet tankers in battle. The ability to quickly detect and destroy them will allow you to complete tasks. Moreover, direct fire at various targets is the main method of tank work and, by participating in biathlon, crews improve one of their most important skills. The use of almost all available on the armored vehicle weapons It also has a beneficial effect on the skills of tankers, since in real conditions it is not always possible to destroy targets with just one cannon or machine gun.

Finally, the competitive spirit of tank biathlon helps crews seeking to reduce their total time and win, learn to work smoothly and without mistakes. As a result, the overall effectiveness of training tankers, in comparison with the usual "separate" methods, increases significantly. Probably in the near future, tank biathlon will be widely distributed among the troops and will take its place in the system of training tankers.

Shortly after the first such events, various proposals began to appear concerning their future. For example, it is proposed not only to hold competitions between different tank units, but also to do this as part of a new television program. With her help, it is alleged, it will be possible to increase the prestige of military service. Also a few weeks ago it became known that the Mongolian military could adopt the know-how of their Russian colleagues. After watching the tank biathlon at the Chebarkul training ground (Chelyabinsk region), the Mongolian officers expressed their intention to think about the possibility of using the Russian experience in training their soldiers.

Thus, just a few months after the first reports about him, tank biathlon began to go international. Moreover, in the near future, it may become not just a competitive practice adopted in several countries, but also a full-fledged international competition. A few days ago it became known that the US military accepted an invitation to participate in Russian competitions of tankers. Russian Defense Minister S. Shoigu recently invited American tankers to take part in a tank biathlon on Russian highways, and they agreed to join the new “sport”. In addition to the Americans, the military of other countries also expressed their consent.

Such a variant of tank biathlon, with the participation of foreign tankers, will certainly attract the attention of the general public and accordingly affect the prestige of the armed forces. In addition, competitions with the participation of Russian and American tankers on armored vehicles of Russia and the United States will help to remove some of the issues that have long been the cause of numerous disputes. Probably, instead of some reasons for disputes, others will appear, but this time the tanks and crews of the two countries will clearly demonstrate their skills and abilities while competing with each other. Also, do not forget the fact that any such event will become a kind of advertisement for armored vehicles.

In the end, it turns out that a new original idea, the purpose of which is primarily to improve the skills of tank servicemen, is able to favorably affect not only the level of training of fighters, but also other equally important aspects of the armed forces and the defense industry. For example, already on August 17, Russian tankers will be able to show their skills and abilities by competing with their colleagues from other countries. A biathlon with the participation of tankers from Russia, Armenia, Belarus and Kazakhstan will be held at the training ground in Alabino near Moscow. It remains to wish good luck to the Russian crews. Let them defend the honor of the Russian army and show what our tank forces are capable of.