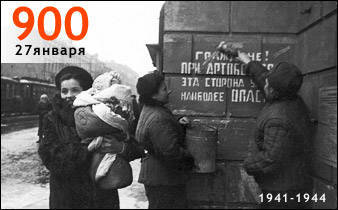 In 1941, Hitler launched military operations on the outskirts of Leningrad, in order to completely destroy the city. September 8 1941 has a ring around an important strategic and political center. 18 January 1943, the blockade was broken, and the city appeared a corridor of land communication with the country. 27 January 1944, the Soviet troops completely lifted the fascist blockade of the city, which lasted 900 days.

As a result of the victories of the Soviet Armed Forces in the battles of Stalingrad and Kursk, near Smolensk, on Left-Bank Ukraine, in the Donbas and on the Dnieper at the end of 1943 - the beginning of 1944, favorable conditions were created for a major offensive operation near Leningrad and Novgorod.

By the beginning of 1944, the enemy created a defense in depth with reinforced concrete and wood-earth structures, covered by minefields and wire fences. The Soviet command organized an offensive by forces of the 2nd shock, 42nd and 67th armies of the Leningrad, 59th, 8th and 54th armies of Volkhovsky, the 1st shock and 22nd armies of the 2nd Baltic fronts and Baltic Red Banner fleet. The far aviation, partisan detachments and brigades.

The aim of the operation was to crush the flank groupings of the 18 Army, and then with actions on the Kingisepp and Luga directions to complete the rout of its main forces and reach the line of the Luga River. In the future, acting on the Narva, Pskov and Idritsky directions, defeat the 16 Army, complete the liberation of the Leningrad Region and create conditions for the liberation of the Baltic states.

To celebrate the final lifting of the 27 blockade on January 1944 in Leningrad was given a holiday salute. 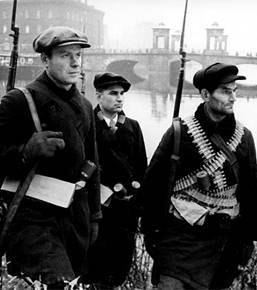 In the evening of January 27, 1944, a festive salute roared over Leningrad. The armies of the Leningrad, Volkhov and 2 of the Baltic fronts rejected the German troops from the city, liberated almost the entire Leningrad region.

The blockade, in the iron ring of which the long 900 days and nights Leningrad was choking, was put an end. That day was one of the happiest in the lives of hundreds of thousands of Leningrad; one of the happiest — and, at the same time, one of the most mournful — because everyone who lived before this holiday day lost either relatives or friends during the blockade. More than 600, thousands of people died in starvation in a city surrounded by German troops, several hundred thousand in an area occupied by the Nazis.

Exactly one year later, on January 27 of 1945, the 28 Infantry Corps 60 Army 1 of the Ukrainian Front liberated the Auschwitz concentration camp, an ominous Nazi death factory, which destroyed about one and a half million people. the Jews. Soviet soldiers managed to save a few - seven and a half thousand exhausted, similar to living skeletons of people. All the rest - those who could walk - the Nazis managed to steal. Many of the liberated prisoners of Auschwitz could not even smile; their strength was only enough to stand.

At first glance, such a statement may seem erroneous. The term “holocaust”, which has taken root in Russia with some difficulty, means the Nazi policy aimed at exterminating the Jews. The practice of this destruction could be different. Jews were brutally murdered during the pogroms conducted by the Baltic and Ukrainian nationalists, shot at Babyn Yar and the Minsk Pit, vymarivali in numerous ghettos, destroyed on an industrial scale in numerous death camps - Treblinka, Buchenwald, Auschwitz.

The Nazis sought to "final solution of the Jewish question," to the destruction of the Jews as a nation. This incredible crime was prevented by the victories of the Red Army; however, even a partial incarnation of the Nazi plan of murder led to truly horrific results. The Nazis and their accomplices killed about six million Jews, about half of whom were Soviet citizens.

The Holocaust is an undoubted crime, a symbol of the Nazi genocidal policy towards “racially inferior” peoples. The crime of the blockade of Leningrad in the eyes of many, both in the West and in our country, does not look so obvious. Very often we hear that this is certainly a huge tragedy, but war is always cruel to the civilian population. Moreover, allegations are being heard that the Soviet leadership, who did not wish to surrender the city, was allegedly guilty of the horrors of the blockade, thereby saving the lives of hundreds of thousands of people. 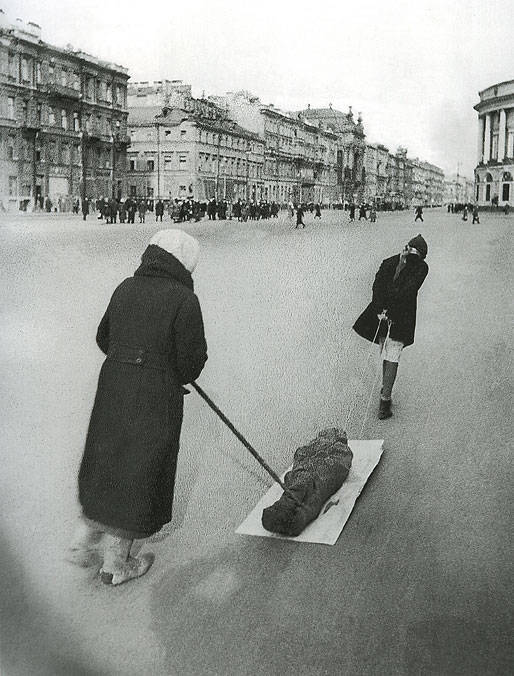 However, in fact, the destruction by blockade of the civilian population of Leningrad was originally planned by the Nazis. Already 8 July 1941, on the seventeenth day of the war, in the diary of the Chief of the German General Staff, General Franz Halder, appeared a very distinctive entry:

“... The Fuhrer’s decision is unshakable to raze Moscow and Leningrad to the ground in order to completely get rid of the population of these cities, which otherwise we will then have to feed during the winter. The task of destroying these cities should be performed by aviation. Do not use for this. Tanks. It will be “a national disaster that will deprive the centers not only of Bolshevism, but of Muscovites (Russians) in general.”

Hitler’s plans were soon embodied in the official directives of the German command. 28 August 1941, General Halder signed an order from the Wehrmacht Land Forces High Command to Army Group North to blockade Leningrad:

"... on the basis of directives of the Supreme High Command, I order:

1. Block the city of Leningrad with a ring as close as possible to the city itself in order to save our strength. Requirements for surrender not to push.

2. In order for the city, as the last center of red resistance in the Baltic, to be destroyed as quickly as possible without much sacrifice on our part, it is forbidden to storm the city with infantry forces. After the defeat of the air defense system and enemy fighter aircraft, its defensive and vital capabilities should be broken by destroying waterworks, warehouses, power supplies and power plants. Military installations and the ability of the enemy to defend need to suppress fires and artillery fire. Every attempt by the population to go out through the encirclement should be prevented, if necessary with the use of weapons... "

As we see, according to the directives of the German command, the blockade was directed precisely against the civilian population of Leningrad. Neither the city nor its inhabitants were needed by the Nazis. The rage of the Nazis in relation to Leningrad was terrifying.

“The poisonous nest Petersburg, from which the poison into the Baltic Sea is keyed, must disappear from the face of the earth,” said Hitler in a talk with the German ambassador in Paris in September 16 on September 1941. - The city is already blocked; now it remains only to bombard it with artillery and bomb until the water supply system, energy centers and everything that is necessary for the vital activity of the population will not be destroyed. ” 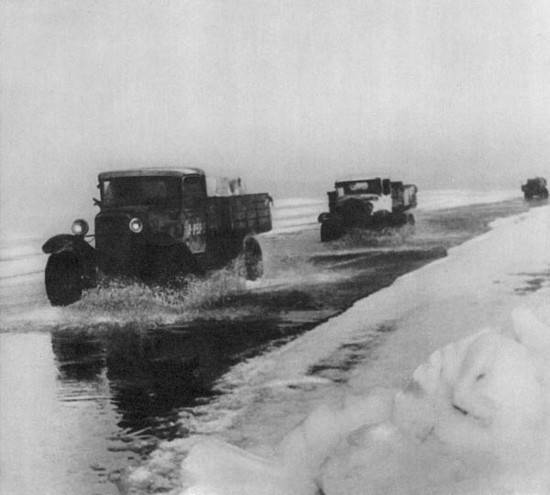 A week and a half later, September 29 1941, these plans were recorded in the directive of the Chief of Staff of the German Navy:

“The Fuhrer decided to wipe the city of Petersburg from the face of the earth. After the defeat of Soviet Russia, the continued existence of this largest settlement is of no interest .... It is supposed to surround the city with a tight ring and by fire from artillery of all calibers and continuous bombardment from the air to level it with the ground. If, as a result of the situation created in the city, requests for surrender are made, they will be rejected, since the problems associated with staying in the city of the population and its food supply cannot and should not be solved by us. In this war, waged for the right to existence, we are not interested in saving at least part of the population. ”

A characteristic commentary on these plans was given to Heydrich in a letter to SS Reichsführer Himmler of 20 in October 1941 d. “I would like to humbly pay attention to the fact that clear instructions regarding the cities of Petersburg and Moscow cannot be implemented in reality if they are not initially executed with all the cruelty. "

A little later, at a meeting at the headquarters of the Supreme Command of the Ground Forces, the result of the Nazi plans for Leningrad and its inhabitants was summed up by the quartermaster general Wagner: "There is no doubt that it is Leningrad that should die a death by starvation."

“December 24. Frosts are unbearable. People are dying of hunger in their beds already hundreds per day. In Tsarskoye Selo, about a thousand 25 remained for the arrival of the Germans. Thousands of 5 - 6 was dispersed to the rear and in the nearest villages, two thousand - two and a half thousand were knocked out by shells, and according to the last census of the Council, which was held the other day, eight thousand something remained. Everything else is extinct. It is absolutely not surprising when you hear that one or another of our friends has died ...

27 December. Carriages drive through the streets and collect the dead. They are put in the air gap. They say that the whole road to Gatchina on both sides is packed with corpses. These unfortunates collected their last one-of-a-kind and went to exchange for food. On the way, who of them sat down to rest, he no longer stood up ... Distraught from starvation, old people from the house of disabled people wrote a formal request to the commander of the military forces of our area and sent it to him in some ways. And it read: “we ask permission to eat the old people who died in our house”.

The Nazis deliberately condemned hundreds of thousands of people to starvation both in the blocked Leningrad and in the Leningrad Region occupied by them. So the blockade and the Holocaust are really phenomena of the same order, undoubted crimes against humanity. This, by the way, is already legally registered: in 2008, the German government and the Claims Conference came to an agreement according to which the Jews who survived the siege of Leningrad were equated to victims of the Holocaust and received the right to one-time compensation .

The decision is undoubtedly the right one, which opens the right to receive compensation for all blockade members. The Siege of Leningrad is the same crime against humanity as the Holocaust. Thanks to the actions of the Nazis, the city was actually turned into a gigantic starvation ghetto, the difference between which and the ghetto in the territories occupied by the Nazis was that it did not break into auxiliary police units to conduct mass murders and the German security service did not conduct mass executions here. However, this criminal essence of the blockade of Leningrad does not change.