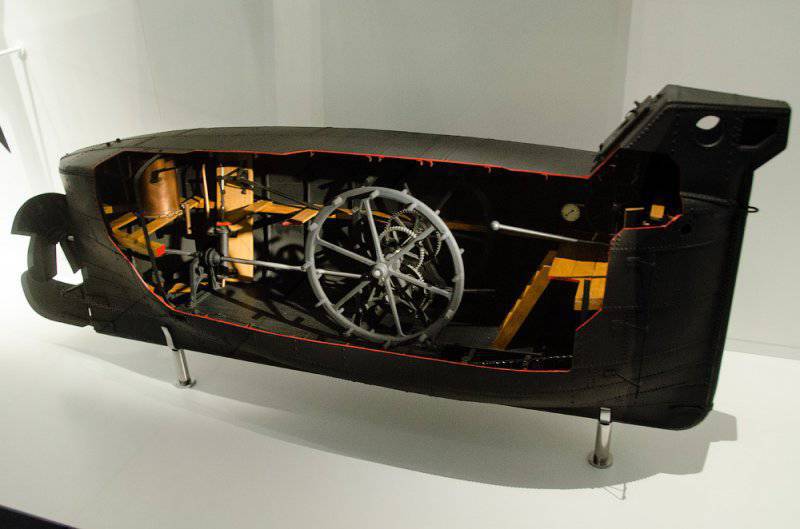 If you remember that German submarine, which a certain circle of specialists considers to be the first submarine, similar in spirit to the modern one, then it was created in the distant 1850 year. The chief engineer of the submarine became a German engineer Wilhelm Bauer. The name of his brainchild, he gave a rather unusual: "Brandtauher", which literally translated into Russian sounds like "fire diver". Another name for the boat, which was used by the sailors, is “Iron Seal”. This name arose because of the shape of the submarine and its color.
The main feature of Brandtaucher was that the water was not injected into the special ballast tanks, but directly into the hull of the boat, the wall thickness of which was about 6 mm. Instead of special tanks, necessary for the correction of the boat in the water, was used semitone dynamic cast iron ballast. The crew of the boat consisted of only three people.
The maximum depth of the Brandtaucher, apparently, was calculated erroneously. Already on the fourth test Brandtauher sank. The cause of the catastrophe was associated with excess water, which was poured into the hull of the boat and not enough successful use of the cast-iron ballast, which was discussed above. The walls of the submarine were severely deformed.
Let us return to the strange name of a submarine from Germany. "Fire diver". Its name is such for the reason that the so-called “Brand” (fire) was carried on board the boat. This is a relatively small bomb that could be attached to the bottom or side wall of an enemy ship. The bomb exploded, causing a fire on the ship. With the help of Brandtaucher, it was planned to cause fires on enemy bridges, disrupting the transport infrastructure.
If you decide to see the first German submarine with your own eyes, then for this you can go to Dresden, where she is exhibited in the Museum of the Bundeswehr.
Ctrl Enter
Noticed oshЫbku Highlight text and press. Ctrl + Enter
We are
Walrus submarinesSubmarine Lamprey
Military Reviewin Yandex News
Military Reviewin Google News
2 comments
Information
Dear reader, to leave comments on the publication, you must to register.