Baranets: Russia learned the bitter lessons of the Five-Day War with Georgia 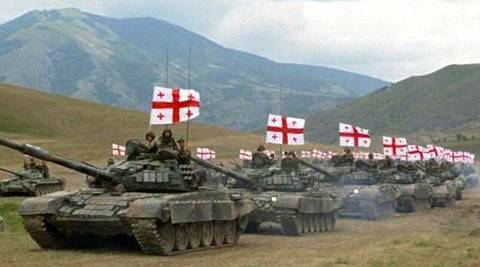 Exactly five years ago, without a declaration of war, Georgian troops attacked South Ossetia. August XXXX President of Russia Dmitry Medvedev announced the start of a peace enforcement operation. Within days, the Russian army and the South Ossetian militia routed the aggressor and liberated South Ossetia. Anatoly Sokolov, a military observer at Rosinformbyuro, asked the retired colonel of the General Staff, Viktor Barants, to tell about the unknown pages of the Five-Day War.


- Viktor Nikolayevich, our intelligence, really, “overslept” the preparation of Georgia for war?

- Partly. The scouts of our peacekeeping contingent in North Ossetia worked directly at the junction of the borders, where Georgia was concentrating its troops, and transmitted information about these dangerous maneuvers. But some army commanders and leaders of a higher rank in the General Staff regarded their data as a banal provocation by Saakashvili, which was done earlier many times and did not betray it to proper importance.

The employees of the GRU and SVR worked on the territory of Georgia itself and transmitted information through various channels about the advancement of columns of Georgian troops in the direction of Tskhinval. But this information was also not given due importance. As a result, the information transmitted to the General Staff did not work. At that time, there was no center capable, on the basis of the information received, to take the only correct decision and prepare the troops for various scenarios.

- What can you say about the role of the General Staff in the initial period of this war?

- The beginning of hostilities is already covered with a thick layer of fairy tales, conjectures, gossip and rumors. But I know the facts when the "seasoned" generals from the General Staff, who were dismissed by then Serdyukov, were again called in to perform certain functions. The war with Georgia showed that our army was not reformed according to the best scenario. Specialists were drawn to the General Staff on the principle of personal loyalty and acquaintance, and not on the head and the brains in it. And for this, the former head of the General Staff Nikolai Makarov, who proved himself to be a talentless commander and, to the great surprise of the Russian army, received the Golden Star of the Hero of Russia, bears the lion’s share of the responsibility.

- Is it true that the initial failures of our troops were due to the repair at the General Staff that was underway at that time?

- Then the repair of the General Staff was really going on, and a number of its services were relocated to Leningradsky Prospect to the joint headquarters of the Collective Security Treaty. In connection with the transportation of documents and equipment, the “brain” of the General Staff was disarmed. Centralized communication worked well, but operational communication did not work. Because of this, the army commander 58 was forced to use the mobile phone military correspondent "Komsomolskaya Pravda" Alexander Kots.

- How do you assess the actions of our troops, especially those who came to the aid of peacekeepers?

- The actions of our troops at that time are estimated differently. At the first stage - this is a mess, confusion, loss of control, illiterate tactics. The second stage was very different from the first. After taking control of the troops in firm hands and correct conclusions from the first mistakes, the approach of fresh units with military equipment, the war went according to the Russian scenario. If continued actions in this manner could lead to the fact that the Russian flag would hang over the residence of Saakashvili. But analysts of the General Staff, the Ministry of Defense and the Kremlin presented a possible global resonance from such actions and our troops were stopped at 15 km from Tbilisi. The Russian leadership considered it possible to dwell on the reached turn and considered the task of forcing Georgia to peace, considered solved.

- Which of the Russian military leaders of the five-day war would you mention? What was their military fate?

- I do not know people who would act correctly and without mistakes at all stages of the war. Everything was determined by the situation. In particular, it is impossible to make a complaint to the 58 command of the army, which did not receive answers to its requests to the General Staff, and then turned out to be fools.

But I am outraged by the fact that many combat officers, who at first were confused, but took themselves in hand and acted perfectly in the future, then were dismissed from the army. Here I would note them, because these people were under bullets, they went through the war and this is the gold reserve of our army. But later a number of them sat in trench coats, drank beer and wept for insult for unfair treatment of them by Serdyukov.

- How to explain our loss aviation during the Georgian campaign?

- The use of long-range aircraft today is recognized as a great tragic folly. I consider such a decision a manifestation of some elite aviation illiteracy, which is associated with loss of control, and with a poor analysis of the situation, and with a lack of understanding of the tactical situation on the battlefield. The generals who dared to take such a step got theirs and many of them are now “courageously” growing strawberries in their dachas and writing memoirs.

But the loss of aviation was also caused by the fact that the Georgian army was pumped by serious NATO and Ukrainian air defense weapons. Their presence and the professionals who managed this weaponsUnfortunately, it was not taken into account. The reliability of this is absolutely proved by prisoners, found documents and documentaries. Another reason is that we did not conduct reconnaissance and did not appreciate the threat to our aviation, for which we paid. The lesson presented to us will be remembered for a long time and I think that we will not step on this “rake” a second time.

- Your assessment of the actions of the Chechen battalion "Vostok"?

- His actions were very effective. This is confirmed by the participants in the fighting on both sides, eyewitnesses say. I want to mention the excellent tactical and physical training of the battalion, which acted very professionally and caught up with a lot of fear on the Georgians. The merit of the battalion is that it helped our troops strike the Georgians in the rear, who were often at a loss for us to give up their positions and equipment. The school available in the battalion may serve as a kind of prototype of the Russian professional army. Currently, the unit is in good shape, and God forbid that there are more such “Vostok” in the Russian army.

- Viktor Nikolayevich, have we learned the lessons of this war? Is the Russian army ready for threats from the South?

- Ready, for the conclusions of the lessons learned are made. This is evidenced by the fact that we have deployed 2 brigades in this region, put up-to-date, stronger weapons there and are conducting constant reconnaissance taking into account the bitter lessons of August 2008 of the year. In short, we keep this region of Russia under a tight cap.

Ctrl Enter
Noticed oshЫbku Highlight text and press. Ctrl + Enter
We are
Victor Baranets. Hormuz mouthNikolay Silaev, Andrei Sushentsov: Georgia after the elections and prospects for Russian-Georgian relations
98 comments
Information
Dear reader, to leave comments on the publication, you must to register.