August 14 2013
20
A recent meeting held at the presidential residence of Novo-Ogaryovo on the issue of fulfilling state defense orders for the Navy once again exposed a rather complicated situation with the supply of new ships to the Russian navy. Although, using the phrase “difficult situation”, one should not forget that any complexity cannot be considered without reference to anything. 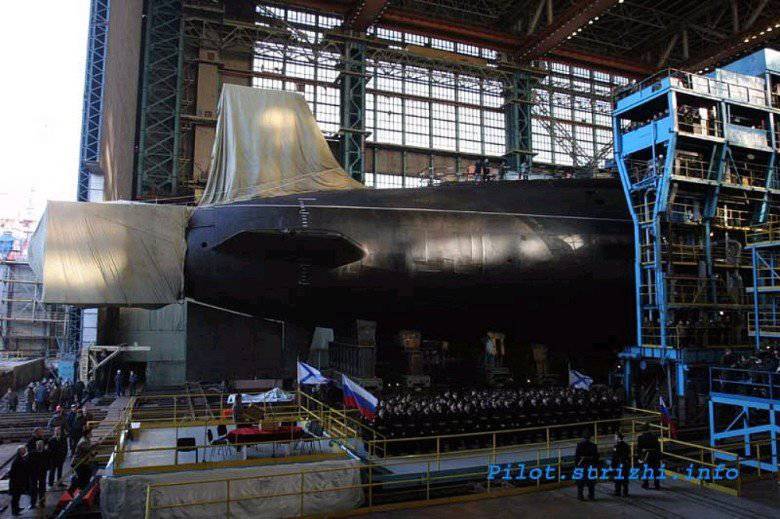 Just a couple of years ago, the pace of placing the state defense order for the navy was such that more than half of the orders scheduled for the 2010 year had to be transferred to the 2011 year. From there, in turn - on 2012-th. Something constantly interfered with the effective construction of the system for locating the state defense authority and, moreover, its full implementation. Naval representatives said that the prices of industrialists were too high, industrialists, in turn, said that prices were quite acceptable, and that the Ministry of Defense deliberately put open pressure on pricing policies. The corruption component also played a significant role, which led to the fact that a case without a “who needs it” rollback could not move from a dead end.

Contracts for the creation of new warships (and not only ships) were signed only when very representative delegations of industrialists and military officials gathered in a special room for business negotiations, and representatives of the Russian government arrived to smooth out the roughness between these delegations with the then head of the Cabinet Vladimir Putin.

Now Putin (already at the presidential level) decided to carry out a kind of monitoring of how the very agreements that were concluded, including with his direct (premier) participation, are being implemented. On the one hand, the cart has really started from the dead center, as stated by the president himself.

Last year, in the framework of the state defense order, the lead nuclear cruiser of the Borey project, Yury Dolgoruky, was commissioned, and the Novomoskovsk and Verkhoturye submarine cruisers were modernized. Repair and maintenance services were 748 ships and vessels.

Putin noted that in the current year the placement of the state defense order was made on 85%. About such rates by the beginning of August, for example, 2010 of the year could only be dreamed of.

On the other hand, despite the positive outlook, there are also quite serious problems not so much when placing the state defense order for the Navy, as when implementing contracts. One of the problematic manifestations is that the quality of construction and repair work often does not meet modern standards. As a concrete example of the inconsistency of the work performed with the quality standards, Putin pointed out the failure of the equipment observed during the implementation of a large project to 132. Even if we make allowances for the fact that the project is very serious, 132 technical refusals are too much, in view of the fact that each such refusal causes the need for new cash infusions into the project from the state budget. And such additional investments, for obvious reasons, are far from always spelled out in the contract, and therefore, in order to beat them out of the Ministry of Defense, you have to spend a lot of time and nerves. Although in this case, what could be the claims to the Ministry of Defense, if the industrialists themselves in some cases are unable to control the quality during the production process.

If we talk about the causes of low-quality work, in most cases they are associated with the imbalance of joint activities of individual enterprises implementing the project. Exaggerating a little, you can say something like this: bolt manufacturers expect deliveries from nut manufacturers, and they in turn do not have time to cut the thread, and in order to somehow meet the deadlines, they use off-nominal tools for that very cut. As a result, the nuts with bolts have to be integrated almost by welding ...

When more than six hundred separate enterprises, workshops and artels take part in the implementation of a single project, which are often still in mode of unexplained internal competition, in the end, with the help of welding, everything has to be integrated. Final quality? Deadlines? They can grow together, but they can - and not ...

In order to find ways to solve this problem, it was suggested to the United Shipbuilding Corporation to reconsider their attitude to work planning and strategies for their own development. Vice Prime Minister Dmitry Rogozin, in particular, said that USC should complete work on its strategy by the end of September. This new strategy will now be calculated on as many 30 years ahead. Why choose 30? - Rogozin explained. Such a horizon was chosen for approximate correspondence to the “life” period of an individual warship. In other words, the USC must proceed to a new planning stage even when the ship, which corresponds to the fulfillment of the points of the previous plan, has been launched. This will ensure systematic work, which in turn will prevent temporary failures in the work of the corporation.

For the time being, the USC works on the basis of a recently developed strategy, which in recent years has begun to produce certain results. In particular, this year the 36 ships of the Navy will be included in the battle formation (and some of the ones mentioned below have already entered). Ship delivery from enterprises today is established. Of course, the ideal efficiency is still very far away, but it’s foolish to deny that the Russian Navy is filling up with new equipment.

For example, the submarines of the 677 "Lada" project ("Kronstadt" and "Sevastopol") were laid back in the 2005 and 2006 years, respectively. However, until last summer the construction had to be frozen for several reasons. One of these reasons is the inability of the representatives of the Ministry of Defense and industry to agree on prices after the economic crisis.

Three submarines of the 636 "Varshavyanka" project are being built at the shipyard "Admiralty Shipyards" (as well as the boats of the "Lada" project, by the way). One of these boats will be launched next autumn. The other two are in 2014. At least, it was on such conditions that contracts were signed. Another three submarines of the 636 “Varshavyanka” project have already concluded contractual obligations, which must be realized before the 2016 year.

The multi-purpose MPLATRK K-560 "Severodvinsk" successfully passes the test. Another boat of a similar project is being built - the Kazan, which is to be commissioned according to plan in 2017. Four other MPLATRK project "Ash" contracts.

In January of this year, Yuri Dolgoruky, the 955 “Borey” project, was sent to the Navy. "Alexander Nevsky" participates in running tests. “Vladimir Monomakh” is taken out of the dock, and full completion of all the necessary work is scheduled for this submarine at the end of 2013. Construction and preparatory work is carried out in three more boats of this project (“Prince Vladimir”, “Alexander Suvorov”, “Mikhail Kutuzov”). In addition, the Ministry of Defense is carrying out plans to build four more Boreas before the 2020 year.

At the above-mentioned meeting in Novo-Ogaryovo, Putin demanded that the boats Severodvinsk, Alexander Nevsky and Vladimir Monomakh be handed over by the end of this year. Experts say that even without the President’s demands, the boats would have entered the Navy before next year, as in the case of their construction lately no noticeable deviations from the plan were observed. I would like to hope that the president’s shout will not cause “shock completion of work for such an anniversary of such an event,” otherwise this often leads to the need to rebuild everything on a new one, sometimes investing even more money than the original construction.

In general, a positive in the implementation of the state defense order in the segment of the Russian Navy was outlined. The main thing is not to retreat and not to indulge in depression in the style of “we have shamelessly lagged behind the potential enemy!” And “everything is gone!” In particular, the aforementioned example with bolts and nuts is in fact not so far from the truth. About three or four years ago, the transfer of the American submarine of the Virginia project in the Navy had to be postponed due to the detection of problems with the hull: the bolt holes had an inappropriate radius, it was useful to drive the bolts into the hull with a bias; the 900 bolts around 340 were deformed ...

Ctrl Enter
Noticed oshЫbku Highlight text and press. Ctrl + Enter
We are
Managing the cost of products of defense and other strategic enterprisesRogozin is entangled in the web of state defense order
Military Reviewin Yandex News
Military Reviewin Google News
20 comments
Information
Dear reader, to leave comments on the publication, you must to register.