August 14 2013
5
Moscow acquires high-tech equipment from Paris, which is installed in the export of Russian military products


The French Republic consistently ranks among the top five exporters of weapons. And among the twenty largest buyers of military products (PPS) of France in the last ten years (2003 – 2012), Russia ranks 11-e.

At the end of last year, our country imported military supplies from France in the amount of 118,6 million euros (156 million dollars). This is so far without taking into account the universal landing ships (UDC) Vladivostok and Sevastopol, which are being built on the Russian order at the French shipyards. Therefore, our country has all the necessary and sufficient conditions to improve its rating in the list of the most significant customers of the products of the French defense industry.

The top 20 largest customers of the French defense industry, in which Russia has an honorable 11 place, are formed mainly from the countries that import arms and military equipment, although even world trade leaders weapons - The USA and Great Britain use the French military high technologies. 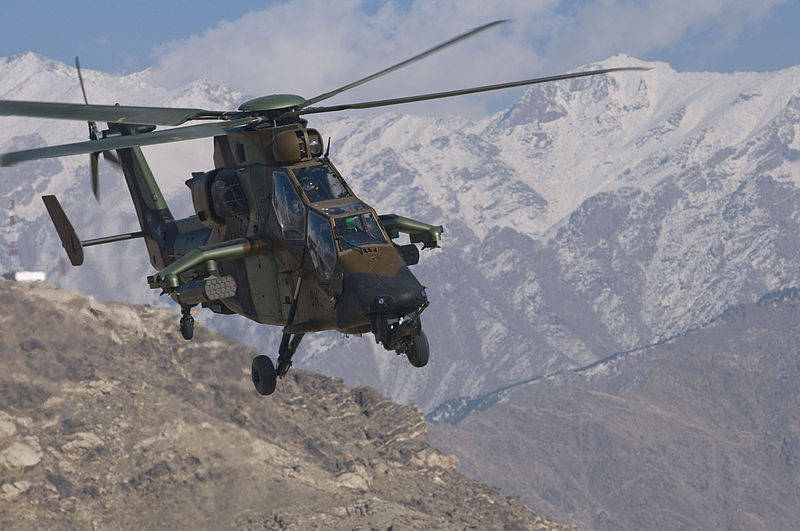 Saudi Arabia is the first in terms of purchases in the list of buyers of French weapons in the past decade (2003 – 2012). This is followed by India, Brazil, the UAE, the United States, Malaysia, the United Kingdom, the Republic of Korea, Morocco, Australia, Russia, Spain, Pakistan, Greece, Oman, Singapore, China, Germany, Turkey and Qatar. The top ten of the largest importers of French military equipment accounted for 54 percent of all purchases of weapons and military equipment of the French defense industry and from the presence of the Ministry of Defense.

According to the July report of the Ministry of Defense to the Parliament of the Fifth Republic (Rapport au Parlement 2013 sur les exportations d'armement de la France), France ranks fourth among the leading exporters of weapons. Experts note that over the period 2006 – 2011, the average annual volume of world exports of defense products amounted to 74,7 billion euros. Leader - USA. They have 48 percent, in Russia - 12, in the UK - 10,8. Then follow France (8,6), Israel (5), Germany (3,8), Italy (3), Spain (1,6), Sweden (1,1) and China (1). All EU member countries account for 30,4 per cent of global arms exports for the period in question, while the average annual export volume of European defense products is 22,8 billion euros. The rest of the world, excluding Russia, accounts for 10,2 percent of the world market for weapons-of-care products. The average annual volume of French exports is 7,7 billion euros. Over the period 2008 – 2012, the countries of the Asia-Pacific region (27,8 percent of all orders), the Near and Middle East (21,4), and Latin America (20,9) became the largest customers of French weapons. At the end of last year, the largest number of orders accounted for the APR (52 percent).

The defense industry of France can produce a wide range of high-quality defense products, which almost all can be in demand on the world market. AT aviation First of all, these are the Rafal fighters, who won the largest Indian tender worth over $ 11 billion for the purchase of 126 multi-purpose MMRCA combat aircraft, Tiger attack helicopters and NH90 military transport aircraft, manufactured jointly with partners. In the missile sector, France can offer a wide range of missiles of all classes and purposes. In the field of land weapons - armored cars, artillery, military vehicles. French shipbuilding products are also very competitive. These are, first of all, the technology of building submarines, the Scorpen nuclear-powered submarines, the new FREMM multi-purpose frigates, and the Mistral-class universal landing ships. French companies export not only final defense products, but also high-tech equipment integrated into foreign military products.

The largest contributions to military exports are made by the leading defense industry companies: Thales, the French branches of the European Aerospace and Defense Concern ЕАДС (Eurocopter and Astrium), the MBDA rocket-building corporation, the Safran group, and the Dasso Avyason aircraft-building company , shipbuilding concern DCNS, Nexter. About four thousand small and medium-sized industrial enterprises participate in cooperation with them in the production of MPPs. In the total volume of production of large-scale basic production, about 32 percent falls on export MPP. For small and medium-sized defense enterprises, this figure is significantly lower and ranges from three to five percent.

Defense enterprises pay special attention to the development of research and development (R & D), which account for 14 percent of annual turnover. Laurent Colle-Billon, Head of the General Armaments Delegation of France DGA, which is the customer of all types of weapons and military equipment manufactured by the military-industrial complex, said that annual funding for defense R & D will be maintained at the level of 700 million euros. In reality, the costs of R & D in France in recent years are higher than the stated values. In particular, in the 2011-m on 60 programs in the field of research and development it was planned to allocate 695 million euros, but in fact gave 724. A year earlier, R & D expenditures were projected at the level of 635 million euros, and received 730. Previously, real expenditures on defense R & D were less than planned. As the head of the DGA noted, the priority research programs included research in the field of military aviation and space, the launching of the Elisa satellites into the orbit of electronic reconnaissance satellites, and tests on automatic landing of an unmanned helicopter developed by the United States.

In 2011, preliminary studies were initiated to assess the replacement of nuclear submarines with ballistic missiles (SSBNs) under the SNLE-3G program. Several hundred million euros are allocated to this program before 2016 – 2017, after which the development phase of the new SSBN can begin with its launch in 2030.

As part of the Prometheus program, DGA allocates funds for researching a new rocket to replace the ASMP-A. In particular, tests are conducted hypersonic ramjet engine (scramjet), the first flight of the demonstrator which can take place in 2014 year.

A number of studies are associated with the development of new airborne radar, which has new operating modes and increased noise immunity. Several tens of millions of euros have been allocated to this program, and the radar station itself must comply with the concept of a future French combat aircraft.

Funding for defense R & D has received special attention in 2013. The cost of R & D this year will increase by ten percent compared with 2012-m and reached 750 million dollars.

In just the past five years (2008 – 2012), Russia has ordered an MPP in France for a total amount of 383,5 million euros, having issued 486 permits for the import of this product. Last year, the volume of Russian orders for the purchase of drug products amounted to about 200 million euros, while in 2011-m it reached the maximum amount for all history modern military-technical cooperation between Russia and France - 950 million euros, which was associated with the order for the construction of two UDC type "Mistral".

According to the results of 2012, the largest volume (about 118,6 percent) in the volume of deliveries of French military equipment to Russia in the amount of 70 million euros accounts for optical-electronic equipment. This is followed by naval equipment (10), communications and countermeasures (4), and other equipment (5).

If we analyze the supply of French PVNs to Russia in the last year by the nomenclature, then the greatest volume fell on thermal imagers, matrices and components for thermal imagers - 82,51 million euros. On naval technology - 18,36 million. The cost of imported electronic components amounted to seven million, armored vehicles, body armor, protective helmets, protective materials - 4,6. Technologies for the development, production and use of military equipment (1,96 million), explosives and their components, rocket fuels, additives to rocket fuels to improve their energy performance (1,17), military vehicles and components (1,5) were imported for small amounts. , chemical components to improve the characteristics of chemical compounds (0,543), sights, calculators, target designators, weapon control systems, countermeasures and others (0,871).

Recently, a certain euphoria has developed in the Russian-French military-technical cooperation. Some analysts point, in particular, to the fact that there is a “Russian current” in the French Ministry of Defense, this may contribute to the signing of new defense contracts with Russia after the completion of the construction of Mistral-type helicopter carriers for the Russian Navy. This was mentioned by a French military expert, chief editor of the TTU strategic information bulletin Arno Kalika. At the 6 International Naval Show in St. Petersburg, Deputy Prime Minister Dmitry Rogozin said that he would visit France this fall. He plans, in particular, to consolidate a new approach in the field of military-technical cooperation with the republic, which involves the joint design, production and sale of weapons.

"It seems that the next visit of Dmitry Rogozin to France will be held in the context of strengthening the partnership of Russia and France in the field of military-industrial cooperation," said Kalika. He added that this approach is also supported by French Defense Minister Jean-Yves le Drian. “Despite the fact that there are some rough spots in relations between the heads of two states due to contradictions in ideology and political vision, this does not interfere with business relations, including in the sphere of military-technical cooperation,” the expert emphasized. “In the French defense ministry and, in particular, in the Directorate General for Armaments of the Ministry of Defense, the“ Russian current ”has already formed, which may contribute to the signing of new defense contracts after Mistrals, he concluded.

However, so far the state of Russian-French military-technical cooperation can be characterized as a one-way street. In previous years, our countries worked together to create export products to promote the markets of third countries, but, unfortunately, they did not find their further development. So, for example, the Tula Design Bureau and the Silas company 15 years ago worked on the creation of the Russian-French high-precision artillery complex Krasnopol. In October 2000, demonstration tests were carried out during which the Krasnopol UAS was fired from the Zhiat TRF1 cannon and aimed at the targets with the Silas DHY307 laser target range finder (LCD). In this case, propellant charges of Russian and French production were used. The experts of the two countries evaluated the compatibility of the Krasnopol projectile with the TRF1 gun and the semi-active homing head with the DHY307 LCD. Test results exceeded expectations. All five shells hit the target. In particular, all three tank, located at a distance of 100 meters from each other, were struck in the upper, least protected part and completely destroyed. The concrete wall and concrete bin are also completely destroyed. The test results confirmed the full compatibility of the UAS "Krasnopol" with the TRF1 gun and the DHY307 laser target designator. Thus, the possibility of creating the Russian-French high-precision artillery complex and its promotion to the markets of NATO and third countries was confirmed. Nevertheless, the project did not receive practical implementation.

In the middle of the last decade, the French company Panar and KBP worked to promote the Kombat-Quartet anti-tank weapons system to the market. Foreign countries were offered a VBL armored car with a wheel formula 4х4, on which the Quartet module with four Kornet-E anti-tank guided missiles was installed. Marketers are fairly optimistic about the potential market for this development, arguing that it can be in demand in those 15 countries where Panar armored cars are already in use. Among them were the countries of the Persian Gulf, Southeast Asia, Africa and Latin America. Marketing of the new weapon system is carried out in those regions of the world where both Panar armored vehicles and Cornet-E anti-tank systems are selling well. However, interest in this weapon system from potential buyers was not observed.

Time will show how the further development of the Russian-French MTC will proceed. However, so far only Russia is acquiring high-tech equipment from France, which is installed in the Russian export military equipment. But will France be interested in developing a reorganized Russian defense industry complex? The answer to this question, we obviously get in the near future.

Ctrl Enter
Noticed oshЫbku Highlight text and press. Ctrl + Enter
We are
World MIC - who is in the topArms Trade Grows
Military Reviewin Yandex News
Military Reviewin Google News
5 comments
Information
Dear reader, to leave comments on the publication, you must to register.