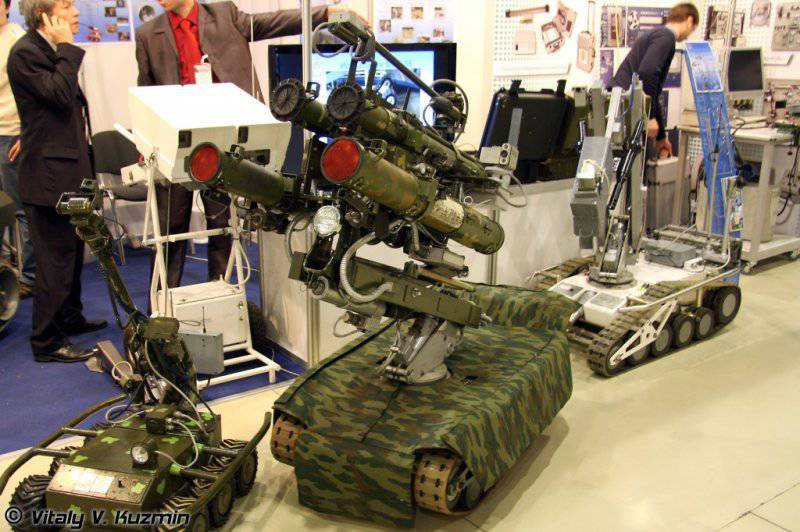 At a recent meeting of the Collegium of the Ministry of Defense, Sergei Shoigu criticized the developers of military robotics. He proposed to stop working with those organizations that would not agree with the tightening of development timelines:

It should be clarified that military robotics does not mean “terminators”, but various remotely controlled or autonomously operating equipment. To robotics include airborne unmanned aerial vehicles, land vehicles without crew, surface and underwater vehicles. And the problem with obtaining such equipment for our armed forces really exists. The need for it has long been realized. What kind of robotic systems do we need?

First of all, these are airborne unmanned reconnaissance complexes. In the armed forces of many countries, they have already become the main suppliers of intelligence and the main means of target designation. In addition, unmanned aerial vehicles (UAVs) are useful for relaying communications and electronic warfare. They master shock functions. And in all these areas, the development of the UAV is underway. Moreover, for several years and for several programs at once. In contrast to previous times, the customer (military department) is well aware of what he wants, and is able to explain. Technical specifications are issued for specific samples; requirements for research and development work are clearly formulated. But the result can not be "look and feel."

The urgent need for a helicopter-type UAV will soon be felt by the fleet. A modern surface ship is already unthinkable without basing helicopters on it. A ship helicopter has too many important functions. This is both anti-submarine defense and over-the-horizon detection of surface targets, the over-horizon target designation of the ship’s arms, radio intelligence and electronic warfare, advanced control of airspace, management of autonomous and remotely controlled systems over long distances. One or two aircraft simply can not cope with this set of functions, without which it will soon be impossible to talk about a full-fledged combat ship. Replacing the deck manned helicopter unmanned while impractical. But to supplement with two or three helicopter-type UAVs will be necessary in the near future. And the UAV will allow to increase the air group of ships of even a small displacement.

Yes, the Horizon Rostov company mastered the production of a very successful Austrian UAV Camcopter S-100, creating for it a domestic control system and target load options. It will be purchased by the FSB Coast Guard. The Navy took one such complex into trial operation. However for naval deck UAV one optical reconnaissance system will be small. But a more serious target load requires a heavier apparatus. In the interests of the Navy, Russian Helicopters are developing systems with three large UAVs with take-off weight of up to 300 kg (Roller, aka Ka-135), up to 700 kg (Ka-175) and up to 3 tons (Albatros). But to see these devices before 2015 is unlikely to succeed.

In addition to airborne UAVs, the fleet also needs unmanned underwater vehicles (NPA) - systems that are controlled remotely or are able to operate autonomously. Without them, it is already impossible to imagine the search and destruction of sea mines. The capabilities of warships to combat mines are minimal - it remains the task of specialized ships (minesweepers and mine seekers). But the appearance of mine devices on warships of the main classes is almost inevitable. Fighting submarines in the very near future will also be the task of autonomous and controlled vehicles. NPA now significantly expands the capabilities of submarines, and in the future this trend will only intensify. Work on such robotic systems are underway. But the results of these works can not be expected immediately.

Perhaps, some systems of engineering protection can be attributed to robotic systems. In particular, the radiominating complexes, which are already in service and continue to be improved. They, by the way, are completely autonomous, and in them the goal recognition without the participation of man is implemented very successfully. Thus, a combination of seismic, acoustic, electromagnetic and optical sensors allows you to accurately identify the enemy's manpower, armored vehicles and even low-flying helicopters. Such systems determine the direction and distance to the target and automatically issue a command to use one or another weapon of destruction: undermining fragmentation ammunition in the direction of manpower, shooting anti-tank ammunition hitting armored vehicles from above, or radio-munitions munitions intended for helicopters.

Ground-based robotic systems that are necessary for our armed forces are also diverse and designed to solve a wide range of tasks. The phrase “combat robot” most often evokes the American tracked cart with the Swords machine gun or its Russian equivalent MRK-27 BT. These remotely controlled vehicles, as well as numerous vehicles that help the special services to neutralize explosive devices, cannot be fully considered robots. In addition, it is possible to use them in small counter-terrorist operations. For the army we need other cars.

And what is most interesting - we have already created them. In the 80s, a robotic complex based on tank T-80 It consisted of two cars: a highly protected manager, in which the crew was located, and managed. This complex went through a full test cycle and worked to eliminate the consequences of the Chernobyl disaster. Successfully tested and remotely controlled tanks. The crew not only controlled them from a distance, but also conducted surveillance of the battlefield, fire from a tank gun, being hundreds of meters from the combat vehicle. There are no technical problems to develop such a technique. But it is desirable to create it on a new base. For example, the new heavy Armata platform is perfect for this. In it, the crew is already in an armored capsule, isolated from the fighting compartment. In fact, the crew controls the combat vehicle remotely, only being inside the machine along with all the remote controls. Using an already worked out combination of a control vehicle with a crew and a controlled combat vehicle (or vehicles), it is possible to create robotic combat systems for various purposes, from engineering to tank ones.

However, we must not forget that, in order for all of the above systems to be really called robotic, they must perform many functions without human participation. This is important because the control channels (in most cases, they are radio channels) are vulnerable to radio suppression facilities. Movement along a given route or patrolling, taking off and landing for airborne UAVs, searching and identifying targets, and in some cases destroying targets - all these tasks should be performed autonomously by robotic vehicles. And this is quite a difficult task, on which the combat properties of such equipment depend. It is doable, but it cannot be solved quickly. And so the problem of the arrival of robotic technology in the army is really a problem of timing. Paying tribute to Sergey Kuzhugetovich in the matter of perseverance and demandingness in relation to industry, I still want to say that when creating the most complicated technology it is impossible to jump over many stages of research, development work and tests. It is not even a question of financing.

One of the right steps to accelerate the development of robotic technology should be considered the formation of the Main Center of Robotics on the basis of the funds of the former Zhukovsky Military Air Engineering Academy. Since the development and production of military robotic complexes involved a wide range of research and production teams, the overall coordinating work center is simply necessary. The Soviet experience suggests that creating new technology requires separate, new scientific and production sites, separate teams aimed at solving new problems. Formation center will end by 2014 year. According to Colonel-General Oleg Ostapenko, the backbone of specialists and several laboratories have now been created. He also said that the complex target program for equipping the Russian troops with robotics has turned out. Regarding its implementation, Oleg Ostapenko said the following:

“Believe me, it has every reason to implement both financing and industry opportunities. With its implementation, we are capable of solving all the tasks for 2020 – 2025 years in order to adequately counter possible threats. ”

Since we are building really modern armed forces, I would like to hope that, no matter how difficult the task is, we will be able to cope with it. Our country coped with not so.

Ctrl Enter
Noticed oshЫbku Highlight text and press. Ctrl + Enter
We are
Fighting robots in future wars: expert conclusionsI fight for the electric body! Ground mobile robots on today's and tomorrow's battlefield. US Technology Overview
9 comments
Information
Dear reader, to leave comments on the publication, you must to register.