Will there be a new war in the South Caucasus? 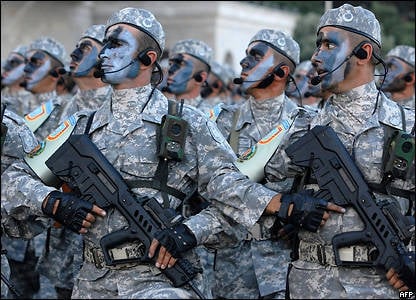 In recent years, belligerent statements have been heard more often in Yerevan and Baku. In the Middle Ages, when two troops converged, especially in Russia, before the battle, the people who were lively and tied into language started a verbal duel - in order to psychologically crush the enemy, to break his Spirit before the battle. Skirmishes on the Azerbaijani-Karabakh border are already common.

Apparently the goal is the same here - to force the enemy to yield, to compromise. But, it is hardly possible in such a difficult situation. The question is very fundamental, the Armenians consider Nagorno-Karabakh their land, and Azerbaijan will not make territorial concessions. It is possible only to “freeze” the conflict for decades; in the current situation, it can only be resolved with blood.

In 2011, the military budget of Azerbaijan will increase by 90% and will exceed 3,1 billion dollars, in 2010 it amounted to 2 billion dollars. At the same time, another 1,3 billion dollars will be spent on the needs of the defense industry, as a result, almost 9% of Azerbaijan’s GDP will be spent on military needs. Approximately the military budget of Tbilisi also grew before the attack on South Ossetia. Main supplier weapons, as well as for Georgia before aggression, is Ukraine, but it is actively arming Baku Russia, Belarus, Israel. Baku maintains extensive military contacts with the United States and Turkey.

The defense industry is actively developing, since the volume of military products has increased 2008 times since 3 in 2009. Azerbaijan itself produces small arms, ammunition, mortars, armored cars. Military production is being developed jointly with other states — armored cars are being produced with South Africa, and rocket launchers are being manufactured with Turkey. The plans to establish the production of their UAVs, Turkish tanks and Israeli armored personnel carriers.

Aggressive statements are characteristic not only of the mass media of Azerbaijan. The head of state Ilham Aliyev has repeatedly stated that the Azerbaijani army is ready for a crushing blow to the enemy. Revanchist attitudes are widespread in society, because during the war 1991-1994. Azerbaijan has lost 20% territory.

The Armenian military budget is almost X times less than that of Baku, Armenia has no oil fields and its income is lower. The number of tanks in Armenia is almost 10 times less than in Baku, in combat aircraft is inferior by 4 times, but this is without taking into account the armed forces of Nagorno-Karabakh. But the quantity of armaments of Armenia is compensated by well-prepared defense and high fighting spirit of Armenians.

The Russian government operates on the principle of "and ours and yours." The stay of the military base in Armenia has been extended to 2044, Russia has provided security guarantees to Yerevan. But Nagorno-Karabakh is not recognized by anyone, it is legally part of Azerbaijan. And if Baku restores the “constitutional order” on its territory, will Russia intervene?

Moscow sells weapons to both Baku and Yerevan. Baku sold the Pion artillery, 2, C-300, 62, T-72, and 70 BTR-80 air defense divisions. Instead of “freezing” military supplies, military-technical cooperation, Moscow is developing them, apparently “money does not smell”.

Will there be war?

According to a number of experts, including K. Sivkov, war is very likely. Perhaps even at the end of the year 2011, or in the summer of the year 2012.

But despite the superiority of Azerbaijan in heavy weapons and aviationBlitzkrieg is unlikely. For 6 years, the residents of Karabakh have turned their territory into a real fortified area, and the terrain (mountains) helps in this. The Armenian army, and it is considered the second in combat readiness, after the Belarusian, in the CIS, will also not be left out when they kill the Armenians .. The war will take a protracted character.

Position of the USA and Western Europe

The fate of Armenians and Azerbaijanis is indifferent to them, but the war in general is beneficial to the West. Russia, Iran, Turkey will get a "headache". NATO as a “peacemaker” will be able to climb into the oil-rich region of the Caspian Sea and adjacent to its likely adversaries - Russia and Iran. Russia's positions in the South Caucasus, and so shaky, will weaken even more - Georgia is an enemy, if Russia supports Armenia and Azerbaijan becomes an enemy. If Russia does not help Armenia, Armenians will be offended, “wherever a wedge is everywhere”.

Therefore, it is better to avoid conflict by all means. Ideally, the Caucasus should be part of a World Project (Russian, Western, Islamic), otherwise blood will flow more often. Between themselves, the peoples of the Caucasus will not be able to reconcile, too they have great differences and old, or already new insults.