There is an answer to American tricks.

August 14 2013
58
In order to effectively address the tasks of strategic deterrence, it is necessary to tighten the provisions in the basic documents on the possibility of Russia's use of nuclear weapons. weapons


Implementing strategic deterrence, the military-political leadership of the Russian Federation pays close attention to strengthening the country's security by maintaining the military organization of the state, including the Armed Forces, in a high degree of combat readiness, preparing the country to repel military threats of any scale and from any direction. At the same time, nuclear weapons are considered to be the main deterrent factor for a potential adversary. However, the issue of a new strategy of organizing the armed defense of the Fatherland is on the agenda.

The United States military-political elite has recently been purposefully seeking means that strengthen their national security and allow them to rely less on nuclear weapons. As such a tool, they consider a new operational-strategic concept - a quick global strike (BSU), the use of which in interstate confrontation can allow to defeat the enemy using only existing and prospective samples of conventional long-range high-precision weapons. At the same time, anti-satellite systems and air defense systems, ballistic missiles and objects containing WMD, and other important objects can be the main targets. According to American experts, strategic means in non-nuclear equipment can be hit from 10 to 30 percent of such targets. In other words, in non-nuclear equipment, strategic carriers will have counterforce potential. 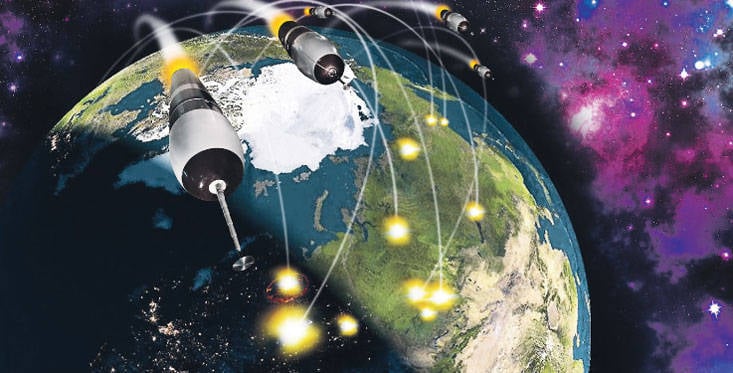 In this regard, the following questions should be asked: Does the concept of a quick global strike fit into a single large-scale range of threats to the military security of the Russian Federation and should the entire system of armed defense of the Fatherland be rebuilt or re-organized to counter this military threat? To get answers, it is necessary to understand the essence of the operational-strategic concept of BSU and to identify the tasks that are set.

Despite the loud name of this concept, the main goal of its implementation is to give the US armed forces the ability to inflict limited-scale high-precision strikes on important targets in the shortest possible time and at long range both with nuclear and non-nuclear weapons. The key points in this target installation are:

Ctrl Enter
Noticed oshЫbku Highlight text and press. Ctrl + Enter
We are
Inflatable tank, hidden Kremlin and other tricks in the history of camouflageMilitary reform as an integral part of the security concept of the Russian Federation: Systematic dynamic assessment
Military Reviewin Yandex News
Military Reviewin Google News
58 comments
Information
Dear reader, to leave comments on the publication, you must to register.