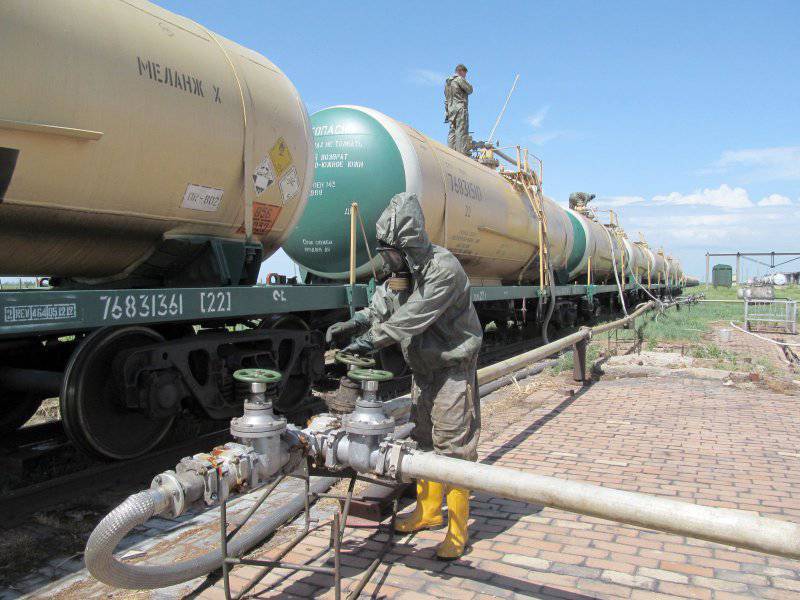 Ukraine sent for recycling to the Russian Federation another batch of rocket fuel component - melange of about 750 tons.


As the press service of the Ministry of Defense of the country reported today, the oxidizer was removed from the warehouse of the ground forces of the armed forces of Ukraine in the Odessa region. “In total, a third of the melange stored here was sent to Russia from this warehouse. The poisonous substance in 15 special railway tanks intended for transportation of chemically aggressive liquids was taken to the Russian Federation for further disposal at one of the enterprises of the military-industrial complex near the city of Nizhny Novgorod, ”said Lieutenant Colonel Alexander Yatluk, commander of the military unit. He assured that when loading rail tankers, all necessary safety measures were observed, this allowed to avoid the ingress of hazardous fluids into the environment. The dispatch of melange was observed by representatives of the OSCE, the Ministry of Defense of Ukraine and the Russian plant, where fuel will be disposed of. The warehouse in the Lyubashevsky district of the Odessa region contained 3,5 thousand tons of rocket fuel. He began to export 2013 to Russia in early July. In June, Ukrainian President Viktor Yanukovych promised that this year all the melange would be taken out of the country’s territory, although the government had previously intended to do this before the end of 2012. After the collapse of the Soviet Union, 16,7 thousands of tons of surplus and sub-standard rocket fuel components remained in Ukraine. According to the end of 2012 of the year, about 2,3 thousands of tons of melange and about 150 tons of other hazardous substances are stored in the ground forces rocket fuel warehouse. The removal of melange from Ukraine takes place as part of a joint project with the OSCE. This hazardous component of rocket fuel is disposed of in the Russian Federation by the Sverdlov Plant in Dzerzhinsk, the Biysk Oleum Plant and ZAO Tehnoazot. Melange is a multicomponent mixture of nitric acid, nitric oxide and corrosion inhibitors. This volatile, aggressive, highly toxic and hygroscopic liquid is used as an oxidizing agent for rocket fuel in liquid-fuel rocket engines. Nitric acid-based oxidizers do not burn or explode, but they cause spontaneous combustion of some combustible materials, in particular rocket fuel.

Ctrl Enter
Noticed oshЫbku Highlight text and press. Ctrl + Enter
We are
The action “Military service under the contract is your choice!” In Rostov-on-Don: future contract servicemen, exhibitions and “Russian Knights”Rogozin visited Nizhny Tagil, shot from a tank and a gun
Military Reviewin Yandex News
Military Reviewin Google News
40 comments
Information
Dear reader, to leave comments on the publication, you must to register.