How many icebreakers do Russia need?

August 13 2013
24
If we talk about the development of the transport system of Russia in the Arctic, first of all we are talking about the development of the Northern Sea Route (NSR), as a single national transport highway. Its development involves sustainable and safe work in the interests of the national and regional economies, international, state and transit transport, as well as the northern export of goods. Provide a solution to these problems without using a modern icebreaker fleet hardly possible. The Russian Arctic fleet needs systemic modernization, which implies an increase in the share of promising icebreakers, as well as the construction of universal or dual-purpose vehicles that are most effective in the changing modern Arctic.

Further development of the NSR involves the creation of the Northern Transport Corridor (STK), which would be available year-round. The JCC would act as a national trans-arctic maritime line stretching from Murmansk to Petropavlovsk-Kamchatsky. Indicative for identifying trends in the development of shipping in the Arctic can be called navigation 2011 year. This navigation demonstrated that navigation of ships of various purposes along the Northern Sea Route, for example, from Murmansk to various ports of Southeast Asia, reduces the time of cargo delivery from 7 to 22 days compared to sailing through the Suez Canal. Naturally, with appropriate security. 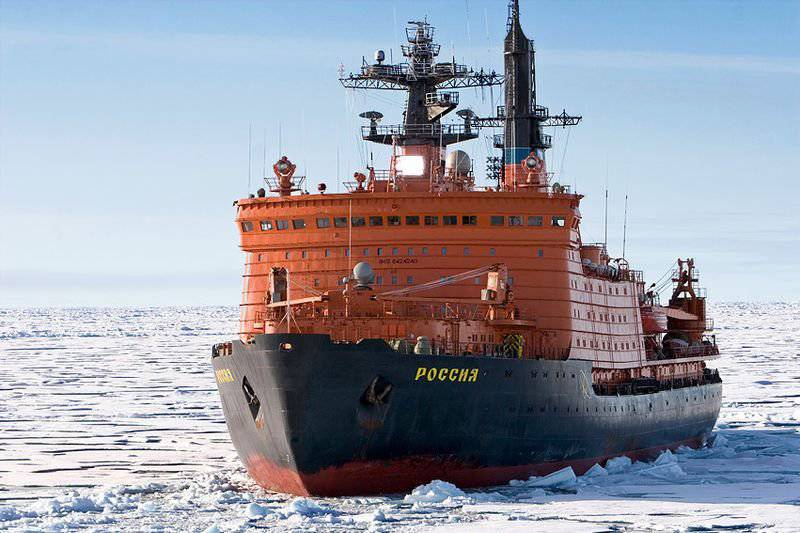 The only nuclear-powered icebreakers in the world are currently located at the piers on the outskirts of Murmansk, in the summer they do not have much work. Rarely they make tourist flights to the Pole, but serious work has not yet begun for them. The Russian nuclear icebreaking fleet is a 4 heavy icebreaker 75 000 HP. class "Arctic", another 2 icebreaker power 40 000 HP class "Taimyr" and one atomic lighter icebreaker class.

The analysis carried out by specialists suggests that transit shipments of cargo via the NSR may increase to 2015-3 mln. Tons already by 4, which will require 100 ice entries per year. By the 2019-2020 years, transit traffic on this route will increase to 5 million tons per year, which in turn will require an increase in the number of ice routes to 170-180. By 2030, the need for icebreaking assistance will be more than 200 per year. The year-round route operation, as well as port service, will be able to reliably provide 5-6 atomic icebreakers with a capacity of 60-110 MW, 6-8 non-atomic icebreakers with a capacity of 25-30 MW and 8-10 with non-atomic icebreakers with 16-18 MW. However, their workload will not exceed 70%. 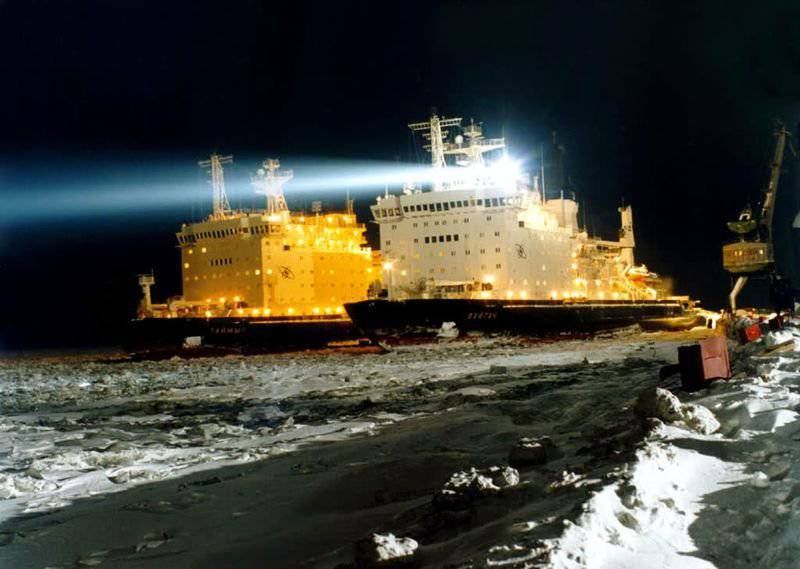 Icebreakers "Taimyr" and "Vaigach"
Unfortunately, it is already clear that the objective growth of annual transit traffic on the NSR may be significantly limited by the lack of the necessary number of modern icebreakers from Russia. Their construction becomes the most important problem of the entire future development of the transport system in the Arctic. Taking into account the most preferable scenario for the development of the Arctic to 2030, a radical modernization of the NSR is assumed with a simultaneous increase in freight traffic on its routes to 30 – 35 mln. Tons each year. Such a significant increase in cargo traffic along the Arctic routes should be the basis of the forecast for the further development of the Russian icebreaking and special Arctic fleet. But it should also be borne in mind that the demand for icebreakers will largely depend on whether the Northern Sea Route becomes attractive to foreign shipping companies.

140 years stories The icebreaking fleet has changed quite a lot in the design of these vessels, most of all over the years their capacity has increased. So if the engine power of one of the first Yermak icebreakers was 9,5 thousand hp, the diesel-electric icebreaker “Moscow”, which went out to sea only half a century later, developed power in the 22 thousand hp, and atomic icebreakers of the Taimyr class can develop power up to 50 thousand hp Due to the difficulties associated with their maritime profession, the power of propulsion systems of modern icebreakers on 1 tonnes of displacement is 6 times higher than that of similar in size displacement ocean liners. At the same time, even nuclear-powered icebreakers remained qualitatively the same as their predecessors - armored boxes, which are filled with huge “herds of horses”. Their job is to break through the ice-hole for the caravans of cargo ships and tankers following behind them; this principle of organizing ice transportation can be compared to the usual movement of barges behind the tugboat pulling them.

Today, Russia has the largest icebreaking fleet among all countries of the world. It includes 40 vessels of various purposes and classes. In addition, Russia is the only state that has its own atomic icebreaking fleet. In its composition today 6 icebreakers, 1 lighter carrier and 4 vessel technological service. Back in 1987, the SMP served 17 linear icebreakers, among which were 8 atomic ones, while their load level was no more than 30%. 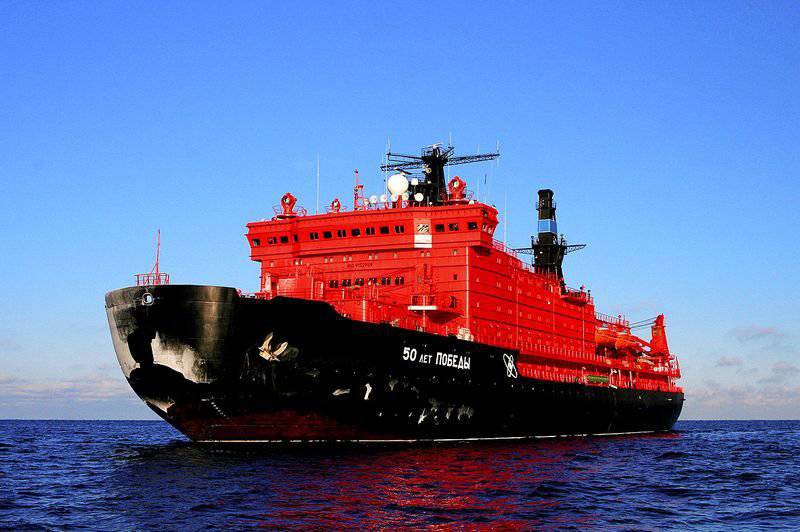 For the icebreaking fleet of Russia is characterized by gradual aging, many ships almost exhausted their resources. Today, Russia has 6 nuclear icebreakers: "Russia", "50 years of Victory", "Yamal", "Soviet Union", "Vaigach" and "Taimyr". But experts are already sounding the alarm, the need to upgrade the Russian nuclear fleet is becoming more and more tangible, since without the participation of these giants it is simply impossible to master the Arctic spaces and retain the status of the Arctic power.

In the coming 5-7 years, the oldest nuclear-powered icebreakers should retire, after which only 2 of the newest ships, the Yamal, which was built in 1993, and 50 Years of Victory (2007) will remain. The icebreakers “Russia” (1985 year of construction), Taimyr (1988 year of construction) and “Soviet Union” (1989 year of construction) will have to go first to the docks. At the same time, Rosatom recalls that for the operation of the NSR in full measure, no less than 10 vessels are required. So far, existing icebreakers are coping with the organization of the necessary traffic intensity, but by 2020, the Northern Sea Route, with an increase in cargo turnover and retirement of nuclear-powered icebreakers, is at risk of being in an “ice break”.

It is not surprising that Russia is thinking about the further development of its own icebreaking fleet. A number of specialists call the creation of an icebreaker belonging to a new generation, which is being created as part of the 22220 project (LK-60YA), as a priority task. This icebreaker should be the most powerful of all currently existing nuclear icebreakers. It will have a hull width of 33 meters. Its main feature should be a variable draft. This will be its main advantage over its predecessors. He will be able to work both in the mouths of Siberian rivers and in the ocean, thanks to a special two-pack construction. This icebreaker will have 2 working draft: 10,5 and 8,5 meters. This function will provide the icebreaker high-speed ballast systems. The icebreaker can change its draft from the minimum to the maximum value in 4 hours.

Project icebreaker LC-XNUMHЯ
The progress of updating the icebreaking fleet

The construction of the national icebreaking fleet was planned in different years in a number of various federal targeted programs (FTP). The very first of them was the program “Revival of the Russian merchant fleet”, which was approved by the president of the country and was designed for 1993-2000 years. In June, 1996, this program was extended to the end of 2001. According to this program, the construction of 16 new icebreakers was planned, but none of them was built within the specified time frame.

This program has been replaced by the new Federal Target Program “Modernization of the transport system of Russia (2002 – 2010).” This program included a subprogram “Sea Transport”, within which a feasibility study for the construction of a new-generation icebreaking fleet was created to support the operation of the NSR. According to this program, up to 2015, it was planned to build and put into operation the 2 atomic icebreaker with a capacity of 55 – 60 MW, constructed according to the 22220 project (LC-60Я), the icebreakers were to receive a new-generation reactor facility.

For 2-3, before the construction of nuclear-powered icebreakers was completed, that is, approximately in 2012 – 2013, it was planned to put into operation the 2 diesel-electric icebreaker of the LC-25 type, as well as to start building the new-generation icebreakers. But this program was unfulfilled. Moreover, to date, not a single modern icebreaker with the required power has even been laid down at Russian shipyards or ordered abroad. Instead of diesel-electric icebreakers LC-25 with a power of 25 MW, 2008 of the icebreaker LC-2009 with a power of 2 MW, built according to the 18 project, was commissioned in 18 and 21900. Work on their construction was carried out in the framework of the changes made to the subprogramme by a decree of the Russian government of 31.05.2006. It is worth noting that LC-18 icebreakers are very well thought-out vessels, but they are not able to solve all the tasks of the linear icebreakers on the Arctic routes. 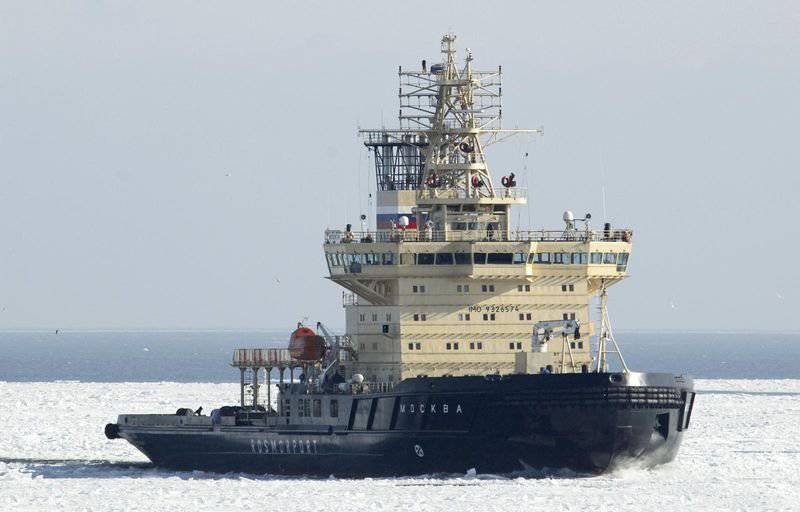 Icebreaker "Moscow" LC-18, pr. 21900
21 February 2008 of the year in Russia adopted a new Federal Target Program “Development of civilian marine technology for 2009 – 2016 years”. Subsequently, its timing was adjusted for 2010-2015 years. According to this FTP, it was planned to develop technical proposals for the creation of a linear atomic icebreaker with a capacity of up to 70 MW of a new generation, as well as an icebreaker leading 110 – 130 MW designed for year-round work on the Northern Sea Route.

This FTP also sets out an assessment of the technical feasibility and the creation of an organizational and technological project for the construction of high-powered nuclear icebreakers (150 – 200 MW). This program of building an icebreaking fleet of Russia on 2012 – 2014 allowed the launch of a universal nuclear-powered icebreaker and another 4 diesel-powered icebreaker with a capacity of 16 – 25 MW. In addition, the government plans to build 2020 nuclear icebreakers before the 3 of the year.

In the adopted “Strategy for the development of the shipbuilding industry for the period up to 2020 and for the future,” the scope of the planned construction of the icebreaking fleet was further expanded. The document, in particular, states that in order to solve the forecasted tasks for the period up to 2030 of the year on transportation of hydrocarbons on the continental shelf, our country will need 90 specialized transport vessels of the Arctic navigation with a total deadweight of about 4's millions of tons and the fleet serving them in 140 units. In addition, it is necessary to build 10 – 12 new icebreakers (in conjunction with icebreakers of various classes and types that will provide sea transport, their overall need is estimated at more than 40 units).

It should be emphasized that the construction volumes of the icebreaking fleet have been determined, but at the moment Russian shipbuilding companies have almost not started implementing such ambitious and relevant plans for Russia. The first nuclear-powered icebreaker LK-XNUMHA I was laid at the Baltic Shipyard at the end of 60, the start of its operation is planned for 2012. With such a pace of renewal of the icebreaker fleet by this time, the Russian SMP may be facing a real threat of an “ice break”.