August 14 2013
37
The Chinese defense industry, developing the traditional directions for the armed forces, also seeks to engage in promising projects. Back in the eighties of the last century, it began work on the development of advanced weapons designed to destroy optical devices and organs of vision of the enemy with the help of a laser beam. For obvious reasons, most of the information on this topic is closed, but some of the information from time to time gets into free access. Based on these data, there are a variety of assumptions regarding the technologies used, applications and prospects. weapons such a class.


The lack of official information does not prevent specialists and weapons lovers from drawing appropriate conclusions and leading discussions. The strange situation with some kind of new laser “rifles” or similar systems is aggravated by the fact that previously such systems were already in service with some Chinese power units. However, due to the nature of the work, the old Chinese-made laser systems fell under international conventions and were banned. According to official data, China has completely abandoned the use of already created and promising laser weapons, the action of which is contrary to the UN convention, which entered into force in the 1995 year. 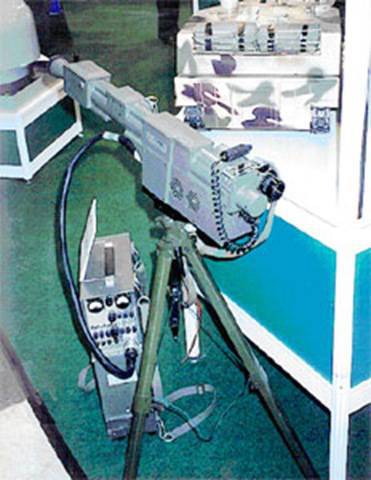 The ZM-87 combat laser became the subject of numerous disputes, and then a ban. This weapon, despite the official Beijing statements about the cessation of operation, still appears from time to time in controversial the news and therefore is the subject of controversy. The main premise for controversy is the secrecy that covers most of the parties to this project. Very little is known about the ZM-87 project. There is information about the approximate time of development of this type of weapon: it appeared at the very end of the eighties and for several years was a secret. For the first time, the ZM-87 was shown to the general public only at international arms exhibitions in 1995, i.e. already during the development and signing of banning international documents. Probably, the Chinese military and scientists decided to seize the moment and show the weapons that would soon have to be written off and destroyed.

As can be seen from the few available images, the Chinese system ZM-87 outwardly resembled a heavy machine gun. On the machine-tripod placed the main unit with a laser and sighting devices. The complex also included batteries, allocated in a separate module. According to some sources, the ZM-87 could be connected to the power grids of armored vehicles or ships. The laser block of the weapon weighed about 35 kilograms. Presumably the neodymium laser with a power of 15 milliwatts in combat mode gave five pulses per second. According to reports, these characteristics allowed the ZM-87 to cause the enemy a temporary loss of vision at a distance of about 10 kilometers. At distances of about 3-5 km (depending on the mode of operation of the laser), irreversible damage to the retina of the eye was possible. Also, this combat laser system could be used to destroy or destroy the optical systems of enemy machines, including thermal imagers.

According to official Chinese information, the production and operation of laser weapons such as the ZM-87 completely stopped several years after the entry into force of the prohibition documents. During production, the defense industry managed to assemble 22 units of such complexes. The distribution of these weapons by units of the armed forces and special services remains a mystery. Even after the official decommissioning, China did not disclose such information. Perhaps it was this secrecy, which was all the time surrounding a promising project, which caused the appearance of numerous rumors of various kinds.

Perhaps the most famous incident in which the ZM-87 laser system was supposedly used was the events of April 1997 of the year near the territorial waters of the United States and Canada. The Canadian Coast Guard noticed that the cargo ship’s antennas have an unusual configuration. Suspected ship scout ship, Canadians and Americans sent him a plane with photographic equipment. The task of the pilots was shooting a suspicious vessel. The result of this photographing, according to some sources, was burns of the retina in two crew members of a coast guard aircraft. The version, according to which Chinese-made laser weapons were on board, quickly appeared. Soon the ship was searched, but no trace of the ZM-87 or similar systems was ever found.

Later, the ZM-87 combat laser was repeatedly mentioned in the context of various incidents, but direct evidence of its use was never provided. It is possible that the blinding laser weapon was a project that had great prospects, but was closed due to the reluctance to have problems with the international community. However, the achievements obtained during the creation of ZM-87, are not lost. In the middle of the two thousandth, the first images of the new design began to appear.

At this time, the Chinese defense industry has created a laser weapon, suitable for use without additional funds like a machine. The new "laser rifle" is fully consistent with the chosen name. This laser system is made in a compact case, the shape of which resembles small arms bullpup schemes. A small interchangeable magazine, like rifles or machine guns of this layout, is placed in the bay in the butt of a laser weapon. Thus, the new model of the "laser rifle" is much more convenient to handle compared to the old type of ZM-87. A new weapon is equipped with an open or telescopic sight (for "shooting" over long distances). In addition, in the existing photos of the complex there is a certain expanding nozzle. Its purpose is unknown, but there are several versions. For example, some experts believe that inside this nozzle there is a group of diverging light guides, and the device itself is intended to separate the light flux and "shoot" at large clusters of enemy personnel. 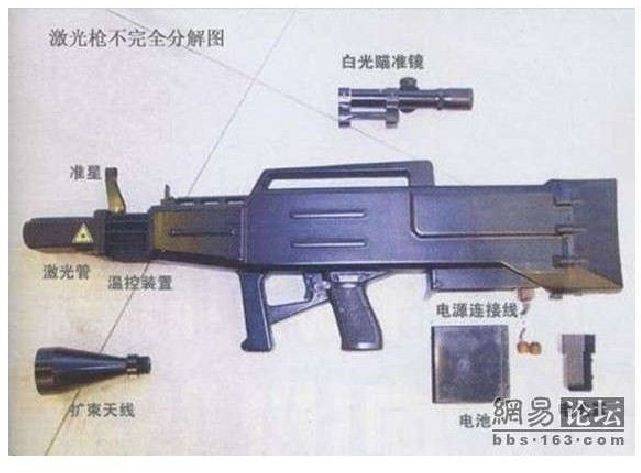 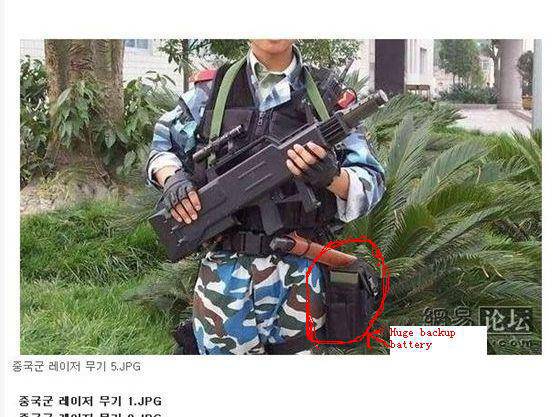 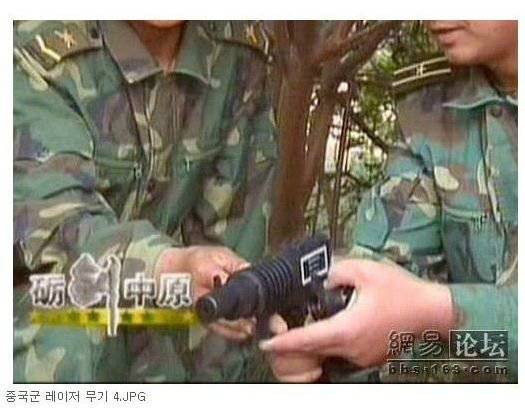 There is information about the adoption of a new "laser rifle" for the armament of the power structures of China. From this it follows that the non-lethal laser weapons of the new model can be used also to suppress riots. Based on this fact, you can make some assumptions about the characteristics of the weapon. Probably, the power of the emitter is designed in such a way that when operating at distances of up to several tens of meters the laser beam does not cause irreparable damage to the eyes of people who have come under fire. At the same time, the beam must be powerful enough to cause temporary blinding or at least discomfort. The ability to cause fatal damage, apparently, is not provided. This assumption is supported by the absence of any switches or regulators on the body of the new “laser rifle”.

Regardless of the characteristics of a particular sample of laser weapons, you can make the most important conclusion. China is actively engaged in the direction of combat lasers and does not seem to be going to leave it. Despite the difficulties of a legal or technical nature, the creation of new systems continues. So, a few years ago, information and a few photos of a new laser weapon made in a pistol form factor appeared. The year of creation, characteristics and intended uses of this sample remain unknown. However, by the very fact of his existence he can tell a lot about the plans of Chinese scientists and the military.