The White House was closed for menopause, or whatever you call a boat, it will float

August 13 2013
109
The American president publicly showed his lack of balance: he threw out frustration and resentment at the foreign policy level. Last week, he refused to meet with Vladimir Putin in Moscow, and then completely announced a “pause” in relations between the United States and Russia. Analysts are puzzled: not that Obama is nervous because of Snowden, a new resident of Moscow, is not worried about the "blue" oppressed in Russia, or the owner of the Oval Office was offended because of the democratic failure in Syria, which the Kremlin continues to support. On "Military Review" hypothesized about that. that Obama is annoyed at himself - at his own foreign and domestic political setbacks. 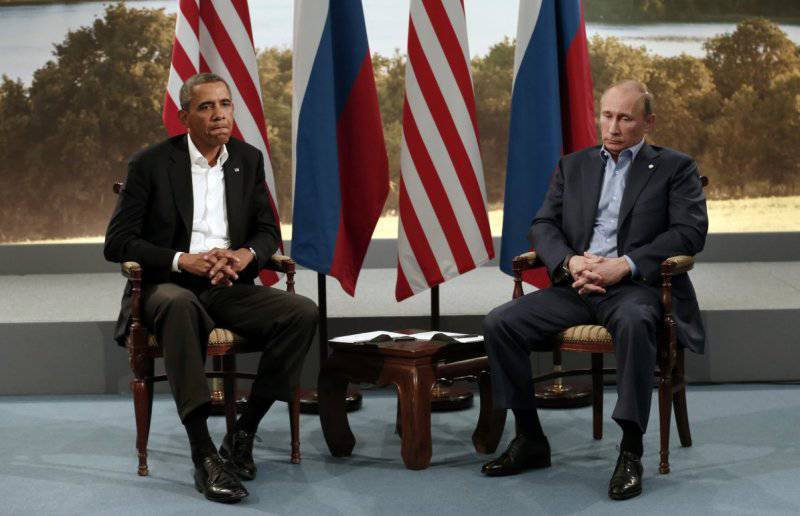 The President of the United States, however, noted that he sees no reasons that would interfere with the better cooperation of his country with Russia. Obama remarked: “There are times when they roll back to the mindset and mentality of the cold war.” But I tell President Putin that this is all in the past, and that we should think about the future. And there is no reason why we cannot cooperate more effectively than we do now. ”

Already in these words one can see not only personal irritation, but also the accusation addressed to Russia appears well. Undoubtedly, the Russians are again "rolling down." As always, they are to blame. They sheltered Snowden, they once unleashed the Cold War, they dropped bombs on Hiroshima and Nagasaki, they, using secret KGB methods, plunged the United States into the abyss of the economic crisis, putting a major public debt builder at the Fed's money machine. Comrade Bernanke.

Probably something like this, Obama argued. And if not, then why the term “cooperate more effectively” means giving out Snowden and generally following in the wake of the USA? Why does the United States do not wish to recognize anyone as equal, by “cooperation” understanding only the slavish conditions of relations between a southerner and a planter and an exhausted slave? The modern world is not very suitable for such relationships. However, in the United States - democracy, and true democracy is based on slave labor.

Senator McCain added fuel to the fire of Mr. Obama’s personal passions. You can’t call this a Republican a silent person at all, but the other day he surpassed himself: he gave out several speeches at once. Of course, they all went straight to the media.

British newspaper correspondents The Guardian A. Lun, L. Harding and P. Lewis provided some of McCain’s basic anti-Russian theses. The hawk senator proposed the following measures against Russia: expand the Magnitsky list, insist on Georgia’s admission to NATO and implement the US missile defense program in Europe.

Then it became known that Barack Obama canceled the planned Moscow meeting with Vladimir Putin. The reason for the cancellation of the talks was, as reported, not only the contradictions that arose between Russia and the United States because of Snowden.

The White House complained about the tough stance of the Russian authorities on other issues, including the deployment of the US missile defense system, notes "Lenta.ru"referring to the Associated Press.

In Washington, they explained that Obama would come to Russia for the G20 summit, but he would not meet face to face with Putin. Instead of meeting with him, the American president will visit ... Stockholm. (By the way, the Swedes are already joking on this topic - they say Obama will give the government valuable advice on how to save Sweden from the bombing of Stockholm by the Russians).

On Friday, 9 August, the second episode went on the air. The US president said that he intended to take a "pause" in relations with Russia, without specifying what he had in mind.

Maybe he decided to take a break from the recalcitrant Russians. Maybe he just blurted out something wrong before going on vacation. Maybe he called the vacation "pause" - they say, while Obama is not, there is no geopolitics. Maybe Obama was completely misunderstood or even incorrectly translated, what happens.

However, they understood and translated Obama correctly. Since he said not only about the pause, but also about something else, he thereby made it clear to the Kremlin how great his annoyance and resentment was. It is even possible that he took leave to calm down.

The key moments of Obama's statement are as follows: 1) praising Medvedev in defiance of Putin (under Medvedev, they say, the relations between the United States and Russia have made great progress); 2) mention of anti-American rhetoric, returned to the Kremlin after the presidential election in the Russian Federation 2012; 3) Putin’s comparison with a “tired schoolboy”; 4) Recognizing that differences between the United States and Russia will persist.

Obama's words spread throughout the Western media made a very unpleasant impression on the Russian government. A source in the Ministry of Foreign Affairs of the Russian Federation, in an interview with the newspaper Kommersant, expressed regret that the American leader was “wound up” to such an extent that he “became personal”, reports newsru.com.

The American president said that relations with Putin were “not bad,” but “it sometimes seems that Putin looks as if he is lounging in a chair, like a tired schoolchild in the back row.”

“Obama turned to the individual, which is absolutely unacceptable,” a source in the Ministry of Foreign Affairs told the Kommersant newspaper. - He said that it is necessary to follow the situation in the Russian Federation. What to watch? I would rather come and talk to us. ”

It is also interesting that sources from a publication close to the State Department stressed that the “pause” will be lifted only when Moscow’s concessions on the most pressing issues of cooperation.

This means that the policy of dividing the right and the guilty under Obama continues exactly the same way as it did under the other presidents: the US is always right in all disputes, all the others are mistaken. If the whole world condemns the USA, so much the worse for the whole world.

The ideal politician for Washington is someone like Gorbachev. Yeltsin, as an unwitting follower of the ideas of Mikhail Sergeyevich, also fully corresponds to the spirit of "cooperation" that the State Department preaches. When Russia is governed by such “leaders,” Russia is on the right track from the point of view of the White House: stumbling to the grave.

When Russia suddenly gives shelter to a fighter with total US tapping Snowden, this ideological seeker and a staunch opponent of the American “Big Brother” (who knows “Brother” from the inside), this means that the Russians, according to Obama, “roll back to thinking and mentality” cold war. This statement is not even a double standard; it is something of the inverted logic of the Bolshevik Pyatakov.

“Today, Russia is the most beloved American horror story. The anti-gay laws passed there and the unwillingness to participate in our interference in the affairs of Syria has absolutely nothing to do with it, ”the channel quotes. "RT" the words of the journalist Antiwar.com Justin Raimondo.

The progressive author believes that Snowden is the problem for the United States. And here it is curious that the provision of temporary asylum gave the Americans a reason to reproach Putin for ... strengthening authoritarianism.

Comrade Raimondo, who is unlikely to be a fan of Putin’s management style, considers such statements absurd. In his opinion, the “authoritarian” Putin did not betray Snowden to the United States, because the CIA whistleblower turned out to be for Russians a symbol of freedom from state surveillance. “Even a tyrant must make some concessions to public opinion,” said Raimondo.

The journalist is sure: there is no foreign policy, and all the actions of the ruling elite of any state pursue the goal of maintaining and increasing their own power. Raimondo writes: “Therefore, forget about all the important issues that Washington and the Kremlin should decide between themselves. The scheduled summit was canceled because Putin put Obama’s political reputation inside the United States under threat. ”

Vladimir Putin did not react to a number of expressive statements of his American colleague, showing restraint. Silence is easy to understand: a celebration in the geopolitical arena does not need self-advertisement. As for Obama, he would not have gilded the point that the Kremlin earned on Snowden if he had just kept silent. By canceling the meeting with Putin, and even more so by telling journalists about the “tired schoolboy” (which he himself is more like than Putin), Obama showed weakness: he went on about Republican senators like McCain and Graham and scored an own goal.

The time was for McCain to break out in a new speech. And he broke it - on Fox News. "It is obvious that the granting of asylum to Russia by Snowden is an indicator of extremely poor relations between the US and Russia," he said. correspondent ITAR-TASS Dmitry Zlodorev.

The American hawk admitted that "many Americans, especially young ones, view Snowden as an exposer." The legislator is confident that Snowden caused damage to the United States.

It is not known how much “dropped” the USA by Snowden. But it is known what candidate was promoted in 2012 for the presidency by the Republicans - McCain, both Bush and others. Mitt Romney, as everyone knows, during his election campaign, called Russia the number one geopolitical enemy for the United States. Also this Mr., without worrying about the crisis in the least, was in favor of increasing the Pentagon’s budget.

Now, some part of the spirit of an old McCain, if you resort to the language of mystical thrillers, mingled with Obama's consciousness. It was enough for journalists to write that Obama should not be led by the “hawks” in order not to lose his political face, as the US president did exactly what he was not advised to do.

Blaming the Russians for falling for the Cold War, Obama is doing precisely that which is spinning a new round of this very war. Bringing “peregruzka” instead of “reset” on the symbolic button, Obama seems to have really experienced a real overload. In the end, as you call a yacht, so it will float.

Ctrl Enter
Noticed oshЫbku Highlight text and press. Ctrl + Enter
We are
Results of the week. "Kazan ... took ... Astrakhan ... took ... Revel ... took, Shpak ... n-did not take"Geopolitical mosaic: Russia entered the top 5 of world economies, and in Washington they learned that Russians “spit on the United States”
109 comments
Information
Dear reader, to leave comments on the publication, you must to register.