Boycott of the Olympics boycott in Sochi, or the Mechanism fails

August 13 2013
130
And how did this manage us to give Russia the right to host the Olympic Games in 2014 year ?! - Representatives of the progressive Western intelligentsia think. Then they take some time off from this thought and go on to think about something else: we did it right, after all, that we gave Russia the right to host the 2014 Olympiad in Sochi, otherwise it would be very difficult for Moscow to leverage the pressure. But it’s somehow difficult to talk to Russia without leverage, it turns out, to talk, and you’ve got used to moving 90's from the beginning with levers in order to give the Russian course the right direction.
So what about the Olympics, and what about leverage? .. The fact is that the recent events have put most of the Western powers of the masters in a position in which they are, to put it mildly, uncomfortable. They are accustomed to Russia as a “loser” at one time: ryav-ryav to Moscow, and that under the visor ... Do this — do, say, say, say, give it, give it, give. But for some time now, “ryav-ryav” ceased to work, and if it does not “ryav-ryav”, then the West, preoccupied with our behavior along with the behavior of the Russian authorities, has to switch to a shrill “tyav-tyav”. 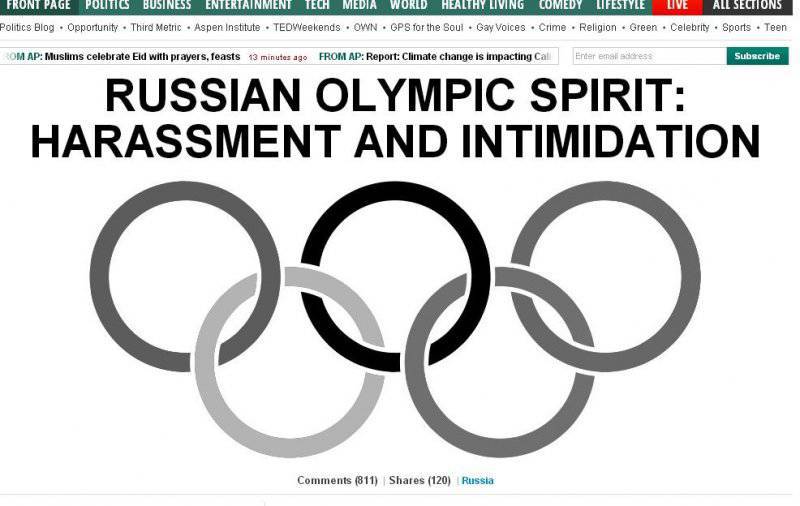 Edward Snowden, impregnated with an impressive thorn in the plump body of Western “democracy” and his failure to give out American curse from Russia, showed that the king turned out to be naked ... The word about sanctions, the inevitable punishment for Russia, of a “democratic” square still cannot go further than inflating sponges of the US administration and those gentlemen who are engaged in real taxiing in the United States. The non-systemic opposition is still waiting for the democratizers to bring down their blow on the intractable Russia, but such a disease as the “subtlety of the intestine” does not give democratizers the opportunity to please hyper-liberals. Everything that they have yet decided on: to prohibit Obama to meet Putin personally, unwittingly confirming the idea that Barak I himself goes to the slaves of the system that calls him President ... Eh, Barak, Barak ... for importance and external observance of democratic nuances

Realizing that with the ban for Obama to meet with Putin, the “taxi drivers” were lit up, they began to look for a reason to explain. They say that the fact is that our president is extremely concerned about the non-observance of the rights of sexual minorities in Russia, as well as the whole “progressive” public is concerned about them (the violation of their rights). Representatives of an extremely anxious public were such as God forgive me, the lumps of world culture as an actor, writer and blatant gay in combination with Stephen Fry (Great Britain), a singer and actress in outfits from semi-finished products and raw materials of animal origin Lady Gaga (USA) and a number of other personalities. 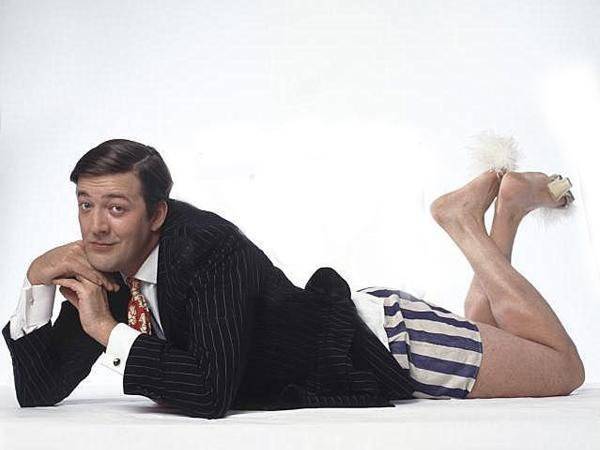 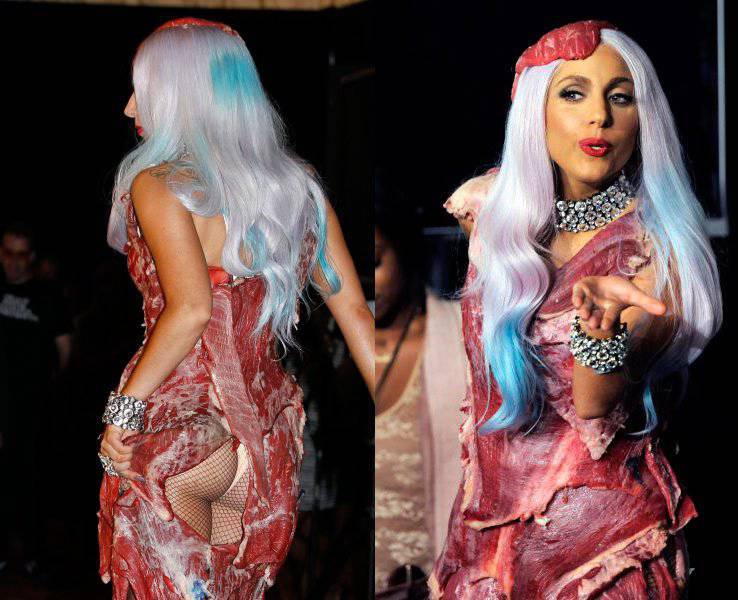 The same Lady Gaga (Greenpeace was on vacation ...)

Mr. Fry urged the world community to boycott the Sochi Olympics in a fit to sensitize the "dense" Russians, delivering indescribable pleasure to Russian and non-Russian wrestlers for freedom, comparing the ban on gay propaganda in Russia with the persecution of Jews in Nazi Germany, and Putin with Hitler. The idea of ​​a boycott of the Olympics in Sochi began to replicate foreign media, and the "tyav-tyav" began to be heard from different sides. The same Lady Gaga in her microblog asked why the Russian police did not arrest her during the concert, following the law on gay propaganda, and she herself answered in the style: they say, who am I, and who are these pathetic little people in Russia , not forgetting to thank the fate for the fact that she managed to hold a concert in the Russian Federation, being in the country on a tourist visa and not pay any taxes to the Russian treasury ...

However, those who wanted to pull the levers of pressure on Russia ultimately expected a fiasco. Stephen Fry and the rest who wished to call on athletes and politicians to boycott Sochi-2014 received a clear and unequivocal response from the representatives of the IOC. The International Olympic Committee asked "not to confuse their personal wool with the state", stating that the political differences and interests of individual, even if respected in certain circles, citizens can not cause a boycott of an international sporting event of great importance.

“Tyav-Tyav” had to be muffled after a number of publications in the American and British press, when several journalists at once reminded the world that, apart from Russia, there are at least another six dozen states in which “blue propaganda”, to put it mildly, not welcome. Among these countries are the lights of Middle Eastern democracy: Saudi Arabia and Qatar, where it is common for gay things to be sent to the best worlds ... Not only that, Qatar itself will take a big sporting event in some time - the 2022 World Cup. Whether Mr. Fry and Lady Gaga are not yet aware of this, the fact is that the criticism of Qatar is a taboo for any representative of the progressive Western intelligentsia.
Even the grandfather of American democracy, Senator McCain, did not support the idea of ​​an Olympic boycott, obviously realizing that such support would lead to a blow to his own party:

Our experience of boycotting the Olympic Games in the past has not been successful.

In addition to publications that not only in Russia with gay propaganda do not need to joke, in the Western press began to appear materials in which the position of those calling for a boycott of the Sochi Olympics, frankly ridiculed and expressed in the form of the desire of the American power elites to push workarounds opportunity to press on Russia. The main reason for the indignation was Edward Snowden, entrenched in the Washington and London throats, who had planted a fair sow to all those who exposed Western democracy to a sparkling crystal.
We offer a selection of quotes from people who, to put it mildly, are not enthusiastic about the very idea of ​​a boycott of Sochi-2014.

They had long been trying to find out what to do with the Olympics, which would be an ideal propaganda move. They tried to unleash history corruption, but it did not work, and someone could say: well, let's connect this with gay discrimination.

Lenny Kasten (general manager of the US bobsled team):

The US themselves Snowden missed, what have the athletes?

Some American politicians are always ready to turn to the Cold War mentality. Relations have cooled, but there is no cold war, Russia is not our enemy. And, moreover, a consensus was formed in society that as a result of the boycott of the 1980 Olympiad, nothing was achieved, only relations between the countries deteriorated. If the United States wants to complain, they can do it in various diplomatic ways. The Olympic Games are not suitable for this.

We are spying on the whole world, listening to phone conversations, and this guy (Snowden) tells the whole world about it. And he is not even a military, but a civilian contractor. And now the United States will say that if you do not give him to us, so that we can put him in jail, we will boycott the Olympics ?! If his name was Eduard Snowdenov and he were from Moscow, or if he were Ismail Snowdenov from Baku, then in the United States they would be considered a hero and a fighter for democracy. As far as the Obama administration is concerned, I consider Barack Obama one of the best presidents I have had during my lifetime. But in the case of Snowden, this administration behaved shamefully.

In general, the levers of control of Russia from the outside jammed. Someone is trying to pour in the oils and give the remote control mechanism a turn, but the mechanics strive to roll in the direction of the taxi drivers themselves and cover them with their heads. Even the gay pride is no longer able to hold and adjust ...

Ctrl Enter
Noticed oshЫbku Highlight text and press. Ctrl + Enter
We are
Geopolitical Mosaic: Jesse Ventura will become US President in 2016, and Putin will turn Europe into RusropResults of the week. “In our cooperative, the board is always agreed”
Military Reviewin Yandex News
Military Reviewin Google News
130 comments
Information
Dear reader, to leave comments on the publication, you must sign in.