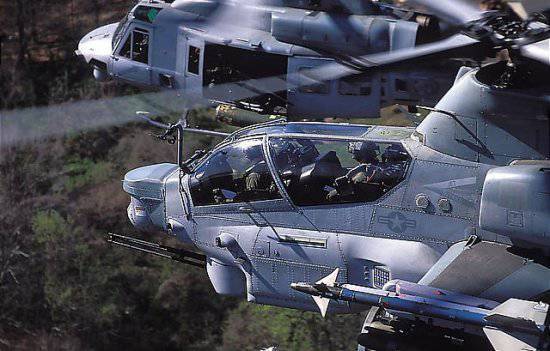 The family of American rotorcraft "Cobra", previously left the army Aviation, remains to serve in the Marine Corps. The new version of the shock AH-1 is approved and will be adopted.


In the coming decade, these helicopters will be 50 years old. Having completed its first flight in 1967, the hard-working AH-1 Cobra helicopter still remains in service. The US Army has already abandoned it in favor of the more “advanced” AH-64 Apache, while the American marines, who have fallen in love with this car, are putting into service a new modification of it - AH-1Z Viper (“Viper”), also known as Zulu Cobra ( per letter denoting a modification). 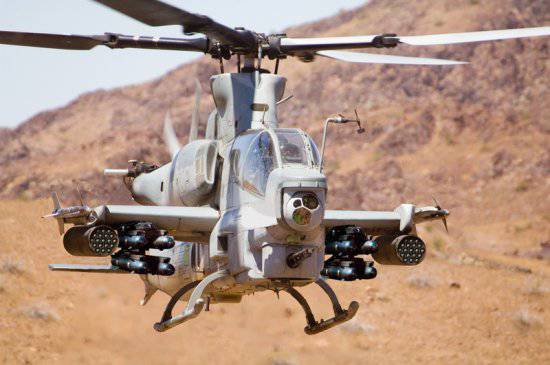 The development of the "Vipers", then still bearing the nickname KingCobra, began in 1996, when the Marine Corps adopted a helicopter fleet modernization program. It provided for the replacement of 180 AH-1W SuperCobra helicopters with AH-1Z (with the purchase of new machines or modifications available), and about a hundred of multi-purpose UH-1N helicopters with UH-1Y Venom. The Viper made its first flight in December 2000 of the year and then within ten years it was gradually brought to mind, until finally in December 2010 of the Marines decided to finally put the helicopter into service.

The rotor wing mass has increased significantly (8390 kilograms of maximum take-off weight versus 6690 kilograms of the Supercobra). In many ways, this is why the main constructive difference between the Vipers is the new four-blade composite rotor, replacing the two-blade predecessor, traditional for the Hugh family of machines, has exhausted its ability to keep the Cobra heavier in the air. The tail screw was also four-bladed. Fully transferred to the modern element base avionics: analog flight instruments "Superkobr" gave way to an integrated control system with two multifunctional liquid crystal displays in each cabin.

In terms of tactical capabilities, the Viper differs from the Super Cob by almost three times the increased combat radius (200 kilometers against 70) and increased speed. The composition of the airborne armament itself has hardly changed: the same Hellfire, Hydra, Saydarma and Sidewinders. However, the new sighting system allows you to select targets at distances greater than the radius of the onboard weapons. At the same time, the use of guided missiles has been radically simplified - the Supercob pilots constantly complained about the need to switch to launch the Hellfire about fifty toggle switches in the correct sequence. 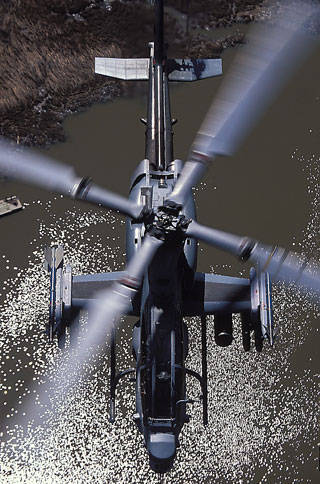 In addition, on the "Vipers" they installed the FLIR infrared front hemisphere infrared system, similar to the one with which AH-64 Apache is equipped. At one time, one of the main claims to the "Superkobram" was the lack of such equipment. Added and helmet-mounted targeting complex Top Owl Corporation Thales, allowing you to perform combat missions in difficult weather conditions, as well as at night.

At the moment, the Marine Corps has already received 11 such helicopters. All in all, by the 2021, the Marine Corps Command plans to have the 189 "Vipers": the 58 new rotary wings plus the 131 AH-1W SuperCobra reequipped and re-equipped machine from those in the ILC. The cost of the entire modernization program of nearly three hundred Super Cob and Hugh, as well as the purchase of new helicopters by marines and the US Navy will exceed 12 billion dollars.

That is characteristic, the principle of production economy is not forgotten. The hull systems, the avionics and the Vip unit propulsion system on the 84 percent are compatible with the already mentioned newest UH-1Y combat support helicopters, which greatly simplifies maintenance.

The issue of direct aviation support from the ILC is quite acute. It was originally planned to replace part of the retiring AV-2010B Harrier II attack aircraft with the F-8B Lightning II multi-purpose fighter aircraft with a short take-off and landing, by 35. However, delaying the deadlines for the delivery of the fifth generation lightning and the significant increase in the cost of its development actually deprive the US marines of air strikes. The slowness of replacing the Harriers with new cars (cautiously suggesting that it will begin in the 2013 year) imposes an increased load on KMP helicopters.

In this regard, the modernization of the Supercobra to the Vipers, in addition to the obvious increase in the combat capabilities of the helicopter gunships, can be viewed as a palliative way out of the emerging impasse. Increased range, radically revised avionics and integrated weapons control systems will effectively suppress the enemy when the marines come into direct contact with him.

The tendency to wash out from the linear composition of old samples of aviation technology, which is well marked in 90 and 2000-e, paradoxically does not apply to some machines. No alternative, for example, is the bomber B-52. Simple, familiar and reliable "Cobra" also became such a weapon. Having received new “eyes” and “ears”, these rotary-winged helicopters will be quite ready to pass over to the sixth decade-free service.