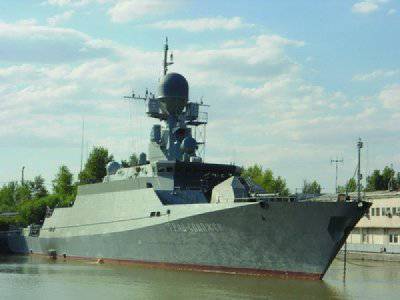 The small missile ship (MRK) Grad Sviyazhsk, built by Zelenodolsky Shipyard, was towed along the Volga to Astrakhan at the end of June of this year and moored at the base for the connection of the Caspian OVR ships flotilla. This unit is still in the testing phase. Our correspondent visited the new ship.

I could not wait to see with my own eyes the “Grad Sviyazhsk” about which our newspaper wrote so often. After all, this is the firstborn, that is, the lead ship of the project 21631 (the cipher "Buyan-M").

The lead ship of the 21631 project received its name “Grad Sviyazhsk” in honor of the settlement Sviyazhsk in the Zelenodolsk district of the Republic of Tatarstan. History This town is covered with legends. According to one of them, Sviyazhsk was erected in 1551 by Ivan the Terrible in just 4 weeks. This place was used by the Russian tsar as a stronghold from which the troops later went on to besiege the capital of the Kazan Khanate. More than four and a half centuries have passed since then, but Sviyazhsk exists to this day.

It was the Red Star who first wrote about the background to the creation of the “Grad Sviyazhsk” MRK. Let me remind you that in our newspaper in the 9 issue of December 2009, an interview was published with the pioneer in the development of the “Buyan” project, the commander of the Astrakhan IAC, Vladimir Cherokov. Here is how he responded then about his prototype ship: “I believe that this ship is unique in its kind. The armament is good: 100-mm bow gun, salvo fire, autonomous self-defense module, modern air defense systems. The Navy of other Caspian states has nothing of the kind. ”

At the same time, Vladimir Cherokov expressed his wish: “What would I like to offer as an improvement to this project? Strengthen firepower, so that the ship had its own missile systems. But since we do not have rockets, we are still second in firepower after the flagship of the Caspian flotilla of the Tatarstan missile ship. And the designers of the ship part would like to express the following wish: for the equipment to be more reliable and easy to operate. ”

In 2010, as part of the program to modernize the Russian Navy, the domestic shipbuilding industry was tasked with creating a missile version of the Buyan project. The tender for the construction of ships of the 21631 project, in which nine shipbuilding enterprises participated, was won by the Zelenodolsk Shipyard in May 2010. 28 May was signed a contract for the construction of ships of this series. The talented designer Jacob Kushnir took on the task of state importance in creating the missile version of the “Buyan”. Less than three years later, the MRK Grad Sviyazhsk was launched by shipbuilders into the water. 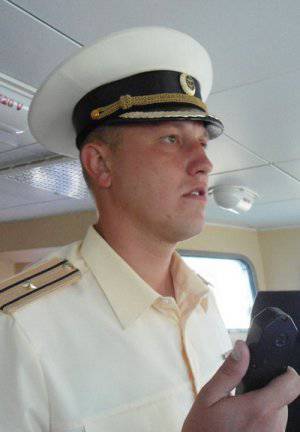 From the high bank in front of me opened the view to the Volga backwater, where the handsome Grad Sviyazhsk, the younger relative of the small artillery ship Astrakhan, so to speak, froze at the floating pier. There are a lot of common features between these projects. They are traced in the contours, contours, elements of the superstructure. The main similarity is that the same diesel engines, as well as water-jet propulsion units, are installed on the ISCs. But still, in terms of their performance characteristics and purpose, these are different combat units. The main difference is in size. In terms of its parameters, MRKs, whose displacement is 949 tons, length is 74 meters, draft is 2,6 meters, exceeds their artillery counterpart, whose parameters are much more modest.

In terms of its strike power, the ship ship “Buyan-M” is not much inferior to the new rocket ship 2 of the rank “Dagestan”, which became part of the flotilla last year. But "Dagestan" is the first ship in the Navy of the Russian Federation, which is armed with the newest missile complex "Caliber-NK". The IRA "Grad Sviyazhsk" also has a Caliber missile system capable of launching several types of high-precision missiles both on surface and coastal targets at a distance of up to 300 kilometers. The ship’s artillery is represented by a bow artillery installation, the AK-620 Duet anti-aircraft artillery complex and two pairs of machine-gun installations. The ship is equipped with modern navigation equipment, as well as radar and electronic equipment.

On the upper deck of the ship, I was met by the commander of the IRA "Grad Sviyazhsk" captain 3 of rank Alexei Gordeyev. We go around with him the ship, which is still at the final stage. Still not everywhere covered with paint deck, superstructure. Inside the ship, you can see representatives of the plant. These are experts from the team, together with the military personnel of the ship’s crew, are preparing Grad Sviyazhsk for sea trials.

Aleksey Gordeyev was appointed to the post of commander of the newest leading ship of the Buyan-M project not by accident. This officer at the flotilla command on a special account. When approving his candidacy at the beginning of the year for the post of commander of the new MRK, it was taken into account that during his fleet officer service on the flotilla, starting from 2005, Gordeyev successfully commanded ships of various classes. During his time in command, the Astrakhan IAC repeatedly won the title of the best for the period of study and for the academic year in its formation and in the flotilla, fulfilled all the missions of the voyages without accidents and breakdowns. The crew of “Astrakhan” was noted by the higher command following the results of the maritime part of the joint strategic exercise “Center-2011”, and last year the IAC excelled at the Kavkaz-2012 SKSHU.
Alexey Gordeyev readily answered questions from the Red Star correspondent.

- For the development of a new ship, the crew is usually formed, as they say, with the world a thread. What ships of the flotilla delegated their specialists to the ISCs?

- The crew of the IRC “Grad Sviyazhsk” is 100% staffed by contract servicemen who had previously served on warships of surface ships, which is deployed in Makhachkala. On "Tatarstan", "Dagestan", missile boats. The personnel have a good sea practice, experience of the ship service, which is very important when accepting a ship at the factory, when mastering new equipment and weapons.

- Which of the subordinates is the support for you during the acceptance and development of the materiel of the ship?

- A large amount of work together with representatives of the industry on the upper deck, superstructures and sides of the ship is performed by the boatswain foreman of the 2 th article Rasul Abdumenzhidov. Among the ship mechanics would like to mention the engineer CU-5 Lieutenant Dmitry Popovich. A machinist senior sailor R. Zamanov, a senior technician R. Hasanov work under his leadership. People are well aware that any unresolved defect or unnoticed deviation in the operation of the mechanism is fraught at sea with a prerequisite for an accident, for the disruption of the performance of a combat mission. Therefore, now, in preparation for the running tests, the serviceability of each node and mechanism, all sections of pipelines for tightness, and resistance to vibration are checked.

Our conversation was interrupted by a factory specialist, who had arrived at the commander’s cabin to check the console of the in-ship communications. After checking the operation of the device, he asked the ship's commander to test his readiness for work himself. And now, along the ship, Gordeev’s voice was repeatedly amplified, inviting one of the shipbuilding engineers to his cabin.

In August, the small artillery ship "Grad Sviyazhsk" must make the transition across the Caspian Sea to Makhachkala, to the location of the brigade of surface ships, where it will be held its state tests, acceptance into the flotilla. Perhaps, for the first time in the post-Soviet history of the Caspian flotilla, running and state tests of a new ship are carried out on the Caspian Sea.