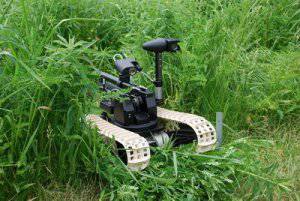 This is one of the main goals of the robotization of war.


Abroad, the creation of robotic complexes is considered as one of the important directions of development of military equipment. The most intensive development of ground-based military robots is conducted in the United States. This is told by a military expert, Colonel Viktor RUSINOV.

CURRENTLY ground robotized complex consists of a remotely controlled machine and a control panel. According to the degree of automation, the machines can be remotely controlled as well as autonomous, that is, they can act on a program previously installed in the on-board computer. According to the functional purpose, they can be divided into reconnaissance, engineering, combat and rear.

SpyRobot and Dragon Runner wheeled reconnaissance vehicles were widely used in the US Army and Marine Corps. The main tasks assigned to these unmanned complexes are: reconnaissance in urban environments, the use of sensors for various purposes in a given area, participation in search operations, reconnaissance of possible ambushes and the detection of weak points in the enemy defense. 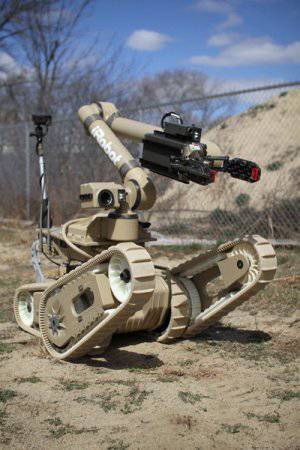 Dragon Runner, which appeared as a result of upgrading the SpyRobot machine, can conduct reconnaissance of the area in the radius of effective firing range of a rifle weaponsmoving at a speed of 10 km / h. The 9 kg unit is equipped with infrared sensors for working at night, a small-sized video camera, a microphone and is carried in the back of the body without slowing down the pace of movement of the fighter and without affecting the equipment of his backpack with food, water and ammunition. The car can move.

To perform engineering tasks, an additional number of instruments are needed, the mass of which requires a more powerful and large chassis than that of the Dragon Runner. An example of such devices - the Warrior 710 weighing 157 kg without a battery and additional tracks - can be considered a multifunctional reconnaissance-engineering machine. It is designed to detect, transport and decontaminate explosive objects, clearing debris, making aisles and lifting weights.

In the US, there are heavy unskilled engineering vehicles. The demining machine MV-4 (or M160) weighing more than 5 tons is intended for the disposal of anti-personnel mines and unexploded ordnance. Its remote control is provided at a distance of 2 km.
An example of a remotely controlled mine clearing vehicle is also the ABV (Assault Breacher Vehicle) model. In terms of dimensions, this machine is comparable to a tank Abrams.

Intelligence remote-controlled vehicles equipped with small arms or melee weapons, called martial. Their development is being carried out as part of the SWORDS (Special Weapons Observation Reconnaissance Detection Systems) program - a special combat surveillance and reconnaissance system. At present, the Talon UGV robot armed with a machine gun is used in Iraq. It is also possible to install an 40-mm four-barreled grenade launcher with 48 grenade ammunition instead of a machine gun.

The largest combat robot at the present time can be considered a Black Knight machine with a mass of 9,5 tons. The control point of the robot can be placed in the KSHM or other armored combat vehicle with special equipment. The operator has the ability to control the device from the ground, observing it visually. Armament includes 25- or 30-mm automatic cannon with a paired 7,62-mm machine gun.

WITHIN THE FRAMEWORK the development of the technological base of robotic facilities in the US military is given primary attention to energy supply issues. It is about creating new generation of batteries - reducing their weight and size parameters with increasing power.
It is assumed that the machine in the near future will be able to find and use energy sources without the participation of the operator. To this end, it is planned to create equipment that will ensure recognition of the energy source and identification of the type of fuel.

The second parameter for evaluating robotic systems is their ability to function in difficult conditions. In many ways, the effectiveness of robots depends on “sensitive elements”. By the 2015-2020 years, it is planned to create all-weather sensors that will ensure the independence of the quality of work of robotic, primarily reconnaissance, means from weather conditions. The presence of precipitation or strong squally wind should not reduce the likelihood of a correct assessment of the situation by the operator. 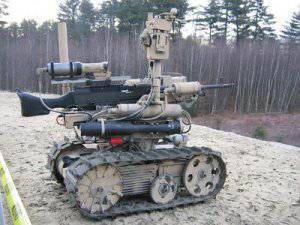 Currently, robot equipment can recognize a person to one degree or another only when the carrier is stationary. By 2020, the robotic tool is likely to be the recognition of a person in motion. After 2030, equipping them with biosensors will allow, almost without reducing the speed of movement, to isolate and classify a person and an animal (for example, a service dog) among moving objects. To realize this opportunity, it is planned to create sensors that perform the functions of the organs of hearing, sight and smell.

By 2020, a robot assistant will accompany a soldier (like a service dog). It is assumed that the technical means will be controlled by voice and / or gestures. At the same time, the physiological features of the person controlling the robot must be laid down in the memory of the equipment, which is necessary to eliminate unauthorized influence on the operation of this tool by other people.

EXPECTEDthat after 2030, executive robots will play an important role. Such a device will be an intermediary between a serviceman-operator and a group of various kinds of specialized unmanned vehicles capable of exchanging information with each other. Having received a task from a person, the robot leader automatically forms and distributes commands for similar technical means managed by him. At the same time, the information on the activity of the robot leader can be reflected on the operator’s control panel, and its teams can be corrected by the operator. 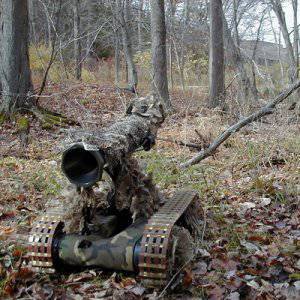 At the same time, the device will be able to function autonomously after receiving a task from the operator. The robot leader will receive signals from the devices, process them and transmit to the operator’s control panel, or report his decision in another way, for example, by sound or light signal.

The further development of means of navigation and orientation in space in robotic devices is to create hardware and software tools that would ensure not only the analysis of the current situation, but also the prediction of the possible position of moving objects.

In addition, by the year 2020, it is possible to create artificial mechanical devices that have the flexibility, elasticity and sensitivity of human muscles, but with greater strength and durability for propulsion elements and manipulators.

By 2030, we can expect that hybrid biomechanical systems will be used as drives for various purposes, including manipulators. Manipulators, not inferior in their capabilities to man, are planned to be created already by 2015. Manipulators with superhuman capabilities can be created no earlier than 2030-2035's. Presumably, they will be made of high strength polymeric materials.

Even now, several thousand robotic systems for various purposes are in service with US ground and marine infantry units. Their main purpose is the exploration and execution of engineering tasks. The role of unmanned vehicles with fire weapons on board will gradually increase. Reducing casualties among military personnel is one of the main goals of using such tools on the battlefield.