August 12 2013
30
At ten o'clock in the morning I climbed up to the viewing platform of the Alaba landfill. Thirty military men were already crowded there, equipped with walkie-talkies and armbands, for example, such as: “Imitation Assistant” and “Deputy Head of the Directorate”. 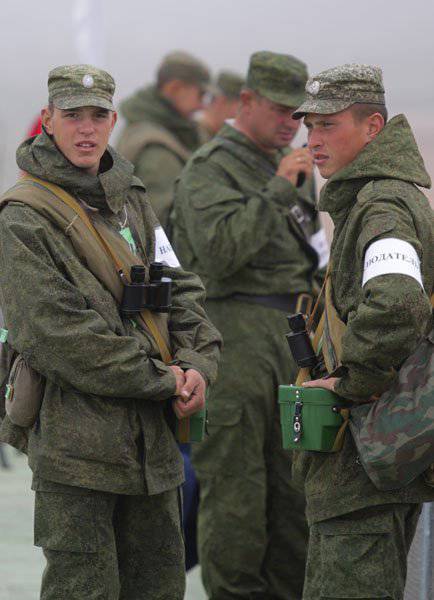 An extraordinary view was opened from the site. Four lined up in the foreground tank: red, blue, yellow and green.
In the back - stretched plain with man-made mounds and potholes. There was a warm breeze, but the faces of the military were gloomy. The plain was enveloped in fog, in which neither targets nor the roadway — two important components of biathlon — were visible. The main component was also missing - First Deputy Minister of Defense Arkady Bakhin, who, judging by military patrols on the highway, was eagerly awaited. 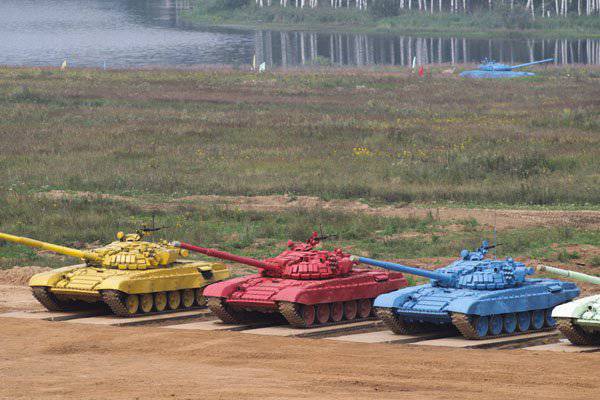 While the judges were deciding what to do, I talked with a member of the organizing committee of the competition - a reserve colonel, who for some reason asked not to publish his last name.

- Why did you come up with a tank biathlon? - the colonel explained to me. - In order to show the spirit of rivalry in the troops. To get away from the daily army routine. Before, how was the training? I drove up and shot back. And then there are obstacles, and fire training, and in general - they are fighting with each other! 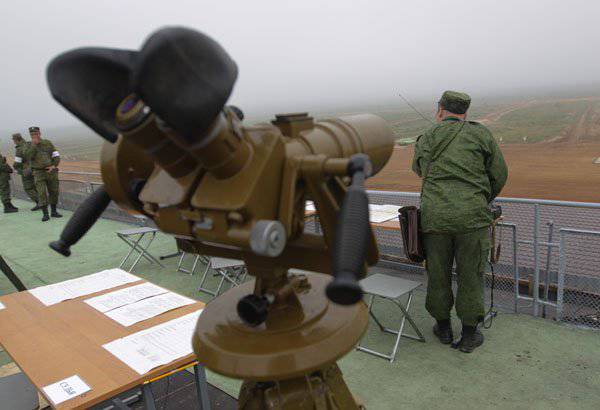 The epidemic of tank biathlon swept the army in July: in each district, we selected three of the best tank platoons to arrive at the final in Alabino. First, the judges will choose the best tank crew in Russia. And on August 17 the final stage of the competition will be international. Russia, Armenia, Belarus and Kazakhstan will fight.

Today's test rides imitated exactly the international stage: the crews of the “four countries” had to go through a small circle with an obstacle course and shoot at targets. The races are done in order, the colonel explained, in order to check in action the T-72B tanks on which the visitors would fight.

But the deputy minister did not go. I went to the command post, where the leaders of the competitions sat in severe silence: Lieutenant General Yuri Petrov and Ivan Buvaltsev. On the table, I found a script with the following passage: “Announcer: A howitzer slowly but surely raises the barrel of the cannon to the maximum angle of elevation! Something will be now! Take care of your ears! Here is a volley! Caramba! ”

Then the command “In places” was sounded - apparently, the deputy minister conveyed that he would not come. The test rides began with entertainment numbers: the announcer shouted a greeting into the microphone, tedious music began to play, and a group of young men and women ran out onto the concrete bridgehead in the center of the training ground. "Dancers," they explained to me. 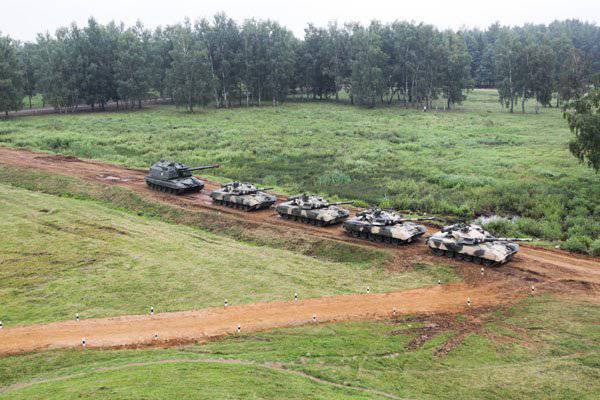 Following it, four spotted tanks appeared, which formed a figure like a flower and began spinning and swaying their tools coyly. The dancers, as if on cue, pulled out their mobile phones and began to photograph the ballet. 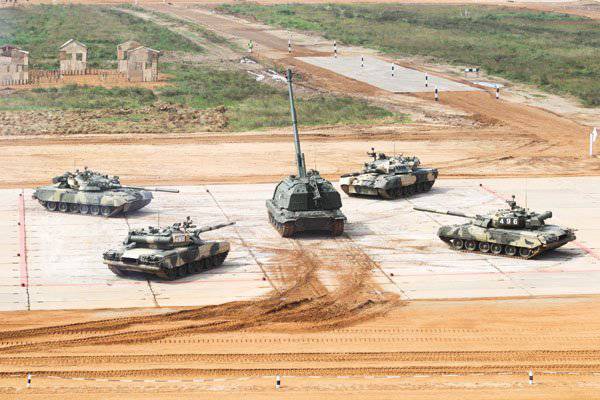 - I do not understand? Why don't artists dance? What are they, tanks came to shoot? - suddenly cried out, Lieutenant-General Petrov.

“They don’t hear any music there,” explained from the corner.

They began to regulate the music, which was difficult. The announcer yelled into the microphone that he did not hear himself. The dancers, to whom fragments of the “Saber Dance” were heard, tried to dance, but it was clear that the roar of the engines blocked other sounds. However, after five minutes, the music was forgotten: a howitzer rolled out onto the ground and exactly according to the scenario slowly but surely raised the barrel of the gun. A volley burst out, so that the announcer forgot to shout “Caramba”, and one of the dancers (I saw it through binoculars) collapsed on the concrete next to the howitzer, clasping her head in her hands. 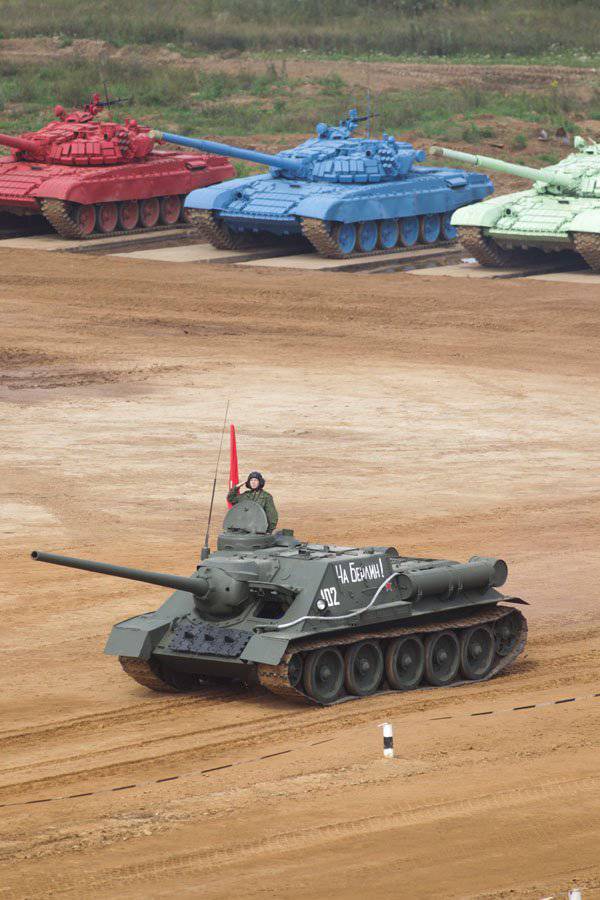 Finally it is time for biathlon. I returned to the observation deck, where the judges were already sitting at the tables, and behind them were observers lined up - each with a stereo tube.

- “Armor”, at the start! - spread on the walkie-talkie. Multi-colored tanks revived, roared and shrouded in clouds of smoke. 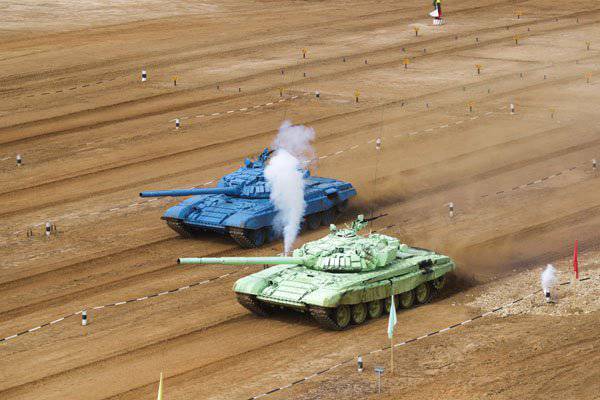 Without any difficulty having passed the test of the "snake", the tanks lined up at the firing line and began to load the guns with anti-tank missiles. The first target was a full-size model of the tank. He stood two and a half kilometers from our site, and, in my opinion, it was impossible to see him. Apparently, the crew of the red tank was in solidarity with me: out of three shots, he did not hit even once and was sent to the “penalty circle”.

At this time, other tanks had already overcome obstacles: the ford, the track bridge, the escarpment. Everything was going well until they started defeating the second target - the helicopter mockup. He was fired from an anti-aircraft machine gun from a distance of 1600 meters.

- Why did the blue tank stand up on someone else's place? - suddenly zamatilas into the radio of the deputy chief of staff of the competition. - He has spent someone else's ammunition! And what about the results? - He turned to the observers.

Those, looking up from the stereo-pipe, began vividly reporting and arguing. Some said that green has a hit, others - what is not. This finally brought out the deputy chief.

- Right now, I gulped all break! - he shouted, blocking the voice of the announcer from the speakers, who shouted: “Bis, bravo to the virtuosos!” - The results are fast for me!

- There is a hit! - chorused the observers. 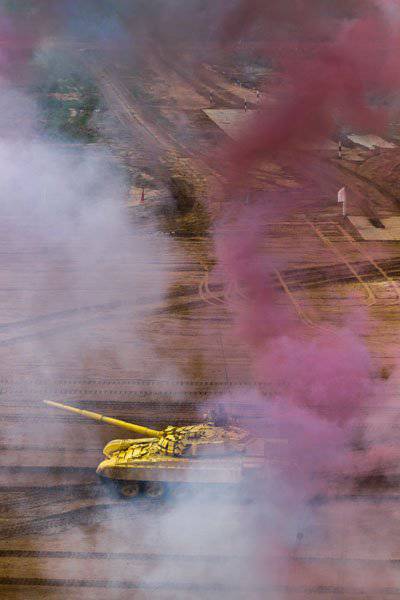 On the third lap, the green and blue tank managed to go side by side partly, one nearly cutting the other. The commentator was delighted, but the faces of the judges did not bode well. To top it off, the blue tank suddenly stopped.

“It seems the automatic machine of the charger has failed,” said someone on the landing, listening to the radio.

Malfunction, however, eliminated. Tanks shot out at the third target in the form of a hut, went through the rest of the circle and lined up in front of the command post. The leader of the test race was the yellow tank, which went through the whole stage in 5 minutes 28 seconds.

One by one, the tankers climbed out of the hatches and, running through the parade ground, lined up at the entrance to the command post. From the observation deck, their heads were visible in round helmets that waved like sunflowers. Before the sunflowers stood the chief of staff of the competition and his deputy. There was an oppressive silence. Lieutenant-General Petrov left the command post. He spoke so softly that I did not hear a word. Then he turned and went back to the CP.

- Got it? - wearily asked the deputy chief of staff of the competition. Heads froze at attention.

When I came down from the tower, silhouettes of tankers suddenly appeared on the slope of the mound. After a difficult test, they returned to the unit and, judging by the fragments of phrases that the wind brought to me, they made their own analysis of the races.

“You cut the road for sure,” one said wistfully. - Well, what the fuck did you get out?

- In short. Please do not slow down next time, - summed up the third. - Otherwise you have to repair two tanks. I understand in competitions, but now why? 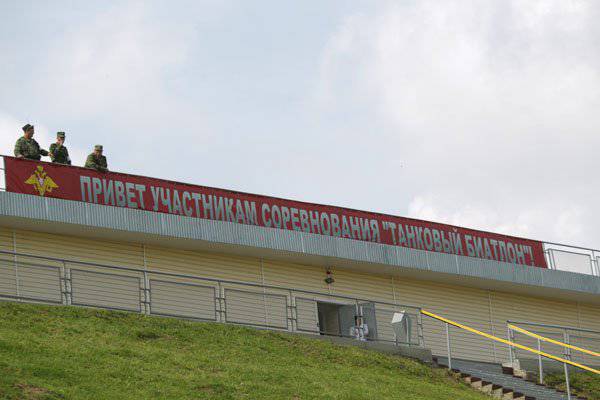 By quarreling, they disappeared from view. Platz was completely empty, only the army tent stood alone with its canopy folded back. It was dark inside, and a streamer stretched out in the wind outside: "Welcome to the Armed Forces of the Russian Federation!"

Ctrl Enter
Noticed oshЫbku Highlight text and press. Ctrl + Enter
We are
President of the Federation of Tank Biathlon A.N. Stolyarov: “The creators of World of Tanks are going the right way”Tank biathlon for crews of the Western Military District
Military Reviewin Yandex News
Military Reviewin Google News
30 comments
Information
Dear reader, to leave comments on the publication, you must to register.