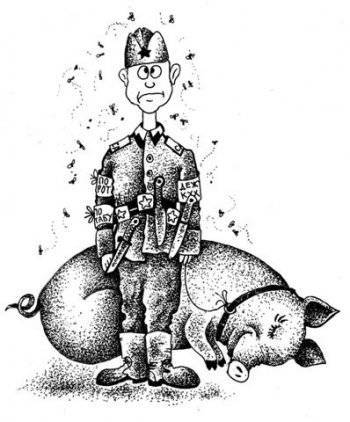 Suddenly out of schedule
A misfortune happened ...
V.Vysotsky

From time to time, the army calls the “general effect” a situation where everything seems to be going on, going in the usual way, maybe well, maybe a little worse, but, in any case, not bad. But it is worth the high authorities to pay their attention here - drain the water! Everything went KOVYRKOM! About one such stories will go the story.

For many years in a row, an anti-aircraft missile division was located on one northern island. What did people do there? Yes, the same as all the Air Defense Forces stationed on a thousand of the same "points" survived. And during a short summer respite they were preparing for a new period of survival.
There was nothing special on that island - sand, woods, swamps. Coast rugged by pourers, goose-duck kingdom, mushrooms and cranberries, and blueberries with blueberries. And another mosquito ringing drowning diesel engines. But this grace is only in summer. In the winter ... But this is not the point.

Some uniqueness of the dislocation of the division was that such an island existence is not uncommon for our erteveshnik brothers. At the same time, the ZRV has always led at least some way to deliver missiles from the technical division. So that, in the event of a battle, after the shooting of the main and spare ammunition, it was possible to bring a new one. Well, or screw it up from there, in a quick way, until the liquefied adversary in response has not rolled the complex into small pieces of iron.
On the island, as you know, one road - by sea. Everything that was needed was delivered to the navigation delivery - flour-stew, coal-diesel, valenki-ZIP-potato-medicine, and sometimes with one steamer. Ka-a-ak will be dumped from the board with such a special conveyor on the sand all this wealth and it’s good if you guess right at the moment of tide. Then there is a chance that at least something to take out and drag off — on the White Sea, ebbs and flows every four hours. Happened, did not have time.
The head of the ZRV division grumbled:
Half of the plants in Northern Norway are already working on your coal! Scientists are learning a new kind of black flounder.
The total supply of abundance was barely enough until the next navigation. Yes, and thoroughly pall, canned concentrates. In the beginning of summer, the extraction of something fresh began. They even carried out a large-scale search of the shore for the collection of cormorants. Returned satisfied, droppings all obdazhennye, with rich trophies.

In such a period, occasionally high guests from the division and army headquarters would hunt and fish. Beauty is an island in the border zone, there are no outsiders.
In addition to us, anti-aircraft gunners, rocket officers, officer wives and small children, no one else was on the island. Hares, swans, black grouses were in abundance, the wolves in the winter sometimes ran. And more - not a soul! And this wonderful piece of land was called Kumbysh Island (accent on the first syllable).
So they existed - they lived in the summer, survived in the winter. And there is no spring and autumn in the North, instead of them - also late and early winters.
In our unit there were two cargo-passenger boats of the Yaroslavets type (one we then safely drowned), which no-no, yes, they threw us mail, fresh vegetables shrubs. Less often, it happened, flew a helicopter.
In addition to the battalion, there was a technical battery attached to Qumbisha. Let the experts not be surprised - the road, I repeat, there was no island, so the storage of additional BCs, assembly, equipment, and other operations on the process stream was carried out not by the technical division, which was located on the “Big Earth”, but its small counterpart. Each unit has its own position, its own equipment, and the residential town has a common - shield barracks, food blocks, well, there are boxes, a stoker, a water tower, and two dos-boards - pretty two-story brick (!) Houses on 16 apartments each. Nothing, you can live. Caulk the windows, insulate the door, release air from the heating system, and tap water from the tap in a thin stream so as not to freeze by chance - live and rejoice! There are worse conditions.

I am telling these details so that the reader understands why any arrival of the vehicle, to hell with it, even with the authorities, becomes, if not a holiday, then an event not ordinary.
Mail, fresh products, new faces mean a lot to people living in isolation, without communication, without any special impressions. On ordinary days, everyone who could - soldiers, children, officers, women, dogs ... came running to the helicopter. But an unusual helicopter flew to the island. More precisely, the “spinner” was just the most ordinary, hard worker Mi-8. The composition of the passengers was unusual. Not ordinary, just to say, there were passengers.

About this case, which happened years in 10 or a little more than before my appointment to Kumbysh, old-timers orally conveyed, as a legend, the old-timers, each time adding new details, slightly accusing, slightly embellishing, omitting something. I will try to restore the main essence of the event.
In the times described, and it happened at the beginning of 70's, two air defense systems were deployed on Kumbishe - С-75, С-125 and another technical battery. Man under a hundred, maybe a little more, fighters, a dozen three officers, families.
The town was a handful of "pre-cut" barracks. The rest of the buildings were also not an example of architectural refinement and construction refinement.
The air defense forces settled themselves "happosobom." And what, most importantly, who can "grab" on an uninhabited island?
Yes, it was still a subsidiary farm (as without it?), For our story is an important detail. Kept pigs pigs, one or two cows, guard dogs. The soldier was caring for the farm, which in the staff book was listed in the column “guide dogs”. In the evenings, he took his dogs to the posts, put them on a chain, picked them up, fed them and locked them in the morning. The rest of the time - the pigs and cattle. He slept there, on the "farm", he had a separate enclosure. Perhaps the happiest man in the division!

In general, the islanders, like many at the “points” of air defense, lived hard, but, in any case, not worse than many.
Both divisions and technical batteries were, in fact, independent units, each subordinate directly to the commander of the Severodvinsk brigade, but the commander of the seventy-fighters division, as the largest unit, was considered the head of the garrison on the island. We will continue to call him that: commander.
Well, now, the story itself.
Somehow the 10-th separate army visited the Commander-in-Chief of the Air Defense Forces Marshal of the Soviet Union PF Batitsky The colorful personality, veterans of the troops remember him well. The participant of the Great Patriotic War, the Hero of the Soviet Union, the organizer of the creation of the rocket and space shield of the country, who did not drift, according to rumors, arrest almighty Beria, he was a thunderstorm for negligent commanders.
Diligent, by the way, too, sometimes got hard from him.
Well, then, one wonders, why the devil carried him to inspect the rank and file and unremarkable unit? Comrade Marshal, because you are the Commander-in-Chief, if you have come to the troops, so is your place in the headquarters, in the army’s command post. If there was a hunt for cheating anyone, at the Military Council you can “stick” anyone. As a last resort, look for an hour in the regiment which or in the brigade - there will be stuttering five more years after your visit. But why in battalions-divisions, then why? The people there are wild, not trained to polish.
It seems that the whole story happened on a day off, when the marshal was offered a break from the labors in the fresh breeze, with a shotgun, and with a wire. This is now the higher ranks are more and more fond of tennis and skiing. It seems that they will soon expect their new hobby - they will learn to photograph.
And at that time the nation and the army were led by a stern, undemanding people. They smell the powder was not new. And where in the summertime you can hunt not for trophies, but in order to relieve the tension? The birds flew over, sat on the nests, come and agree with some hunting!
And on Kumbyshe hunting season, no one ever opened, and there was no one to close it. All year round there season. I say, manners are wild.
Of course, there are quite a few places in the Arkhangelsk region for such a holiday, but flying to Kumbysh is a trifling matter. This is by sea or on ice you can get all day, and by air 30-40 minutes.
Means, it is decided - we go! At the same time, let's see what the troops live there, what difficulties they experience, how they cope with them.
Probably, one way or another, the high leaders thought, getting into a helicopter.
Well, the helicopter is not a motorcycle for you, when I wanted to start, go.
Some preparation for the flight should be, again, to coordinate the span with its own air defense forces on duty.
In general, it is clear that such a person does not fly away incognito. They reported to the island that for the "guests" fly. Well imagine how this could happen. Communication with the guys was only on the radio. For negotiations, a special veiled military aesopian language was used. In addition to the established coded signals, such abbreviated reports and instructions from the Manual on Combat Training and the Combat Manual were used, only allegorical, as it were. And so for other negotiations such idioms were generally used ...
It was believed that stupid NATO, listening to us, can not understand anything. I don’t know how it was cleared up by the enemy, but sometimes we didn’t understand ourselves. There could be a dialogue like this:
38! ... 38! (when I was, the call sign of our division, then my comments in parentheses).
Listening to 38! (the duty attendant answers).
363-th on the link! (one of the call signs of subunits and units commanders changing from time to time).
363-th in the territory. (And where is he to be? Do not sit at all tied at the communications console, and Sunday is still)
... your ... there ... rastuda ... FIND !!
... ...
363-th 38-th in touch!
To you on the edge ..., ugh, damn, on 38, the “dvoechka” flies (“two” any transport, flies, it means - a helicopter).
Got you. Who goes, what luck?
363 is big!
Big? (The division commander? - thinks the commander)
Yes, very big!
So what? What does he need today?
The largest! Most!! 01 is flying !!
01 (Who is this? Army Commander?)
Yes, 01! 01 is big! No, 001-th !! (happy with the found wording and undisclosed military secrets)
001 (Who is this? Minister of Defense? General Secretary? Lord, why do I need this ?!)
001! 001 th to you !! On the big one, on the ba !! (with one star on the chase, the last name begins with the letter “B”)
With one big? On Be? (Major Bogdanov? General Borodin?)
On Be !! Our 01 is with him!
No shit I do not understand! Who flies with whom?
I repeat for the underdeveloped! 001! Big! On the big one! Clear, no? With the coat of arms! On Be !!
Big with big? On the ba with the coat of arms?
… So! ... peretak !! ... 001 th !! The largest!! Our 001! Head flies !!! …Yo Mama…!! MARSHAL !!! …damn you…!! BATITSKY !!! And our commander with him !! As understood, 38? ... How do you understand me, I ask?
Oh ..! ... tons ... rastudy !! Where?! When?!!! (Oh! Looks like he understood.).

Our army knew how to select commanders with a certain business and strong-willed qualities.
To themselves they loved to say:
I am the commander. Dumb but brave!

Thank you, Comrade Marshal of the Soviet Union! "