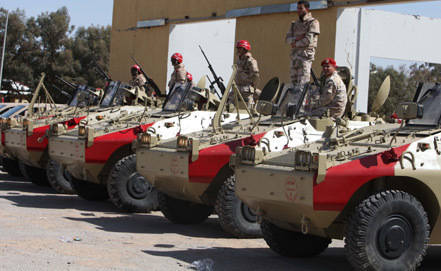 In the capital of Libya, where the security situation has deteriorated sharply in recent weeks, military units and armored vehicles have been introduced to ensure public order.


As was reported on Friday in the country's General Staff, the military presence in the city was strengthened in accordance with a special plan designed to stop the wave of violence that swept the capital and its environs in recent weeks.

The army received the relevant order from Nuri Abusahmain, chairman of the General National Congress - the main legislative body of Libya.

According to the agency LANA, about a hundred armored vehicles, as well as pickups with machine guns and anti-aircraft guns mounted on them, are in different quarters of Tripoli, which became the scene of armed clashes between the units of the former revolutionaries. Law enforcement agencies are not able to stop the bloody clashes.

As Ukrainian doctors working in the city told the ITAR-TASS correspondent, the criminal situation in Tripoli over the past month has seriously deteriorated. "Peaceful people are very scared and afraid to go out in the dark. Armed gangs of criminals literally terrorized the city - thefts and robberies in broad daylight have become commonplace," the agency’s interlocutors said. According to them, "the attackers began to attack cars with diplomatic license plates, and in addition to this, the ex-militia groups, which are trying to find out between themselves, periodically arrange firefights."

According to doctors, "the police are not active in suppressing the activities of criminal elements and investigating crimes, and even get the feeling that law enforcement officials themselves are afraid of criminals." "Many residents of Tripoli were in despair and fear, people realize that there is no place to wait for the defense," they said.