72 of the memory of the minesweeper "Fog" 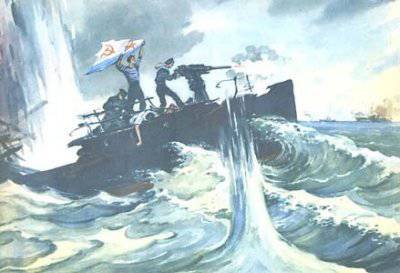 Passing Kildin Island, ships of the Red Banner North fleet lower flags and give a long beep. 69 ° 33'6 "north latitude and 33 ° 40'20" east longitude - the coordinates of the place where the patrol ship Tuman heroically died on August 10, 1941.


Before the war, it was a fishing trawler RT-10 "Winch". From 1931, ten years on the "winch" fished in the Barents Sea and the North Atlantic. On the very first day of the war the RT-10 was mobilized and converted into a patrol ship. A part of the field equipment was removed from it, and two 45-mm guns were installed on the forecastle and aft superstructure. On the wings of the bridge were placed two anti-aircraft machine guns "Maxim". Shelves with depth charges and smoke bombs were installed at the stern. Already 26 June 1941 of the year on the "Fog" was raised a naval flag, and 29-th his crew received the first baptism of fire. The ship sailed from Murmansk to the main base of the Northern Fleet Polar. Because of the coastal hills, a German U-88 bomber jumped out. the fire from the "Mist" made him turn.

In early July, the Northern Fleet command squadron 1941 formed a squad of “Thunderstorm”, No.54, and “Fog” patrol ships, as well as two minesweepers, three MO type patrol boats and several motobots to support the ground forces.

On the morning of July 6. 1941 of the year, our ships, under the cover of fighter aircraft, successfully landed troops in the West Liza area and held it with artillery fire. The paratroopers in a fierce battle rejected the fascists on the west bank of the river and joined up with army units advancing from the front.

During this operation, the crew of the Mist acted selflessly. At the time of the landing, the boatswainer of the ship Alexander Sablin and the sailor Philip Marchenko got into the icy water and, putting heavy gangways on their shoulders, allowed the rest to jump right onto the shore. When Marchenko was seriously wounded, he was immediately replaced by the head of the second article, Ivan Volok. The “Mist” gunners, showered with a hail of fragments from exploding bombs, fiercely fired at coastal targets. The operation was successful.

5 August "The Fog" began an independent patrol service on the island of Kildin-Cape Cape-Navolok. In the logbook began to appear records about the discovery of the enemy's submarine and its bombing, then about the shelling of German planes flying over the ship.

On August 9, the OVR Headquarters (Protection of the Water District) received an extract from the order of the People's Commissar of the Navy of the USSR No. 01457 from 28 in July 1941 on assigning the next military rank to the commander of the TCR Tuman, Lieutenant L. Shestakov. Did the commander know about this?

On the fifth day, August 10, in 3 hours of the morning a German reconnaissance aircraft flew over the ship at a low altitude. In 3 h 1 min "Fog" said on the radio: "One enemy bomber course 90 degrees, height 100 meters."

4 hours 25 minutes the “Fog” signalman noticed three enemy destroyers on the horizon. Obviously, it was this aircraft that brought fascist destroyers to the patrol ship. They moved in a tight formation towards the sentry. Further events unfolded rapidly. The “Fog” commander, Lev Alexandrovich Shestakov, raised the alarm and led the ship at full speed towards our coastal batteries to Kildin Island. Noticing the maneuver of the patrol ship, the Nazi destroyers increased the speed and after a few minutes, approaching the “Fog” at 25 cable distance (4,63km), opened fire on him with volleys of six guns, two from each ship. The forces were clearly not equal. But the crew of a small low-speed patrolman, who had only two light guns, without flinching, entered into combat with three new destroyers of the “Raeder” type, each of which had five 127-mm guns in service and could develop 36-node speed (66,7 km /hour).

The first volley of the German ships turned out to be migratory, but the fragments of one of the projectiles that exploded near the side interrupted the antennas. The ship was left without radio. Shooting, “Fog” tried to hide behind a smoke screen, but it failed: it was carried by the wind. The first holes appeared in the hull. The following destroyer volleys caused a fire in the stern, damaged the steering, demolished the chimney, and then damaged the forecastle, bridge and wheelhouse. Several people from the crew were killed and many injured. The air wave threw overboard the commander of the ship L.A. Shestakova - it wasn’t possible to find him later. On the right wing of the bridge, the commissioner of the ship, Senior Political Commissar P.N. Strelnik, who was returning from a round of combat posts, was killed with a shrapnel to the head. The command of the ship took over Lieutenant L.Rybakov. During the battle, Lieutenant MM. Bukin, knowing that the Naval flag was lowered for the night, ordered him to be raised; the helmsman of the Red Navy, KD Semenov, who had a serious wound in his hand, and the radio operator, the senior Red Navy soldier, V. Blinov, raised the flag under the fire of the enemy.

The enemy destroyers fired 13 minutes and, before 4 hours, 55 mines, made up to a dozen of six-guns. "Fog" got 11 direct hits. The shells pierced through the hull of the ship, were torn in the boiler room, in the superstructure, on the forecastle, demolished the chimney, smashed the cargo boom. Despite the great damage and the growing fire that engulfed all the superstructures, the sailors and officers held firmly. The Mist gunners continued to fire from the only remaining nasal cannon. All other crew members under enemy fire fought for the survivability of the ship, extinguished the fire, tried to repair the holes, which became every minute more and more. In the midst of the battle, an enemy flag shot down on a gaff was hit by an enemy shell. Immediately, through the flames, the wounded helmsman K. Semenov rushed to the stern and, seizing the flag, raised it high above his head, but was wounded again, the radio operator K. Blinov rushed to help Semenov. The flag was flying over the ship again. All secret cards were destroyed, Lieutenant M.M. Bukin saved the secret documents of the navigator service, and the sailor A.I. Yanin saved computer logs. Wounded in both hands, military trooper I.T. Petrusha continued to provide first aid: he stopped the bleeding, fixed fractures, supervised the work of combat medics. With the help of the sailor AP He removed Sharov from the sinking ship of the last of the wounded - the foreman of the 2-th article of I.F. Bardan. By 5 h 15 min patrol ship had a roll of 15 ° to starboard. Fifteen minutes later, Lieutenant LA Rybakov ordered the launch of the boat, the holes in which were hammered with jackets and caps. First of all, the wounded were transferred to the boats. The surviving personnel did not leave the ship until the Fog lay starboard over the water. At the command of Lt. L. Rybakova crew left the sinking ship. Rybakov himself, leaving the ship last, ordered the oarsmen to pick up the crew, and only after everyone in the water had been picked up, climbed into the boat.

In 5 hours of 50 minutes, the waves of the Barents Sea closed over the wounded ship, with a proudly raised flag.

So ended the dramatic events of 10 August 1941, which unfolded in the Barents Sea at the entrance to the Kola Bay. The survivors were placed at the coastal base of the OVR - in Kuvshinskaya Salma, and the wounded - in the hospitals of Polar, Murmansk. Of the 52 crew members, 15 people were killed and 17 injured.

Ctrl Enter
Noticed oshЫbku Highlight text and press. Ctrl + Enter
We are
Bismarck Hunt (May 1941)Icy embrace of the North. Soviet submariners is dedicated
21 comment
Information
Dear reader, to leave comments on the publication, you must to register.