Ammunition Disposal: Will Italy Help Us? ..

August 12 2013
27
Numerous tragic incidents of recent years related to the disposal of ammunition at the Russian military test sites have led to a search for both a new recycling solution and answers to eternal questions in the style of “What to do?” And “Who is to blame?” And if with the search for an answer to the question “ Who is to blame? ”They cunningly did not make peace, in a number of cases they blamed the explosions and fires during the disposal of ammunition representatives of the rank and file, who smoked, then literally kicked old shells at the test grounds, then with the question“ What are the cases it? ”turned out to be somewhat more difficult. 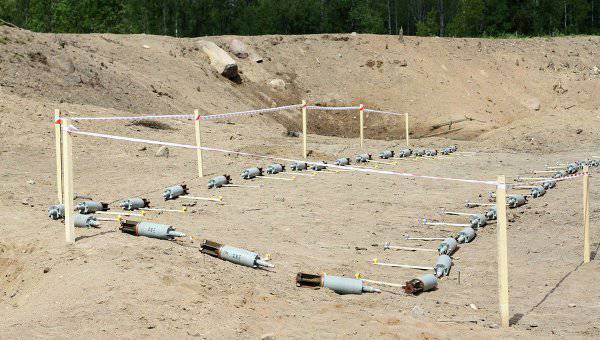 Understanding that “smokers' privates” is only complacency and plus is an extra tick for the military investigation in solving crimes, at the Ministry of Defense, they began to search for a solution, taking into account more complex aspects than the all-suppressing fault of all ordinary sins.

The decision, we must admit, was not born immediately. For its adoption, it took about a couple of dozen “explosive” incidents at storage depots and ammunition disposal sites (in one of the not so long-term articles of Military Review, most of these incidents were presented to readers in the form of a special collection). Let's just say that the birth of this decision takes place literally in front of you and me at this particular moment. What is the decision of the representatives of the Ministry of Defense of the Russian Federation?

The fact is that the main military department of the country decided to make a proposal regarding assistance in disposing of domestic ammunition, attention ... to the industrialists of the countries of the North Atlantic Alliance. Such information was provided by the Deputy Minister of Defense Dmitry Bulgakov. The specific service that the Russian Defense Ministry is going to call for help is ANTO, the NATO logistics agency. The reason for this decision, Dmitry Bulgakov, sees the following: Russian enterprises do not have sufficient capacity that would contribute to the effective disposal of ammunition that remained not only since the Great Patriotic War, but also those projectiles and cartridges that were produced in later periods of time, and which today have lost their relevance for the Russian army (obsolescence, corrosion, marriage, etc.).

Italian Caretta Technology srl is capable of becoming one of those Western companies from the ANTO field that can get the right to dispose of Russian ammunition. Just a couple of days after the statements by the representative of the Main Military Ministry of Russia, the company announced its readiness to demonstrate a technological platform at the next Nizhny Tagil arms exhibition. recycling shells, bombs, mines and their individual components. Сaretta Technology is a developer of a unique technology that can significantly reduce the cost of recycling activities, as well as minimize harmful emissions into the atmosphere, inevitably manifested in the course of disposal of various types of ammunition. It is worth noting that the exhibition Russia Arms Expo 2013 in the Urals will be held in the last decade of September.

Summing up the statements of Dmitry Bulgakov and the statements of representatives of the Italian company, one can conclude that the Russian side is preparing to acquire Italian technologies in order to transform the process of disposing of domestic ammunition from a “firefighter” into, let's say, civilized. But here immediately parallel questions arise. First question: does such civilization need certain individuals of the military department, for whom fires in warehouses and explosions at army training grounds were a good help in conspiracy, let's say, non-transparent spending? Question two: is the said Italian company going to transfer its technologies to the Russian Ministry of Defense or will it insist that the utilization be carried out exclusively by its specialists? Question three: if technologies are not transferred, will it protect Russia from dependence on foreign companies in terms of that “civilized” recycling? The fourth question: what prevents to increase the working capacity of Russian companies, which were used for utilization procedures in Soviet times, and therefore have solid experience of this type of work?

If we talk about Russian enterprises that declare their readiness to start utilization procedures, several of the Ural and Volga companies are distinguished among them: Kopeisk OAO Plastmass Plant, Avangard (Bashkortostan), Pilot Plant in Chapaevsk (Privolzhsky FKP State Ammunition Test Site ") and a number of others. Representatives of the administrative corps of the listed companies declare that the Ministry of Defense reduces funding every year aimed at recycling procedures, representatives of the Russian Defense Ministry say that the financing corresponds to the existing production capacities at enterprises, and all new financial inquiries do not correspond to economic realities and are too extensive, and in fact nothing backed up. The situation is similar to the classic deadlock (and in terms of the state defense order, including) of the last time, when Russian enterprises want to get more money from the Ministry of Defense, and the Ministry of Defense is trying to reduce its own expenses, giving birth to some kind of competition to manufacturers, including foreign companies. And so far, no way out has been found out of this impasse in many branches of military production. Neither punching the table from the side deputy prime minister, nor ministerial shouts help.

It is this deadlock situation that provokes the emergence of thoughts about attracting foreign companies for the disposal of Russian ammunition. Are these words a bluff from the Ministry of Defense? Quite possible. Especially since such a bluff may well justify itself. For starters, those who want to get large amounts of financing to domestic companies that are ready for the disposal of ammunition will be shown to the “fucking mother” in the form of how much Italian technology is “more civilized” and cheaper, and then they can make concessions if Russian plants decide to compete. somewhat reducing financial inquiries.

If the Russian defense ministry seriously decided to use the potential of ANTO for the disposal of domestically produced ammunition, completely ignoring the possibilities and experience of Russian companies, then this looks somewhat strange. In this regard, skeptics may have an additional reason to suspect the officials of the Ministry of Defense of wanting to throw the ends into the water, making the recycling a completely non-transparent event with the possibility of extracting personal benefit from all this.

Ctrl Enter
Noticed oshЫbku Highlight text and press. Ctrl + Enter
We are
Results of the week. "Of course, he is guilty, but he ... is not guilty ..."Ammunition Disposal: Efficiency or Safety
Military Reviewin Yandex News
Military Reviewin Google News
27 comments
Information
Dear reader, to leave comments on the publication, you must to register.