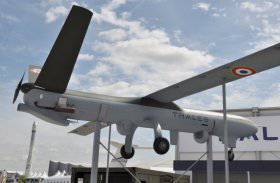 The parliamentary inquiry has shed some light on the state of military unmanned aerial vehicle (UAV) programs in the UK. According to the magazine International Defense Review, Secretary of State for Armed Forces Affairs James Robathan, responding to a parliamentary inquiry, provided information on the status of military UAV programs in the UK during the last 10 anniversary.


In total, the airspace of the United Kingdom in 2006-2013. 2956 flights of four different types of unmanned vehicles were conducted for testing and training. The largest number of flights (2609 flights) were performed by the Desert Hawk Mk III UAV (Desert Hawk Mk III). These flights were carried out over the Otterburn training ground (Northumberland county) and the Stanford training ground (Norfolk county). Most flights were conducted for training purposes.

The British Army from 2010 to June 2013 conducted the Watchkeeper 306 flights. These flights were operated from West Wales Airport (WA) near Aberporth.

According to the publication, the first flight of the "Dr Watcher" UAV (above) above the Aberpoort test site in April 2010, as well as 6 training flights of this device in the first half of 2013, were performed by personnel of the French army.

Another 41 flight was performed by the Scan Eagle and Tarantula Hawk UAVs, and the 27 flights were performed during the period from 2006-2012. and before choosing one of the devices for military trials of the British Navy.

The remaining 14 flights were conducted using the Tarantula Hawk UAV for training purposes.

Ctrl Enter
Noticed oshЫbku Highlight text and press. Ctrl + Enter
We are
US ground forces are considering the purchase of a K-MAX UAV for cargo transportationCommand of the German Air Force plans to adopt the first Euro Hawk RQ-4E UAV in September
10 comments
Information
Dear reader, to leave comments on the publication, you must to register.